A mystery is hard enough to do, but veering between copaganda and glorifying crime enhances the level of difficulty. Newburn #1 spotlights Easton Newburn, a retired cop. He now works as an investigator and problem solver for all of New York's organized crime families while using their information to hand low-hanging fruit over to the NYPD. It's quite a tightrope to walk, and this book shows the character do it with confidence, competence, and relative ease.

Carmine Albano was murdered in his apartment after stealing ten kilograms of cocaine from his own family. The evidence doesn't clearly indicate anyone, and other families might take a swing to establish dominance. Before the streets run red, Newburn is brought in to provide impartial clarity. He's presented here with the kind of detailed, well-informed focus that Vincent D'Onofrio brought to Law & Order: Criminal Intent, a kind of observer who sees what others miss due to his unique perspective and experience. When violence is called for, Newburn doesn't hesitate, nor does he have any challenge getting his point across.

Writer Chip Zdarsky plays this all without irony, and his script is a straight procedural that's elegant in its sparseness. Obeying the law of conservation of characters much like a Dick Wolf show, the angle may be new, but the meat of the investigation is not. Suppose you liked the grim certainty of Michael Lark on Gotham Central or the patient determinism of Sean Phillips on Criminal. In that case, this vibe will feel familiar and right up your alley, courtesy of Jacob Phillips, Frank Cvetkovic, Nadia Shammas, and Ziyed Yusuf Ayoub.

If gritty procedurals with a soupçon of noir are your bag, you should buy Newburn #1 right now. If you've seen a million episodes of Law & Order, you'll feel like this is a ride along with a smarter, more morally flexible Lennie Briscoe. If the idea of that's not getting you pumped, you might not be on board for this. RATING: HONORABLE MENTION

Newburn #1
By Chip Zdarsky, Jacob Phillips, Frank Cvetkovic, Nadia Shammas, Ziyed Yusuf Ayoub
EASTON NEWBURN is a private detective without loyalties, investigating conflicts between rival crime factions while collecting enemies along the way. In this DEBUT ISSUE, a man is murdered after stealing from his own mafia family, but they aren't the ones who ordered the hit. This new ONGOING SERIES from CHIP ZDARSKY (Daredevil) and JACOB PHILLIPS (THAT TEXAS BLOOD). 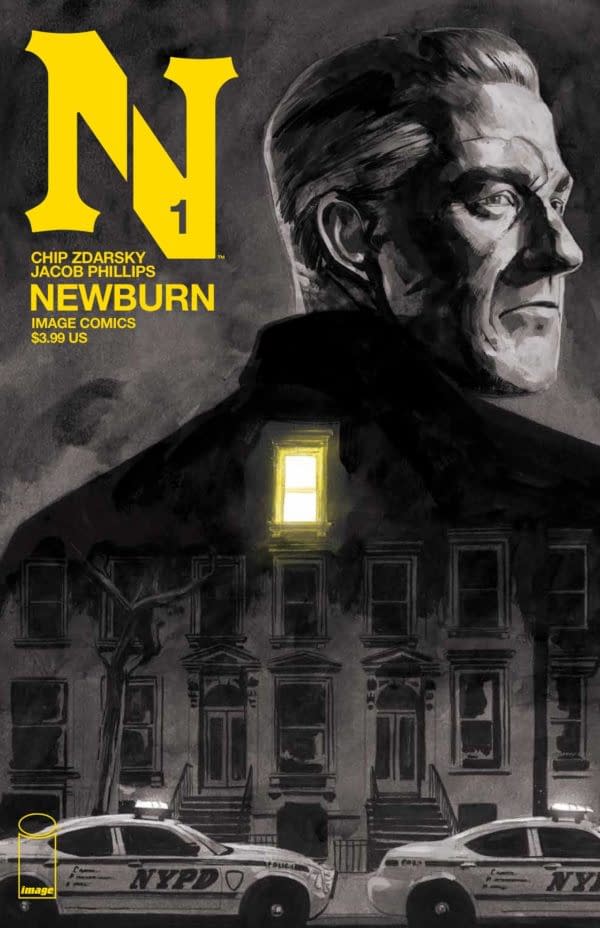 Review by Hannibal Tabu
7.5/10
Hard-boiled fiction with a clever, innovative perspective brings a veteran and a neophyte into the murky world of New York’s world of organized crime.
Credits
Editors
Allison O’Toole

Back in 2003, Bill Jemas was to do a 5G on Marvel by merging their Ultimate and Marvel universes. Maybe. One year later, he was gone...

Fantagraphics To Publish The 1963 Annual by Don Simpson in 2023, Ish

It's been thirty years since Image Comics published the satirical series 1963, and failed to publish the final issue, the 1963 Annual.

Lois Lane Is The New Editor-In-Chief Of The Daily Planet, Temporarily

Lois Lane stands at the doors to her Daily Planet office, as the new Editor-In Chief of the newspaper. What will HR say to her being married to Clark Kent?

Greg Capullo Asks For Gossip To Begin Over Drawing Wolverine

Looks like Greg Capullo will be drawing Wolverine for Marvel Comics, just as soon as he has finished with his creator-owned Creech III.

Another six-figure seller from Dynamite and Disney with Darkwing Duck #1 out this past week. More to come?