You'll find a clever done-in-one crime story in Newburn #5, which takes the former cop turned mob peacemaker into a place where he's in the most danger: prison. With an intriguing new backup story, this issue steps up in a big way.

Normally, the lead character enjoys a unique variant of diplomatic immunity — he is given virtual carte blanche by the NYPD and the city's crime families in exchange for keeping the peace and giving each party justice when wronged. All this ends when he is sent to jail for a murder he claims he did not commit, ending his usefulness to all powers and sticking him in danger from the very people he put behind bars. All of this leads to a very surprising and labyrinthine set of events that may be the best comic book mystery in some time and definitely the smartest issue of this already enjoyable series thus far.

The script from Chip Zdarsky never lets on what it's really doing until it's far too late for you to do anything but marvel at its brilliance. The artwork from Jacob Phillips and Toben Racicot brings the claustrophobic confines of a penitentiary to grim, almost monochromatic life with deftness and immediacy.

The black-and-white backup story follows a horror-themed amusement attraction and young people trying to find themselves in the face of real-life horrors. The visuals from Soo Lee and Toben Racicot are part Exorsisters and part Strangers in Paradise, while the script from Casey Gilly makes these young lives seem real and vibrant.

Overall, you get a seriously enjoyable and well-crafted body of work with this issue. The backup isn't as self-contained, but it surely gives you some story meat to enjoy with your literary meal. RATING: BUY.

Newburn #5
By Chip Zdarsky, Casey Gilly, Jacob Phillips, Soo Lee
Newburn finds himself in his most dangerous position yet – in prison, surrounded by the men he helped put there. PLUS: A thrilling new backup story BEGINS! In 'SPOOK-A-RAMA' by GILLY and LEE, if the cops won't investigate her best friend's murder, can Ronnie solve it herself? 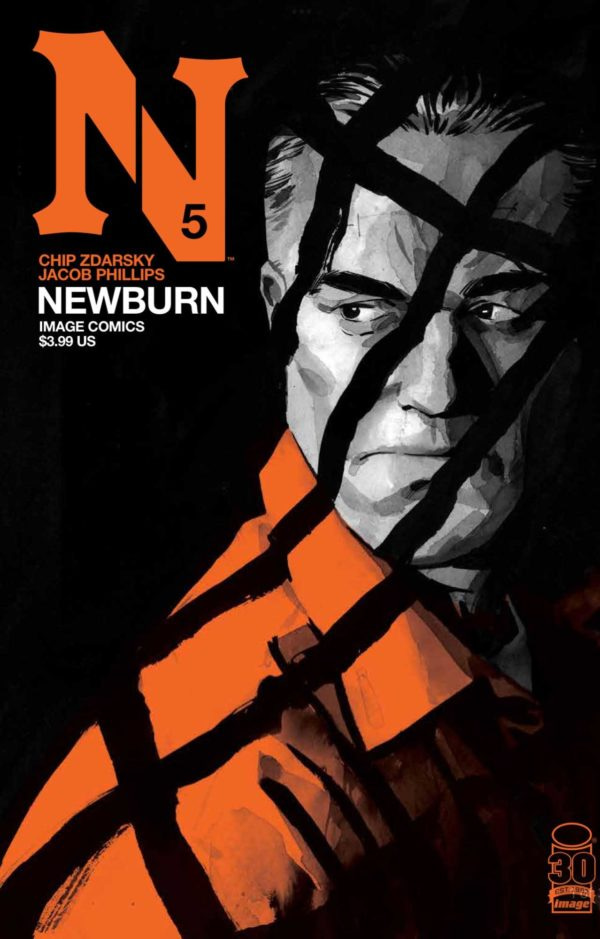 Review by Hannibal Tabu
8/10
What happens when the untouchable loses all his security? Getting stuck between the law and the criminals is a bad place, but is it exactly where Newburn needs to be?
Credits
Editor
Allison O'Toole

Star Wars: The Halcyon Legacy #4 Preview: A Plan Comes Together

Lando, Hondo, and Maz are aboard the Halcyon with a plan to steal the crown jewels of Alderaan in this preview of Star Wars: The Halcyon Legacy #4... and the plan is going great!