No, to be clear – JUSTICE LEAGUE #40 is a NEW story thats' set before our run. @robertvenditti #jaimemendoza and @TheDougMahnke are doing something great and their own.

Our story evolves into the project with @GregCapullo (but you can read it w/o having read anything prior) https://t.co/lHoxvUq8CG

Which causes a few continuity wrinkles. So as Batman heads to my home town of London in his Batwing, we learn that Alfred Pennyworth is still alive in this time.

Fine. That fits. Alfred died during City Of Bane, part of the DC Year of The Villain thematic crossover. (UPDATE: It's a flashback. Not that well tagged. This happens after the death of Alfred. It doesn't affect the main issue here). But then…

…Superman has outed himself as Clark Kent. Which means that the whole of Scott Snyder's run on Justice League is also set after the current events in Brian Bendis' Superman books. Even though earlier issues of the Justice League by Snyder featured a Superman very much still in the closet. And events in the Superman comics that happened during the Snyder Justice League run as part of Year Of The Villain…

…which all happened before Superman's big reveal… 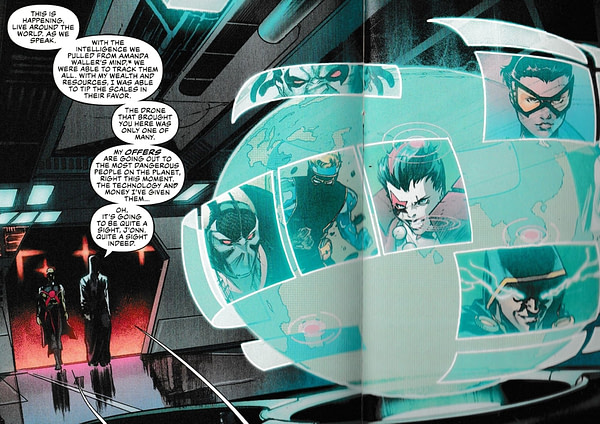 And yes my head hurts. Man, this new DC Timeline is going to have to do some heavy lifting. At least the policemen in Lois Lane #8 today…

At least they all know about Clark and Superman now…

Remember, everything happened, everything matters… including the return of Sonad Yat as a pacifistic Green Lantern diplomat.

Say, I wonder if this scene from Alan Moore and Kevin O'Neill that introduced him is still in his future -or his past – after all the relaunches, retcons and rebirths?

Let's keep an eye on Twitter for any more revelations.

JUSTICE LEAGUE #40
(W) Robert Venditti (A) Doug Mahnke, Jaime Mendoza (CA) Bryan Hitch
The next chapter for comics' premier superteam begins! An unexpected arrival from the stars brings a dire warning to the Justice League: A new breed of conquerors is on the march. Led by Superman's nemesis Eradicator, a genetically engineered, super-powered strike team has come to subjugate Earth. To aid the Justice League, Batman makes the unprecedented decision of enlisting an ancient, unrivaled power, which calls into question who, exactly, is in charge. With the League on unsure footing, will they be ready to save the world?In Shops: Feb 05, 2020
SRP: $3.99

LOIS LANE #8 (OF 12)
(W) Greg Rucka (A/CA) Mike Perkins
As the world comes to realize Lois Lane is also the wife of Superman and mother of Superboy, the DC Universe's most acclaimed reporter finds herself hunted by a deadly assassin code-named the Kiss of Death. The only thing standing between Lois and execution is the Question, but can Renee Montoya stop the Kiss before she fulfills her contract?In Shops: Feb 05, 2020
SRP: $3.99

Justice League #40 and Lois Lane #8 are out today from DC Comics… I bought mine from Piranha Comics in Kingston-Upon-Thames. Piranha Comics is a small south London comic store chain with a small south-east store in Kingston-Upon Thames's market centre, which runs Magic The Gathering nights on Fridays, and a larger south-west store in Bromley, which also runs Magic: The Gathering nights and has an extensive back issue collection and online store. If you are in the neighbourhood, check them out.

DC's Plan For All Your Favourite Batman Characters – Even Tim Drake

Poison Ivy. Cassandra Cain, Stephanie Brown. Just three of the many Batman characters who I get the most comments over. Damian Wayne and Tim Drake are

Batman #108 time... Today, Bleeding Cool ran the news that Something Is Killing The Children #16 had received orders north of 155,000 from comic book

Batman, Superman & Wonder Woman Trinity To Get A Trilogy From DC

Batman, Superman, and Wonder Woman are regarded as "The Trinity" of recognisable superhero names at DC Comics. Both created in the earliest days of DC

The Walking Dead #19 sells on eBay for hundreds of dollars, courtesy of it featuring the first appearance of the character Michonne, originally intended

There was meant to be a Crisis comic book event last year. Heidi MacDonald reported it and everything when re-reporting Bleeding Cool's original 5G

As we previously reported, James Tynion IV and Werther Dell’Edera’s Something Is Killing The Children #16 is the most-ordered issue of the series. The

Marvel has revealed the first look at Carmen Carnero's variant cover for The United States of Captain America #1, launching in June.

Viz Media has released their complete list of titles coming out in July 2021, this time they're including their Blu-Ray and DVD titles. Viz Originals

DC's Plan For All Your Favourite Batman Characters – Even Tim Drake

Poison Ivy. Cassandra Cain, Stephanie Brown. Just three of the many Batman characters who I get the most comments over. Damian Wayne and Tim Drake are

Batman #108 time... Today, Bleeding Cool ran the news that Something Is Killing The Children #16 had received orders north of 155,000 from comic book

You must know Kirby, right? That cute pink blob from Planet Popstar who basically eats everything while staying cute all the way in his own video game

Batman, Superman & Wonder Woman Trinity To Get A Trilogy From DC

Batman, Superman, and Wonder Woman are regarded as "The Trinity" of recognisable superhero names at DC Comics. Both created in the earliest days of DC