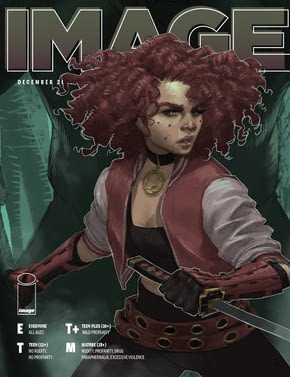 They also included the preview of the first issue, reproduced below. As Bleeding Cool pointed out, the text of the solicitation below describes a protagonist who was "once hailed as a hero," then "slandered and defamed, and her children were taken from her," which in part could be read as a reference to events that have previously been reported from Upchurch's life and career. It reads:

LUCY CLAIRE REDEMPTION #1 CVR A UPCHURCH (MR)
(W) John Upchurch (A/CA) John Upchurch
SERIES PREMIERE
Lucy Claire was once a celebrated hero. But through a series of sinister events, she was slandered and defamed, and her children were taken from her. But when an old danger re-emerges, Lucy will have to take on the mantle of hero once again in order to right the wrongs of her past and-above all else-find a way back to her children.In Shops: Dec 11, 2019
SRP: $3.99

Lucy Claire: Redemption #1 is to be published by Image Comics on December 11th. You can read a preview of the comic book in question below.