Sean Hannity is an American talk show host and conservative political commentator, host of The Sean Hannity Show, a US-syndicated talk radio show and the commentary program, Hannity, on Fox News. He has a reputation for promoting conspiracy theories, such as Birtherism, claims that the murder of Seth Rich was part of a conspiracy, and falsehoods about Hillary Clinton's health. An early supporter of Donald Trump, he has often acted as a mouthpiece for Trump's messaging, as he speaks to Trump most weekdays. This includes criticizing the media, attacking the special counsel inquiry and discouraging social distancing as coronavirus hit. He has spoken at the president's lectern during a Trump rally and White House advisors have characterized him as the "shadow" chief-of-staff. His current coverage is nothing new, trying to draw attention to what Trump and Fox News are trying to call Obamagate, and urging states to control the current protests with whatever force or means are necessary. All the time while wearing a Punisher Skull badge.

Not only that, it's a Punisher Stars And Stripes lapel pin, featuring the flag of the USA laid over the symbol of Marvel Comics vigilante serial killer, The Punisher. But it's not the only one he owns, back in April, in a report tweeted out by Donald Trump, he was wearing a silver Punisher skull pin then as well.

It was taken as a reference to QAnon, a far-right conspiracy theory, detailing a supposed secret plot by an alleged "deep state" against Donald Trump and his supporters. The theory has falsely accused many actors, politicians, and high-ranking officials of engaging in an international child sex trafficking ring, and has claimed that Donald Trump feigned collusion with Russians in order to enlist Robert Mueller to join him in exposing the ring and preventing a coup d'état by Barack Obama, Hillary Clinton, and George Soros.

Bleeding Cool has covered the increasing use of the Punisher logo by police, military and militia groups, and those promoting QAnon theories. Marvel Comics has been fighting them in the courts when they've tried to trademark it, actors have criticized it use, police commissioners have also criticised their use and comics creators have divided over its use. Marvel has even addressed this in the comics, with the Punisher threatening police who use his symbol. 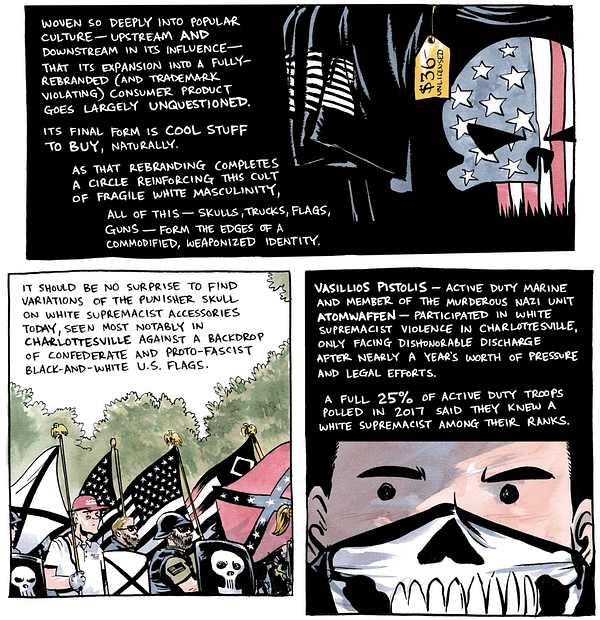 Now it seems to be in rotation on Sean Hannity's lapel. Maybe someone could ask him if it's a Qanon thing, a militia thing, a police rights thing, or support for serial killers? Punisher creator Gerry Conway stated before, "Conspiracy theories are a result of irresponsible Fox "News" personalities like ⁦@seanhannity⁩, ⁦@JudgeJeanine⁩, ⁦@lauraingle⁩ and ⁦@TuckerCarlson⁩ giving voice and approval to fringe lunatics. Shame on #FoxNews and the #Murdochs" while as to Sean' badge of choice, saying "The Punisher would kick @seanhannity's pasty white ass and make him cry like the witless baby he is, then tear off that Punisher logo pin and make him eat it. #PunisherHatesNazisAndWhiteSupremecists."

Although, the Trump Punisher Skull pins are no longer for sale. Which means there is no opportunity for Sean Hannity to level up. Maybe Marvel lawyers had a word about those?

All sorts of people are curious regarding the latest Black Flag back-and-forth over #Acetategate. It's become like a soap opera, with Bleeding Cool seeing

Feel Like a Sucker With Black Flag Comics at Fan Expo Boston?

People going to FAN Expo Boston yesterday were treated to a strange sight at the Black Flag Comics/Infinite Black Publishing booth. The banners were up,

It was one year ago that Bleeding Cool, reported that "Scott Snyder Launches Substack Writing Classes For $7 A Month". With Scott telling us; For $7 a

As the initial Substack Pro comic book creators hit the second year of their subscription deals, they no longer get a grant from Substack, instead, they