Black Adam is derivative as it relies heavily on the foundation built by superhero movies of the last ten years, and some standout moments like Dr. Fate or Cyclone's powers aren't enough to make it anything other than fine.

Director: Jaume Collet-Serra
Summary: Nearly 5,000 years after he was bestowed with the almighty powers of the Egyptian gods — and imprisoned just as quickly — Black Adam is freed from his earthly tomb, ready to unleash his unique form of justice on the modern world.

Black Adam Feels About A Decade Too Late To The Party

The modern superhero boom has been going on since the early 2000s after the 1-2-3 punch of X-Men, Blade, and Spider-Man brought the genre to a new level. It went up again once Marvel entered the game, and Christopher Nolan took one of the most well-known superheroes in a fresh direction that audiences and critics ate up. Since then, the genre has been evolving and changing because that happens when something becomes as ubiquitous as comic book movies. Black Adam has been in varying stages of development since the 1-2-3 punch days, and star Dwayne Johnson has been talking about Black Adam since around 2008. If the movie appearing on screen is anything to go by, this script was written somewhere about 2010 and has not changed much since it feels like a response to phase one of Marvel.

In many ways, Black Adam tries to be The Avengers in terms of structure and also in the sense of just being one giant firework show. This isn't a movie for character development; this is a movie of spectacle, and tapping into the humanity of Black Adam or the Justice Society is something no one here is really interested in. That is something that DC and Warner Bros. seem to have trouble with across the board regarding its powered characters; they are superheroes and gods first, but humans second. Humanity is never a central factor in the story, so the characters always feel like extremely overpowered action figures, hollow and plastic. Black Adam's backstory is that he's a slave and a father who was reborn a god, but despite those extremely traumatic and personal things, we never really explore them. The man might have been born Teth Adam, but that might as well be a title for all the meaning and connection he seems to have to it. The movie tries to put all of the humanity on Sarah Shahi and Bodhi Sabongui, but it's some heavy lifting, and, well, they are only human.

DC Superheroes Are Gods Above All Else, And Humans Second

If that is how DC wants to approach its characters, by making them gods above all else and disregarding the human element of the character, then they need to change the script because they are still writing movies like we have any attachment to these people. There has to be a different approach, but it appears that no one DC has hired for the powered characters has yet figured out how to write for them. So Black Adam goes through all of the motions we've seen before; we get a prologue, the first act action scene, the versus fight, and the villain fight at the end. This villain shoots up red light into the sky, not blue, so maybe not entirely derivative. It brings nothing new to the table regarding its fight scenes; its action beats, its story, and its structure; we have seen all of these pieces before, and these pieces are fine because they have been working for ten years. Of course, they work just fine here as well, but to elevate yourself above "fine," you have to do something different, and Black Adam does not. Black Adam even does what every other superhero movie does and completely wastes an extremely talented actor, in this case, Marwan Kenzari, as a throwaway villain who only becomes the problem at the end. The movie has big ideas about exploring the idea of how conquering, colonialism, and capitalism are forms of modern-day slavery, but instead of following through on them, decides that ending the world with superpowers is the way to go.

However, what DC does need right now is a foundation to build on, and Black Adam could be an all-right foundation to build on should they choose to. Black Adam himself needs to fight Shazam at some point, and the tonal juxtaposition between those two characters is going to be a marathon for whoever takes on the challenge. The Justice Society is all pretty well executed as well, with Dr. Fate being the absolute standout. Pierce Brosnan is clearly having a ball running around with this goofy-looking gold helmet, making hand motions, occasionally staring into space, and being cryptic. He's the best part of the movie, and his powers are fascinating to watch on screen. We've seen other magic users on the big screen this year, but Fate looks utterly different, so DC did a good job setting him apart. Cyclone is also one of the standouts. Their costume will be the cosplay outfit of 2023, and how they execute their wind powers looks fantastic. Quintessa Swindell is a movie star; put them in more movies immediately. Hawk Man and Aldis Hodge have the thankless role of being the foil to Black Adam, but his character is well done, and it would be nice to see more of him. The weakest link is Noah Centineo as Atom Smasher; he's just doing a Paul Rudd as Scott Lang impression without any charisma. However, he's a legacy character, and those are fun to explore.

Black Adam isn't the worst superhero movie of the year or the one with the most potential that missed the mark. It's another big superhero movie that does everything everyone has been doing for the last ten to fifteen years. If you're showing up to see Black Adam punch some people and for the Justice Society to look pretty cool, then have your movie, but you're expecting a superhero movie that will elevate the genre in any way? It's not here, and this movie will likely only be remembered for the mid-credits scene that will be the talk of the town for weeks. 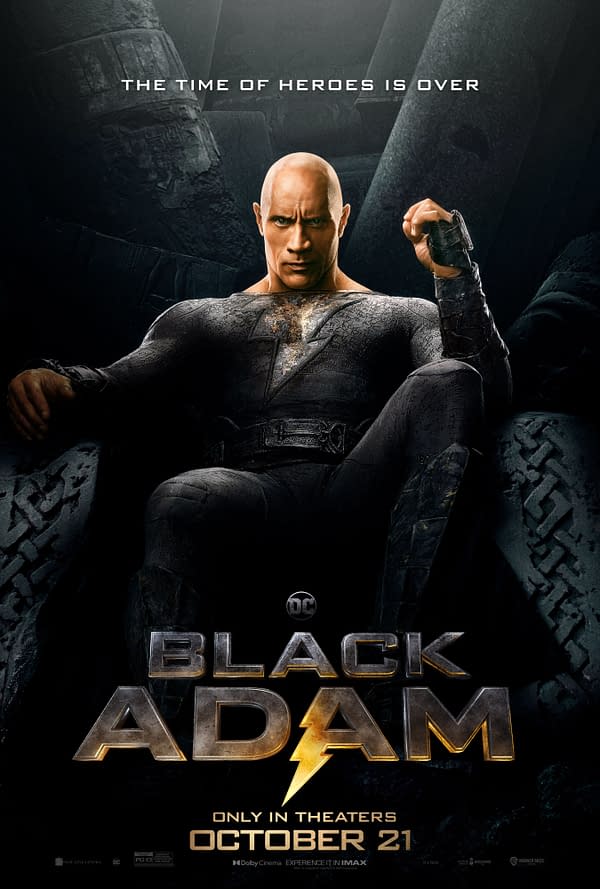 Review by Kaitlyn Booth
6/10
Black Adam is derivative as it relies heavily on the foundation built by superhero movies of the last ten years, and some standout moments like Dr. Fate or Cyclone's powers aren't enough to make it anything other than fine.

The Blumhouse Five Nights At Freddy's film has begun production under the working title Bad Cupcake, according to a tweet from Jason Blum.