Strange World isn't anything special, and while it is more clever than you think it will be by the end, it is destined to be forgotten as it will likely have a hard time finding an audience.

Directors: Don Hall and Qui Nguyen
Summary: The legendary Clades are a family of explorers whose differences threaten to topple their latest and most crucial mission.

When the first teasers or trailers for Stranger World dropped, the art design made it look like the world was designed by someone who just went absolutely insane with no direction. It's a fun look, and while there were some central ideas to all of the things we saw, it didn't look like anyone really gave the artists any guidance. It looked like what would happen if you gave little kids markers and told them to design a world. That's a fine way to design a movie, but that means that things end up looking slightly off. However, some things were ingenious about the designs before we knew their context. Splat is one of them; Splat is an ingenious design because while it can become more complex, it is also basic enough for any kid to draw their own version of Splat. That is the kind of character design that Disney used to excel at but doesn't really do that much anymore.

If there is a place where Strange World thrives, it's that the art design looks like someone let that five-year-old within all of us go to town. This design aesthetic is revealed to be very deliberate once you know the context of the film. It's something that is begging for you to go back and watch it again once you know said context, which won't be spoiled here because it's sort of like a magic eye painting. What looked like random shapes became a very deliberate and coherent whole.

That being said, aside from that very clever use of art design that comes together in the end, there isn't much here for Strange World to hang onto. It's not that the movie is terrible, but more that the whole doesn't add up to the sum of its parts. There is some great LGBTQIA+ representation there and treated like it is a normal part of life. It isn't the entire part of the character's personality, and that is the kind of representation that queer people want to see. Being queer isn't the defining part of someone's life; it's just a part of them, and being queer is just part of this character's life. No one treats it as anything special or even worth commenting on. It's just part of life.

We see family dynamics portrayed as trying to heal the wounds of generational trauma. So often, parents will overcorrect when trying to avoid the mistakes of their own parents but then make the same mistakes anyway. It's a story that we have seen often and one that we saw explored in a better movie earlier this year with Everything Everywhere All At Once. Strange World does its best to explore that kind of dynamic, but it doesn't dig into the ideas as much as it wants to. In fact, all of the emotional beats of this film are undercut by the fact that it is waiting for your eyes to focus on the magic eye painting and for the art direction to make sense and for this world to be coherent.

Disney Animation doesn't bring out the waterworks as reliably as Pixar does, but they usually will hit you in the feels. However, Strange World just can't seem to get there, which is surprising. The creative behind this film worked on Big Hero 6 and Raya and the Last Dragon, both of which feature third acts that often render grown adults into blubbering messes. However, there isn't a moment in Strange World that gets close to Baymax staying behind to save Hiro or Raya and her friends slowly turning to stone from the Druun. The movie also doesn't grapple with the existential questions of its concept nearly as much as it could. When the magic eye painting comes into focus, the implications are massive, but no one really seems to come to terms with them. Or if they do, it is done off-screen and at the end of the film during the epilogue. You cannot present something that would change how the characters would see their entire existence and then not have any of them address or even react to it.

Strange World has some good ideas at its core, but it gets so caught up in justifying its own concept that it forgets to be truly emotionally moving. It's likely going to have a hard time finding a theatrical audience, and while some will find it once it hits streaming, this won't be another Encanto for Disney. Perhaps, over time, people will come to appreciate it more in the same way people have come to appreciate Atlantis: The Lost Empire, Treasure Planet, and Titan A.E. long after they bombed at the box office. Perhaps Strange World should have been a short instead of a theatrical feature where the art design and the clever twist could have been the focus, and we didn't need to have as much emotional payoff. Either way, the final film is fine. 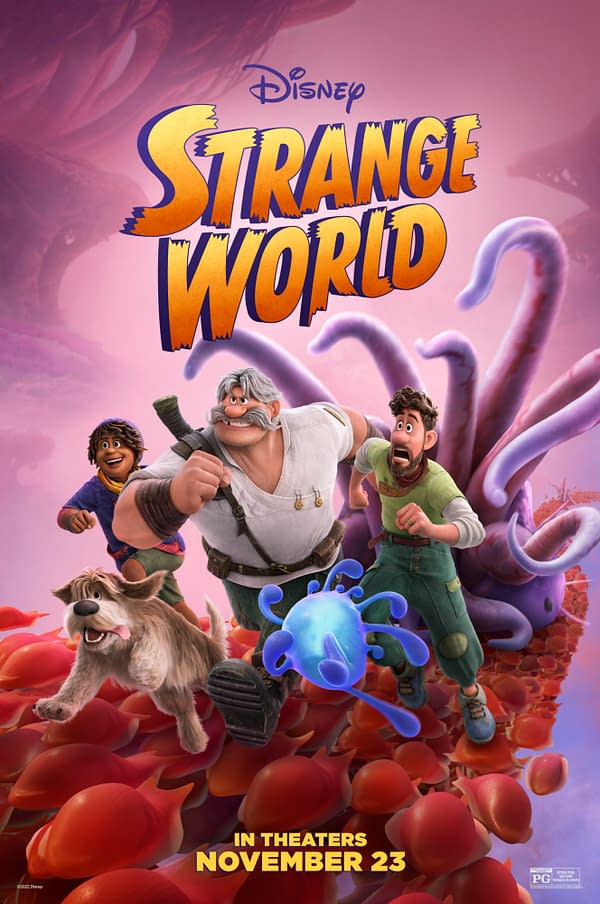 Review by Kaitlyn Booth
5.5/10
Strange World isn't anything special, and while it is more clever than you think it will be by the end, it is destined to be forgotten as it will likely have a hard time finding an audience.