While many think Deadpool created the spark Ryan Reynolds needed to enter his career renaissance, we may yet see even more greatness from his talents due to his collaboration with director Shawn Levy. The Adam Project is their follow-up to 2021's Free Guy for 20th Century Studios, following up their enduring video game action-comedy with something more grounded in science fiction for Netflix. In this case, a fighter pilot Adam Reed (Reynolds), travels back in time to meet his younger 12-year old self (Walker Scobell) and tries to prevent the technology from ever existing since his father (Mark Ruffalo) is the renowned scientist behind the research.

Written by Jonathan Tropper, T.S. Nowlin, and Jennifer Flackett, much of the script, particularly between Reynolds and Scobell's characters, felt like an extension of Reynolds' schtick and wit. Don't get me wrong; the two can be mistaken as father-and-son, which is the inherent theme of the film. Their magic and comedic timing are gold. I can't also be surprised how much Scobell's worked into the Netflix marketing as part of bits working off of Reynolds. In addition to their chemistry, you get a 13 Going on 30 reunion between Ruffalo and Jennifer Gardner, playing Adam's parents. While both are also known for their Marvel roles playing Hulk and Elektra, respectively, they're more restrained physically, providing the more light-hearted elements.

While most will get caught into the father-and-son themes, Gardner's role as Ellie is just as important, even if, at times, it's a little underutilized. Zoe Saldana plays Laura as the female lead, but it serves moreover as a placeholder to build upon the action sequences. Taking her out of the film wouldn't really affect the plot other than to give Reynolds' Adam a love interest and a tie into his future. The primary villains are Catherine Keener's Maya Sorian, a conglomerate that funded Louis' (Ruffalo) research to make time travel possible, and her henchman, Christos (Alex Mallari Jr). There's nothing really special about them that you haven't seen any stock action movie clichés.

Keener fulfills the villain role adequately with the pomp and circumstance you expect, but there's nothing in the writing that gives her layers the way Matt Leiberman and Zak Penn wrote Taika Waititi's Anton for Free Guy. With a better script, Keener has the capability to pull off the charm that Kathryn Hahn did in WandaVision. Ultimately, The Adam Project is a fun family film that rides on Reynolds and Scobell's chemistry, but not much else since it kind of wastes its supporting cast. 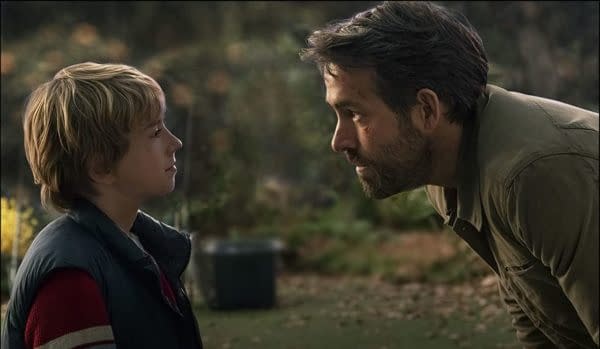 Review by Tom Chang
6/10
Atypical of Ryan Reynolds vehicle in Netflix's "The Adam Project" filled with warm fuzzies from the father-son relationship themes. Great family film directed by Shawn Levy if it didn't feel like the co-stars with Mark Ruffalo, Zoe Saldana, Jennifer Gardner, and especially Catherine Keener didn't feel underutilized. Walker Scobell shines in the getting as quality lines as I expect a 12-year old Reynolds would get.
Credits
Director
Shawn Levy

Star Trek: Discovery star Sonequa Martin-Green breaks down Michael Burnham's journey to being captain, the challenges ahead, and more.