The French Dispatch might be a love letter to magazines, but it doesn't use its own framing device as well as it could, so it isn't a cohesive film. Instead, it is a few short films that are well-acted and written but don't add up to much.

Director: Wes Anderson
Summary: A love letter to journalists set in an outpost of an American newspaper in a fictional twentieth-century French city that brings to life a collection of stories published in "The French Dispatch Magazine."

There is nothing more frustrating than when you can see the potential for a movie to be excellent, but there are just one or two decisions that are made that keep it from achieving that greatness. The French Dispatch is very much one of those movies where you can see the potential, but one or two creative decisions have kept it from being great. For this movie, it's not taking advantage of its own framing device. The way this movie is set up is that it's an anthology film, with each of the stories that we are seeing being articles that are published in the issue of the magazine itself. At the end of each of the stories, we see Bill Murray as Editor-in-Chief Arthur Howitzer, Jr. come up on screen, and he gives his writers some brief feedback about how they could change or improve the story, and then we move on. However, not using that framing device in a more active way feels like a massive missed opportunity here. We don't learn anything about Howitzer, not really, but some back and forth with the writers would have been interesting.

For example, in the final story, we see Howitzer give some feedback to Jeffrey Wright's Roebuck Wright, and we see a moment that he cut from the story played out on screen. That sort of thing should have happened throughout The French Dispatch. Cutting back to Howitzer giving his writers feedback, maybe even verbally suggesting his rewrites in a way that slightly changes the writers' stories, these sort of things would have made the movie feel more cohesive because we would have seen Howitzer interact with the very big personalities of his writers. It would have given these stories a feeling of continuity that is lacking from the final product that we get on screen. Aside from narration over the stories, characters sometimes break the fourth wall and the film jumps to cartoon styles that feel right out of the funny pages at times, and it isn't enough to make this film feel like a film. There is another missed opportunity in the final scene that won't be talked about in detail here, that also could have brought the whole cast together and took advantage of some very talented names that only got minutes of screen time.

It's a shame that the overall story of The French Dispatch doesn't entirely come together because everything else is good. This is Wes Anderson, and if you're going to an Anderson movie, you know what you're getting into. His distinct style and voice are all over this movie. All of the short stories are really well directed, and, as previously said, they do use the framing device in interesting ways. Most of the writers are the narrators of the stories they are telling; the characters break the fourth wall, we switch between black and white to cartoons to full colors all the time, and sets sometimes move as if they are on stage instead of in a movie. These are all entertaining and interesting devices that help you stay engaged with these various characters and the stories that they are telling. Fans of Anderson's style will find plenty to enjoy here.

The stories themselves are interesting as well and do capture the various sections that you would see in magazines. An overall story about the state of the city, a story about an artist, a food critic, local student activism, these are the types of stories that you would see in magazines like this. All of the actors that we see in these stories do a great job of portraying their various characters. This is a massive cast with some huge names that are clearly having a ton of fun with the various exploits and people that they are writing about. You do get a sense of personality from each of the writers and the way they describe things in their own narration. It's a great way to frame an anthology film, but, as previously stated, it doesn't make the anthology feel like part of a greater whole by the end.

The French Dispatch is similar to another movie that we saw earlier this year, Lamb. Lamb was A24 at its most A24, and The French Dispatch is Wes Anderson at his most Wes Anderson. It feels like a film where Searchlight wrote him a blank check and let him make whatever he wanted. This sort of thing usually works out for Anderson, but something missing from this movie keeps it from crossing from "pretty good" to "great." It's a shame because Anderson is usually pretty good at making quirky and interesting films that can kick you in the gut at the weirdest moment, but The French Dispatch just falls rather short in the end. 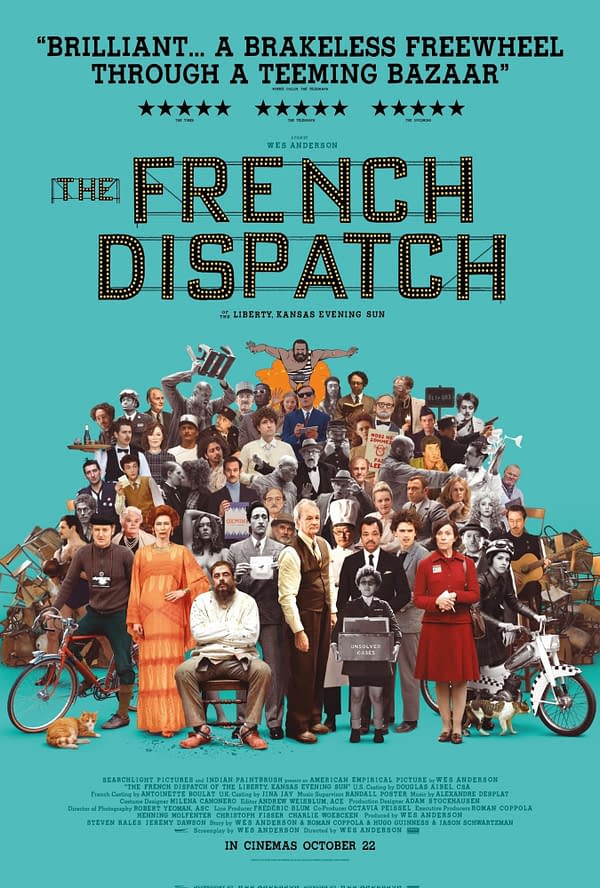 Review by Kaitlyn Booth
7.5/10
The French Dispatch might be a love letter to magazines, but it doesn't use its own framing device as well as it could, so it isn't a cohesive film. Instead, it is a few short films that are well-acted and written but don't add up to much.

Tom Cruise has said that he wasn't ever going to let Top Gun: Maverick go to streaming and that he makes movies for the big screen.

We Have Our First Official Look At Disenchanted

Disney has shared a first look at the sequel to Enchanted, Disenchanted. It is set to stream to Disney+ this Thanksgiving.

Wonder Twins powers, activate! Form of...a canceled movie at HBO Max. It is now being reported that the Wonder Twins movie is not moving forward.

Tom Cruise has said that he wasn't ever going to let Top Gun: Maverick go to streaming and that he makes movies for the big screen.

We Have Our First Official Look At Disenchanted

Disney has shared a first look at the sequel to Enchanted, Disenchanted. It is set to stream to Disney+ this Thanksgiving.