The King's Man isn't as good as the first one, but it's a significant improvement over the sequel and is also its own thing at the same time. It's a bit too long and the pacing is off, but there are some fantastic action scenes and it's more fun than it isn't.

Director: Matthew Vaughn
Summary: In the early years of the 20th century, the Kingsman agency is formed to stand against a cabal plotting a war to wipe out millions.

Kingsman: The Secret Service was lightning in a bottle back in 2014, and much like any other franchise, the sequel and the now prequel have been trying to capture that lightning a second time and mostly failing. Kingsman: The Golden Circle is almost universally regarded as a very bad movie, and this prequel has been sitting in development hell for years. Thanks to the Fox buyout and COVID-19, The King's Man has seen ten different release dates before finally making it to the big screen this month. It's not as good as the first one, so the franchise lightning will have another attempt on it with the fourth movie [tentatively called Kingsman 3 right now] that is reportedly set to start filming next year. However, as the movie progresses, it feels like it might not want to be the exact same brand of lightning in the first place. In fact, it sometimes feels like director Matthew Vaughn wanted to make a ridiculous World War I movie, and this was the only way he could make it happen.

In the days of franchises, sometimes this is the only way to make a script come to life. However, if you're coming into The King's Man looking for a lot of details and hints about the organization that we're watching the founding of, there really isn't that much. We see it come together and the first version of it, but despite the title, that doesn't appear to be Vaughn's primary point of focus in this movie. He has a story about a father and a son, the horrors of war and what it means to be a gentleman.  It's also about coming to terms with how being British nobility is actually the least gentlemanly thing in the entire world [because of colonialism]. The movie sometimes loses its focus, especially in the second act, and has a real problem of meandering around as it tries to make its way to the final fight.

That is where the pacing issues come in. The first act of this movie doesn't feel that long, but the second seems to go on forever. It makes a movie that is just over two hours feel a lot longer than that. World War I was extremely complicated, so of course, it would take a lot to pull it all together. However, there had to be some way to tighten up that second act and fix the pacing issues because once we get to the "final" fight and all of the setup is done, it's a lot of fun. We understand the stakes, we know why people are invested in all of this, and Vaughn employees some really interesting camera tricks that are fun to watch.

The fight scenes are generally really good. There have been several clips that show the fight against Rasputin (Rhys Ifans). The fight includes Rasputin using various forms of Russian ballet to move around that is just awesome to watch. While the choices that Ifans and Vaughn make in The King's Man for Rasputin don't always work, and there is either too much or not enough of him depending on what you think of said choices, that fight scene is incredibly well done. Vaughn also takes us to the frontlines of World War I, and there is an absolutely brutal knife fight on No Man's Land that is just hard to watch in every single capacity and really captures how terrible those trenches truly were. Finally, everything about the third act and the final fight scenes is excellent as we see stuff like a first-person point-of-view sword fight and some things with heights that will give people serious vertigo.

Some of the cast comes out of this a lot better than others. Gemma Arterton gets the shortest stick as her character of Polly is not given nearly enough to do and is left out of large portions of the action scenes despite being a certified badass herself. Harris Dickinson really captures that too earnest for his own good mindset of young men out to prove themselves in that time period with Conrad, and you want to smack him upside the head half the time. Djimon Hounsou is also a lot of fun as Shola and his knife fight scenes are some of the more brutal in the entire movie. However, it's Ralph Fiennes that really holds this thing together. Much in the same way, it was unexpectedly fun to see Colin Firth be an action hero in the first two movies; it's a ton of fun to see Fiennes get to play that character here. He's always been highly charismatic and fun to watch, but he's clearly enjoying playing a role that isn't offered to men like him anymore.

If there is a significant departure that fans of the first two movies are going to see in The King's Man, it's going to be about the sense of humor. There is some dirty and dark humor in there, but nothing compared to the first two movies in this series. Tonally, it almost feels like a different animal in many different ways. Somehow, the movie that takes place in World War I feels more progressive about sex and race than the two movies that took place in the modern-day. It makes The King's Man feel less connected to the two other films and more of a stand-alone movie, which could be a good or bad thing depending on your opinion of the series and the movie as a whole.

The King's Man isn't going to breathe new life into this franchise, but fans of the previous two movies are probably going to have a good time with this one. It's different from those other two movies but in a good way.  It's not just a World War I version of the first movie, even if that's what the trailers wanted you to think. The pacing is a bit of a mess; it takes too long to get everything set up, but the third act is a lot of fun, and there are some genuinely great moments that are probably worth checking out. However, this month has a lot of stiff competition, and The King's Man is likely going to have a hard time finding its place at the box office. They really should have held this release until next month because it's not good enough to keep from getting lost in the holiday insanity, and that is a shame. 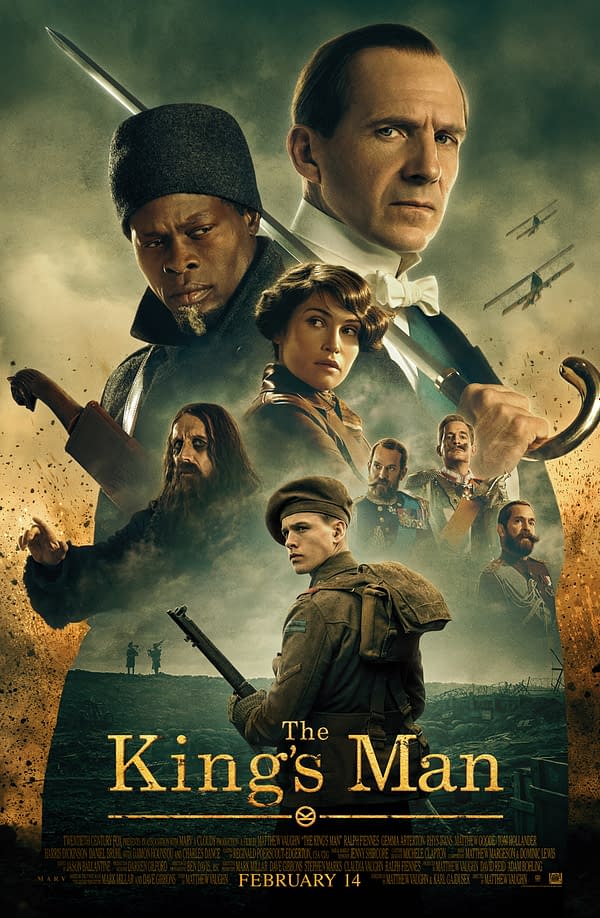 Review by Kaitlyn Booth
7.5/10
The King's Man isn't as good as the first one, a significant improvement over the sequel, but it is also its own thing at the same time. It's a bit too long, and the pacing is off, but there are some fantastic action scenes, and it's more fun than it isn't.