Greetings, comrades! It is I, your El Presidente, back to deliver my thoughts on the latest episodes of my favorite trash TV shows. This week's episode of Floribama Shore, Season 4 Episode 18, is titled The GOAT of All Birthdays. GOAT, of course, stands for Greatest of All Time. A lot of people have said to me, "Your Excellency, when it comes to ruthless dictators, you are the GOAT," but I can't tell if they're saying it because they really believe it, or because they just don't want me to have them imprisoned for life and their family murdered. So of course, I have no choice but to have them imprisoned anyway. It's a vicious cycle, comrades. Haw haw haw haw!

"You could lose your toe." Those were the shocking words, comrades, that an MTV medic told Gus at the beginning of this week's episode of Floribama Shore after patching up his injured toenail. Though Gus and Kirk agreed that the fight that led to the already-injured toenail getting ripped off was just guys being guys, the medic warned that Gus now has an open wound and could risk infection and amputation if he doesn't take care of the injury, which we all know that he won't, so say goodbye to that toe, Gus! Haw haw haw haw!

In all seriousness, an infection can be very serious. It's why I have medical staff constantly check the whip and burn marks of the political prisoners I keep locked up in my dungeon. Do you know how much more money it would cost to keep them alive for torturing if they have a limb amputated?!

Gus wasn't the only Gus messing up in this week's episode. The other Gus, the one Nilsa is having a baby with, upset Nilsa by staying out partying until 3 AM, which Nilsa knew because she monitored their Ring Doorbell camera. After the Angelina video stuff in the most recent season of Floribama Shore, I'm starting to think MTV may have expanded their sponsorship deal with Burger King to include Ring Doorbell Cams as well. Despite a lecture from Nilsa over the phone, Gus 2.0 didn't seem to recognize he'd done anything wrong, which is sure to cause more drama as the season continues.

Comrades, some of the roommates thought that Nilsa was overreacting, but I'm not so sure. What reason does anyone have to be out until 3 in the morning if they aren't up to no good? It's why I impose a strict curfew of 10 PM and have anyone who defies it rounded up and tossed in a jail cell. Maybe Nilsa's fiance is plotting a coup attempt, comrades? Just say the word, Nilsa, and I will have my secret police pick him up right away.

The cast celebrated Jeremiah's 26th birthday during this episode, and in honor of that, Jeremiah vowed to drink 26 beers throughout the day, starting very early in the morning. This led to much funneling as the day went on, including Nilsa pranking Codi by pouring pickle juice in the funnel. Jeremiah did manage to consume all 26 beers before the episode was over, causing me to wonder whether MTV has expanded their sponsorship deal with Burger King and Ring Doorbell Cams to also include liver cirrhosis. Haw haw haw haw!

More impressive than the alcohol consumption, however, is how well Gus and Jeremiah got along, which didn't go unnoticed by the other roommates. Are these two back on track to being best friends again? I hope not, comrades. Their fighting has supplied about 90% of the drama on this show for the past three seasons. If they suddenly start getting along, it will be about as exciting as Jersey Shore Family Vacation!

Part of Jeremiah's birthday celebration included a wing eating contest, with Kirk ordering several levels of hot wings from a local wing joint. Nilsa and Aimee didn't participate. Candace was the first to drop out without trying one of the hottest wings. Kirk and Codi were out next, and Jeremiah ultimately dropped out, leaving Gus the winner. Gus said the victory was worth it, no matter how much burning diarrhea he has to deal with later.

I once lost a wing-eating contest to Vladimir Putin during a dictators get-together a few years back. That man is a hot wing eating machine, comrades! And he did it all without wearing a shirt. Afterward, I had all the chickens in the country rounded up and executed. Those blasted chickens! How dare they make El Presidente look the fool!

The boys also successfully executed their planned prank, which was to wait until Aimee and Candace fell asleep, then capture the two goats that lived outside and lock them in the girls' bedroom. The prank went halfway as planned, with the goats making it inside the house, but Candace escaping, after which she sulked in the car.

No one loves a good prank more than your El Presidente, comrades, but letting livestock into someone's bed room may just be taking it a step too far. Unless they are into that sort of thing, comrades. I'm not one to judge. Jury and execute? Sure. But never judge.

All in all, this was one of the most wholesome episodes of Floribama Shore in quite a while (by this show's standards). It was nice to see everyone getting along, but hopefully, it's only the calm before the storm, because seeing everyone getting along is not why anyone watches this show, comrades. I want to see some trashy people getting crapfaced drunk and exposing all their worst qualities in front of the world! Maybe next episode. Until then, my friends: socialism or death!

Floribama Shore Season 4 Episode 18 - "The GOAT of All Birthdays" 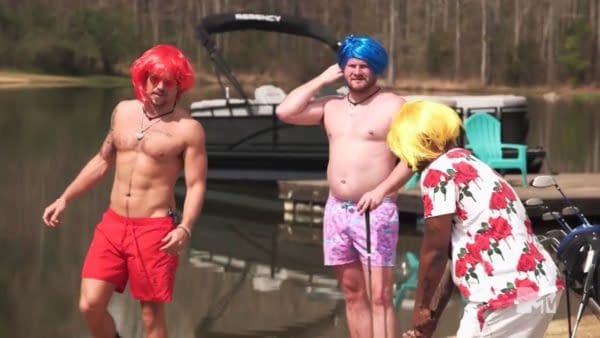 Review by El Presidente
6/10
All in all, this was one of the most wholesome episodes of Floribama Shore in quite a while (by this show's standards). It was nice to see everyone getting along, but hopefully, it's only the calm before the storm, because seeing everyone getting along is not why anyone watches this show, comrades. I want to see some trashy people getting crapfaced drunk and exposing all their worst qualities in front of the world!