Greetings, comrades! It is I, your El Presidente, and you know that I believe that if you start something, you ought to see it through to the end. That's why, when the families of political dissidents I have rounded up for execution by my secret police beg with me to spare them, even presenting evidence that their loved one is innocent, I just laugh and kill them anyway… and maybe toss the families in the dungeon for good measure. It's important to follow through, comrades, which is why, despite an overall lackluster season, your El Presidente still tuned into the season finale of MTV's Floribama Shore.

Floribama Shore Season 3 Episode 25 "See Ya, Peach House" was your standard fare when it comes to season finales for this genre of a reality TV show. The cast spends their final day in the house reflecting on the past season. There were a few new bits, like Aimee paying Gus $100 to lick Codi's foot after he ran through puke and pig poop, Candace paying up the foot rub she owed Nilsa for losing the hot wing eating contest, and Aimee and Nilsa sneaking off for fast food — shockingly, Chick-Fil-A instead of usual sponsor Burger King. And Nilsa even ordered fake pregnant bellies for everyone to wear to see what it's like to be her.

But mostly, everyone agreed that they'd all grown during the season, and specifically, they've grown as a family. Even Jeremiah and Gus managed to get along this season. In the end, Nilsa asked Candace and Aimee to be her bridesmaids. All is well with Floribama Shore…

But here's the problem, comrades: on Twitter, Gus, who has been feuding with his roommates on the social media platform all season, posted:

Put my best foot forward all Szn, some just didn't accept it. Not everyone will accept me. That's ok. Got in a bad accident after filming, 3 surgeries only Aimee, Kirk, and Codi reached out. Then don't get invited to the wedding. Real family we are lol. #MTVFloribamaShore

Gus has also previously claimed on Twitter that there won't be another season of Floribama Shore, blaming fans trying to get him canceled for getting the whole show canceled. He also took issue with a baby shower tweet from Nilsa that tagged everyone but Gus which has now been deleted. He has also retweeted hundreds of tweets agreeing with him. Where was this drama during the show, comrade? More importantly, when the Twitter drama from the cast while watching the season finale is more entertaining than the entire season, maybe it is indeed time to cancel the show and move on.

Here's the thing about reality television, comrades. It's a lot like international despotism. You can't be successful at it and still have everyone like you. Gus may not be loved by all of his roommates, but he would make a great dictator. And not quite as sexy a dictator as yours truly… but close, comrades. Haw haw haw haw! 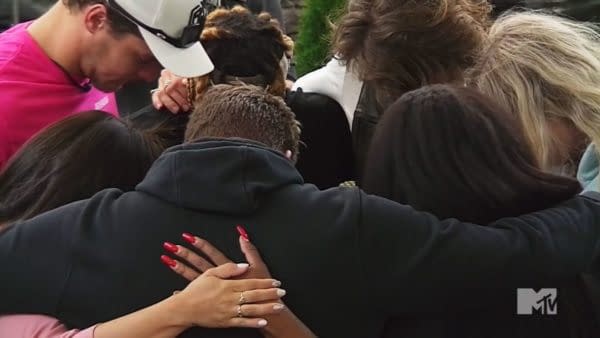 Review by El Presidente
3/10
The season finale of MTV's Floribama Shore painted a rosy but inaccurate picture of the roommates like a family, while Gus provided more drama and entertainment on Twitter than the cast did throughout the whole season.

Adding to the already troubled start of MTV's Jersey Shore 2.0, the original Jersey Shore cast has come out publicly against the reboot.

Report: Khan to Take Over WWE in Stephanie McMahon's Absence

Stephanie McMahon is taking a leave of absence from WWE, and the power vacuum will apparently be filled by... Khan?! But which Khan?!

Sasha Banks and Naomi reportedly walked out of WWE Raw due to creative differences over the main event. WWE issued a statement in response.

WWE Hires a New Lawyer… And It's Not Smart Mark Sterling

Ewan McGregor explained how his return as Obi-Wan Kenobi in the Disney+ & Lucasfilm series is much closer to Alec Guinness' Kenobi.

HBO & Armando Iannucci's space comedy Avenue 5 may be ending with its second season, with the cast reportedly released from their contracts.