The second episode of the HBO Max reboot of Head of the Class "Moms Be Momming" demonstrates a few things. First, this is a prime example of when the teacher lead (in this case, Isabella Gomez) looking almost as young as her student co-stars make for really awkward television at times. Second, it does a wonderful job shifting focus to others within the ensemble. The main arc is how Alicia (Gomez) is trying to convince a reluctant Robyn (Dior Goodjohn) to lead the high school debate team.

The main issue with Robyn is the existing chip-shouldering she's doing with the burden of being a gifted student while meeting the expectations set by her school and family. She buries herself playing video games & hosting her own Twitch channel which as per her "trying too hard" character, Alicia tries to infiltrate by breaching the student-teacher boundary by reaching out through her fighting game of choice. Obviously, as an eager main character as Alicia is, boundaries are already becoming a recurring issue, which likely leads to bigger trouble down the line. The B-story deals with Terrell (Brandon Severs) not only showing interest in Sarah (Katie Beth Hall) but also trying to get her to join the debate team. Sarah also shows reluctance in getting involved as she is still dealing with the pressures & expectations connected with being the principal's daughter.

The third arc feeds off of last week when it comes to students and their social need for acceptance played up more for comedic purposes by Luke (Gavin Lewis) and Miles (Adrian Matthew Escalona). This marks the second episode from Phill Lewis as he directs all but one episode of the first season as a Bill Lawrence favorite. This is also the second episode written by Amy Pocha and Seth Cohen. The trio provides another strong outing providing more depth to the characters letting them shine particularly those by Gomez, Severs, Hall, and Goodjohn. The appearance by Robin Givens was a welcome addition reprising her role as Darlene from the original ABC series. The first season of Head of the Class is available to stream on HBO Max.

Head of the Class Season 1 Episode 2 "Moms Be Momming" 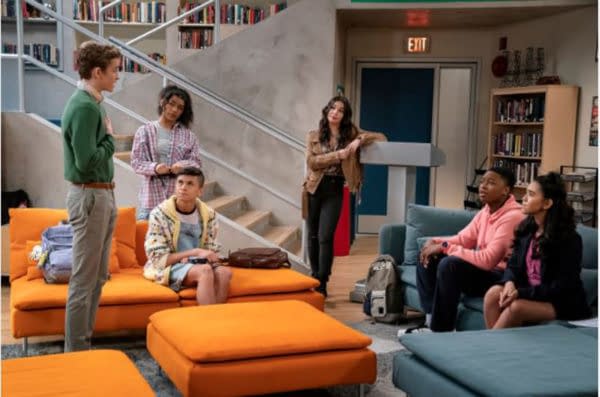 Review by Tom Chang
7/10
A decent follow-up to the premiere, HBO Max's Head of the Class shifts its focus to different characters in this episode, as Isabella Gomez's Alicia is having problems establishing boundaries with her students. Meanwhile, Dior Goodjohn, Brandon Severs, and Katie Beth Hall get their time to shine in this go-around.
Credits
Director
Phill Lewis

Gary Oldman confirms Jackson Lamb will be as awful to everyone as ever in Apple TV+'s Slow Horses Season 2, premiering on Friday, December 2.