In the fifth episode of the AMC series, Kevin Can F**k Himself brought viewers a new side of Allison & a solution from Patty surrounding the local investigation at the pharmacy. Same as in my previous review, in the case you found your way here before watching the episode, consider this the point where I turn on the "MAJOR SPOILERS AHEAD!" sign. Now that that is out of the way…let's get to talking about this episode.

Kevin Can F**k Himself is getting crazier than ever before, from Allison showing a new side of herself at her job and love life to the anxiety we feel alongside Patty. "New Patty", the title of the fifth episode, doesn't just apply to just Patty but it also applies to Allison. The feeling of rooting for her standing up for herself is both thrilling but also nerve-wracking. You wanna feel happy for Allison taking control of her life outside of the identity placed on her by Kevin's sitcom world, and you can easily do so, but there are also consequences with these quick decisions.

The incredibly compelling AMC series reminds you that Allison's actions don't occur in a small bubble. Patty reminds Allison that what she aims to accomplish when it comes to Kevin doesn't just affect a couple people's lives. The character growth of Allison when it comes to recognizing her own strength while acknowledging her oblivious nature is very intriguing. It has so many fun moments mixed in with the drama of Patty's drug dealing being investigated. The narrative is smart and it shifts itself around to continue a smooth story. There's a recognition of what Allison does that can impact Sam, Patty, Kevin, and others. While Kevin is an annoying and dense character (which isn't a bad thing for the story), we can see that Allison has parts of herself still to deal with. She has to come to terms with the complication of working for Sam now, and she has to understand the ramifications of her maintained love for him…or is it truly that? From the sneaky detective staying in town to the up and down solutions to the "Kevin problem", this series is a blast and I'm so excited for the next episode!

Kevin Can F**k Himself Season 1 Episode 5 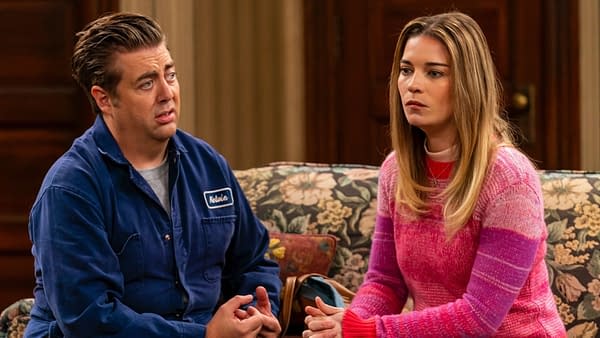 Review by Brittney Bender
9/10
In this week's episode of Kevin Can F**k Himself, Allison and Patty continue evolving as characters that viewers can cheer for while also recognizing their all-too-real faults. AMC has been hitting it out of the park with this series, with each episode besting the previous one- no easy feat.
Credits
Network/Streaming Service
AMC/AMC+

I Love A Mama's Boy Proves When Moms Get Too Close To Sons, It's Weird

TLC's I Love A Mama's Boy offers examples of how "close" can be "too close" for a mother & son, and let's just say it's a whole lot to take.

And That's Why We Drink Podcast Announces "A Haunted Road Atlas"

And That's Why We Drink podcast hosts Em Schulz and Christine Schiefer are sharing details on their May 2022 book, A Haunted Road Atlas.

"The Mayor of Flavortown" Guy Fieri is offering a Chicken Guy franchise to one winner in the Discovery+ series Guy's Chance of a Lifetime.

The Tobin family experiences both the tensions of the holidays & a "Beef Hunt" on the newest second season episode of FOX's The Great North.

In honor of animated series Fairfax, Amazon turned a shop on the hypest street in Los Angeles into Latrine, the show's center of hype culture.