In the sixth episode of the AMC series Kevin Can F**k Himself, many moments from previous episodes come back and face Allison and Patty head-on. Same as in my previous review, in the case you found your way here before watching the episode, consider this the point where I turn on the "MAJOR SPOILERS AHEAD!" sign. Now that that is out of the way…let's get to talking about this episode.

This was an incredibly tense 42 minutes of television. Kevin Can F**k Himself has developed a smooth method for navigating the very opposite worlds of sitcoms and gritty dramas. Kevin's birthday party at the steakhouse, alongside the introduction of Sam's presence in that world when he arrives with his wife, could have made everything ten times more complicated. But without making the audience concerned over direction, the episode guided viewers through the stylized content without shielding them from necessary trouble. The incredible performance by Robin Lord Taylor, who plays Nick, that happens as he arrives as a busboy at the restaurant, creates such fantastic continued stretching of the short rubber band of tension in this episode.

While there continue to be excellent transitions in and out of the Kevin-centered world, the attention to story progression and maturity for Patty isn't left to wither away. Instead, a careful and subtle methodical approach is used in her "date" with Detective Ridgeway. At the end of the episode, we have purposefully mixed feelings about things between them, both hoping for a relationship while also wanting Patty to run in the opposite direction for hers and Allison's sake.

Kevin Can F**k Himself does a wonderful job at having us cheer for the strength of Allison while also shaking out heads out of stress from some of her decisions. The writers did a good job not cradling this character in this critical episode. Because of this, we can more easily identify with the peril and misunderstanding of the "sitcom wife". Even if the episode seemed chaotic at times, it worked wonders for the plot and tying up some loose ends, or better yet undoing them for the fun of it. Sam and Allison running into each other, on the evening they wrote off to each other with vague descriptions, was the icing on the cluster f**k cake of a situation. Kevin Can F**k Himself rewards viewers continuously and also surprises them at the same time. I'm falling in love with the series and this episode solidified it…and I feel for ya Allison, Kevin's got to go.

Kevin Can F**k Himself Season 1 Episode 6 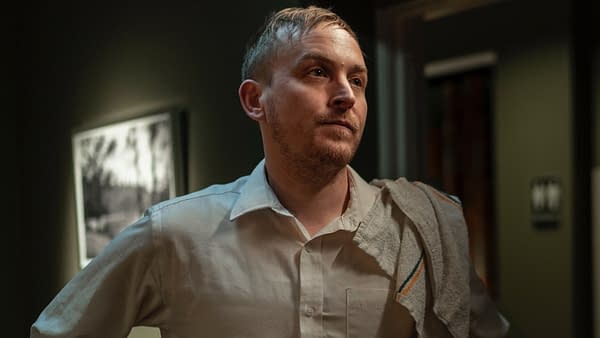 Review by Brittney Bender
9/10
Kevin Can F**k Himself is proving to be a profound example of what television is capable of when it comes to genre-twisting. The sixth episode gives audiences heightened tension, character progression, and moments to remember long after the credits.
Credits
Network
AMC

Yellowjackets star Melanie Lynskey discussed how the cast of the upcoming Showtime series bonded and her character Shauna Sheridan.

Elvira, Mistress of the Dark Comes Out In Newly-Released Memoir

Elvira released her memoir "Yours Cruelly, Elvira", coming out of the closet in the process and revealing her 19-year-long relationship.