AMC's Kevin Can F**k Himself brought us the origin of the relationship between Allison (Annie Murphy) and Kevin (Eric Petersen) but the important parts involved Patty (Mary Hollis Inboden). Warning, potential spoilers are ahead so feel free to watch the episode and return if you'd like so we can dive in on this episode together.

Kevin Can F**k Himself had some excellent points throughout this episode involving Neil (Alex Bonifer), Allison's mother (Peri Gilpin) and some moments between Allison and Patty. What felt like it stuck out in an awkward way was how Tammy (Candace Coke) was fitting into the episode. She didn't have any big moment that progressed the plot forward either between her and Patty or with an investigation that could cause a disruption for Allison's plans. The time in figuring out how to navigate Patty and Tammy's relationship is touch-and-go. It begins to feel indecisive the scenes featuring Tammy. With it only being the third episode of the second and final season, there still may be some hope with this situation.

Kevin Can F**k Himself did a great job at showing Neil's self-worth crumbling without making it the main plot point and potentially overriding some big stuff between Allison & Patty. Allison's experience with death ended up making her vulnerable when meeting Kevin, but a more important point was made before that happened. Patty and Allison meeting before Kevin ever came into the picture was a fantastic step in the right direction for the series. It gave us a look at how Patty helped Allison's grief in that moment at the bar first, not Kevin. Similar to helping Allison out of the dug grave in the cemetery, Patty helped her get out of the hole of grief for a brief moment. Allison may have then gotten into Kevin's grasp, but Patty could have also warned her ahead of time. It's something very evident in how Patty behaves in parts of this episode, and that's that she is grieving the choices she should have made that day and what she could have said.

This episode of Kevin Can F**k Himself was a beautiful punch to the gut when it came to characters we've come to care so much for, such as Allison and Patty. Allison's mother ended up signaling the sitcom world, and her words "college is for ham people" was the first true hit against her daughter. While it momentarily lacked some focus when it came to Tammy's involvement, it made up for it in almost every other scene mixing comedy & drama so well together. 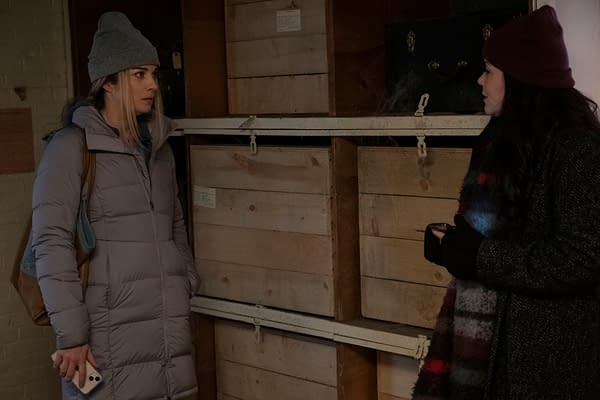 Review by Brittney Bender
9/10
AMC's Kevin Can F**k Himself, S02E03 "Ghost," was a beautiful punch to the gut as it mixed the impact of Allison's complex grief with Patty's own reflection on past decisions. The episode stopped short in some moments, but it quickly picked itself back up and gave an emotional plea from the heart of Allison's character.
Credits
Network
AMC