In the history of pop culture, there have been some famous and infamous questions that we – as a nation – have been forced to confront and address. From the foundational existential dilemma faced by William Shakespeare's "hipster patient zero" Hamlet in his "To Be or Not To Be" soliloquy all the way to "Who Shot J.R.?" and that thing about the dress looking two colors, we find ourselves forced to makes decisions that tear at our very hearts… our very minds – and dare I say… our very souls.

Today, the fine folks at HBO's Sesame Street put our society back in that uncomfortable position once again. With a tweet one can only hope was sent in good faith and with no understanding of how it would pit brother against brother… sister against sister… neighbor against neighbor… the fine folks at the Sesame Workshop posed a question mankind wasn't prepared to answer:

You're stuck on a deserted island and you can pick one of these Sesame Street friends to come with you. Who are you picking and why?

So what will it be, people? #TeamOscar? #TeamGrover? #TeamElmo? #TeamCookieMonster? I'm not sure what might happen to the losers, so that has me slightly concerned – and while I'm not interested in swaying your vote… I'm not sure the cookie dude's a good choice if food's limited. It's a short road from "cookies" to human flesh when things get tough… and things get rough for CM when he's low on "The Dough":

Here's a look at the original tweet from Sesame Street:

You're stuck on a deserted island and you can pick one of these Sesame Street friends to come with you. Who are you picking and why? 🤔 pic.twitter.com/bGjF7Bx5Xo

When the times comes for you to take a break from knife-fighting over your decision with friends and family, here's a little Sesame Street-themed flashback from that not too long ago. Bert and Ernie threw down a challenge to Will Smith and Jeffrey "DJ Jazzy Jeff" Townes: pop culture isn't big enough for two squads of '90s neon-clad, high-fivin' TV rappers, gentlemen. So pick up your banana and take their call: they're coming for your throne — and make no mistake… 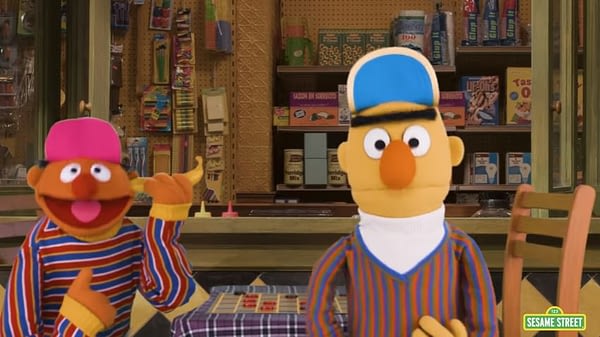 Most likely done in response to adults who spend way too much time projecting their own interpretations, insecurities, and issues onto two Muppets whose only "ulterior motive" is to make your kids into better human beings, Sesame Street  treated us to their unique take on popular theme song to '90s NBC sitcom The Fresh Prince of Bel Air as the felt friends drop the mic on the real backstory on how they first met up:

Showed him my paperclips, / He thought they were great / Introduced him to Rubber Duckie as our new roommate / One half of a whole, / One part of a pair / That's the story of how we became, / Ernie and Bert – / Put it there!

For those of you who need a cheat sheet, here's a little reminder of Smith and Townes' pop culture classic — now good luck getting this little 1992 earworm out of your head for the rest of the week.

Now this is a story all about how
My life got flipped turned upside down
And I'd like to take a minute, just sit right there
I'll tell you how I became the prince of a town called Bel-Air

In West Philadelphia born and raised
On the playground is where I spent most of my days
Chilling out, maxing, relaxing all cool
And all shooting some b-ball outside of the school
When a couple of guys who were up to no good
Started making trouble in my neighborhood
I got in one little fight and my mom got scared
And said "You're moving with your auntie and uncle in Bel-Air" 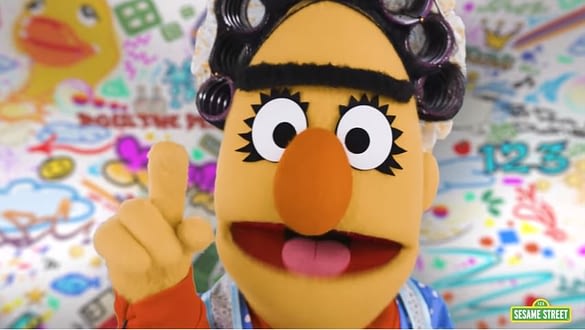 I begged and pleaded with her day after day
But she packed my suitcase and sent me on my way
She gave me a kiss and then she gave me my ticket
I put my Walkman on and said "I might as well kick it"
First class, yo, this is bad
Drinking orange juice out of a champagne glass
Is this what the people of Bel-Air living like?
Hmmm, this might be all right
But wait, I hear they're prissy, bourgeois, and all that
Is this the type of place that they should sent this cool cat?
I don't think so, I'll see when I get there
I hope they're prepared for the Prince of Bel-Air

Well, uh, the plane landed and when I came out
There was a dude looked like a cop standing there with my name out
I ain't trying to get arrested yet, I just got here
I sprang with the quickness like lightning, disappeared
I whistled for a cab and when it came near
The license plate said 'Fresh' and it had dice in the mirror
If anything I could say that this cab was rare
But I thought "Nah, forget it, yo holmes, to Bel-Air!"

I pulled up to a house about seven or eight
And I yelled to the cabbie "Yo holmes, smell ya later"
Looked at my kingdom, I was finally there
To sit on my throne as the Prince of Bel-Air