At the conclusion of last week's SmackDown on FOX, Undisputed WWE Universal Champion Roman Reigns gave his cousins, the SmackDown Tag Team Champions The Usos their mission: to face the Raw Tag Team Champions Randy Orton & Riddle and unify the Tag Team titles, just as he did at WrestleMania with the WWE and Universal titles.  The Usos appeared on Raw this past Monday night and laid down the challenge and now RK-Bro has come to the blue brand to respond.  When will we see the Tag Team title unification match?  Let's find out.

We kick things off this week with RK-Bro heading out to the ring and they make it clear they're none too pleased with The Usos' actions this past Monday and they don't have to wait long for a response.  The SmackDown Tag Champs head out and demand an answer to their challenge for a title versus title match and after some impassioned back and forth, the Raw Tag Champs accept.

Next, Orton & Riddle confront Adam Pierce and want to know when the match will be, but Pierce tells them they have to wait to find out.  He does set up a singles match between Riddle and Jimmy Uso for tonight though.

An alright match here with some good spots and back and forth action.  Ripley eventually puts Naomi away with The Riptide for the pinfall.

We next get a backstage interview with Happy Corbin, who insults his former partner Madcap Moss and says he cost him his match at WrestleMania.  We then go to Drew Gulak interviewing Moss himself, where Moss laughs at Corbin and lobs some insults back at him, before doing a whole bit about Los Lotharios kissing his ass, complete with the Kiss Cam focused on the ass in question.

A quick and uneventful one here.  Moss puts Humberto away after a couple of minutes with The Punchline for the pinfall.

We now go back to Pierce's office, where he's confronted by SmackDown Women's Champion Charlotte Flair, who wants to know who approved Ronda Rousey's "I Quit" Match demand last week?  She's interrupted by Gulak, who asks Pierce how his interview went, which pisses off Flair and she demands Gulak meet her in the ring for an "interview".

Don't be nervous, @DrewGulak. You got this.@MsCharlotteWWE wants an interview in the middle of the ring on #SmackDown! pic.twitter.com/VAIr5bvphR

We next learn that the Tag Team Championship Unification match will happen in three weeks at WrestleMania Backlash.

Gulak is in the ring now for an interview with Flair and things don't go too well for him, as the SmackDown Women's Champion winds up insulting the hell out of him before taking him down and locking him in the Figure-8 and making him say "I Quit!"

We next get a video promo from Ludvig Kaiser and Gunther, hyping him up as someone that everyone on the roster should be worried about.

Zayn heads to the ring cutting a whiney promo demanding respect before McIntyre has to chase him around ringside for a bit.  They wind up back in the ring and when McIntyre goes for The Claymore, Zayn again runs away through the crowd and gets counted out.

We find Zayn running backstage until he's confronted by Adam Pierce, who informs him that he will be facing McIntyre again next week in a Lumberjack Match.

This match is a quick pile of nothing, as Ricochet easily puts Mahal away with a Shooting Star Press for the pinfall to retain.  Mahal was WWE Champion for 170 days a few years ago.  I need everyone to remember that.

We now go to a backstage interview with Sheamus, Ridge Holland, and Butch, where they defend Butch's action from last week and make it clear their sights are on The New Day.  Butch then wanders off in a rage, which worries the other two.  This leads to Butch attacking Kofi Kingston and Xavier Woods while they're signing autographs.  His partners follow and a donnybrook breaks out before referees separate them all.

We next go to another video package of Lacey Evans telling her life story, this time detailing the abuse she and her family suffered at the hands of her father.  I don't know what the hell WWE is thinking with this.  If this is all true, then of course I'm sorry to hear about her hard life, but for a company that brags about "putting smiles on faces", this is all way too heavy and a total bring down.  I get they're trying to make her an empathetic babyface now, but this just seems like a lot.

We then see Natalya and Shayna Baszler watching this on TV backstage and mocking Evans.  As she's complaining about everything, she refers to herself and Baszler as "legends" and I burst out laughing like I'm watching Kurt Angle singing "Sexy Kurt".  Anyway, a very smiley Raquel Rodriguez takes issue with this and they have an awkward moment without any payoff.

The match is fine, but I have to note a bit of stupid commentary by Michael Cole, who says that Randy Orton had always done things alone his whole career, which of course completely ignores Evolution, Rated RKO, Legacy, The Authority, and The Wyatt Family, each being a tag team or faction that Orton has been a part of in his WWE career.  Anyways…

Riddle eventually puts this one away with an RKO out of nowhere for the pinfall.

And that's that for this week's episode of SmackDown, which was overall better than last week's lousy episode, but still didn't feel very important and it was definitely lacking in star power, as Roman Reigns was totally MIA.  Oh well, it's good to be the king. 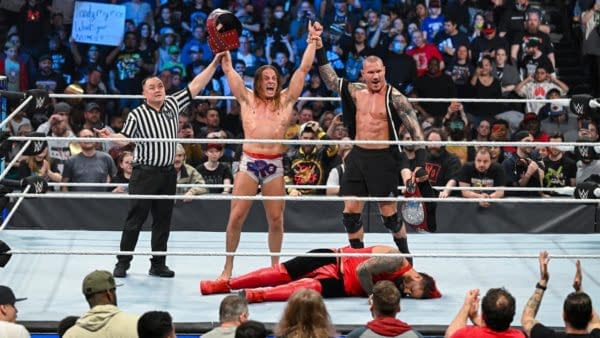 Review by Ryan Fassett
3.5/10
The show was mostly wrestling, so that's good, but the matches weren't anything memorable and the lack of Roman Reigns and others made this episode feel kind of useless.