The Falcon and the Winter Soldier episode three continues the long-standing comic book tradition of making Sharon Carter (Emily VanCamp) an infinitely more interesting character when she isn't around Steve Rogers. We're three episodes in, and the pacing of this show is beginning to feel a little bit off. There is a lot going on, but the pacing is beginning to feel more like a Netflix show where the middle episodes are going to drag a little, which is a shame. This show is trying to do really interesting things with the various characters, including bringing new dimensions to villains and heroes alike.

However, the point of all of this and where we are going remains murky and not in the best way. There is a problem with establishing villains with sympathetic aims, and that it's hard to root for anyone. At the moment, Sam (Anthony Mackie) and Bucky (Sebastian Stan) are our protagonists, but they are going against people who are just trying to bring supplies to disenfranchised people. This is the episode where a more defined villain waits in the margins, and the Flag Smashers go in a new direction as well. So perhaps things are becoming more defined across the board.

There are two big returns in this episode of The Falcon and the Winter Soldier, actually three, but the last one is a spoiler that happens quite literally in the last scene, and they both are fascinating from a character angle. The big one is the return of Sharon Carter. Sharon is a character that the Marvel Cinematic Universe just never seemed to get a decent handle on. We haven't seen her for a while, and she was one of the presumed dusted people in the Blip. The Sharon we meet here is a very different character, and much like in the comics, Sharon becomes vastly more interesting when she isn't romantically tied to Steve Rogers in any way. It's good to see her, and she gets one of the most brutal fight scenes that we've seen in this show so far. Her motivations are interesting, and hopefully, this isn't the last time we'll see her.

The other return is that of Baron Zemo (Daniel Brühl). Zemo is often one of the forgotten Marvel villains when, in reality, he's one of the few that actually won. While he was caught and thrown in prison at the end of Captain America: Civil War, he succeeded in his mission of breaking up the Avengers. Sam is very much against Bucky seeing Zemo again, and the dynamic that these three characters generate is fascinating to watch. All three of these men dislike each other to varying degrees, and fortunately, The Falcon and the Winter Soldier knows that it is at its best when the various characters are having snarky conversations with each other. Where Zemo is going as a character and his place in the story is also very up in the air, but it's interesting, to say the least. He plays into the ongoing theme of people seeing Bucky not as a person but as a weapon and a tool which is something that we saw from John Walker (Wyatt Russell) last week as well.

Unfortunately, we don't get a lot with John Walker in this episode, but the little that we do get is showing exactly what kind of person he is and why he should not be carrying that shield. He's going down an interesting road, and, again, he still has not done anything utterly villainous, and that actually works better for the character. So far, no one has been insanely over the top evil in The Falcon and the Winter Soldier, save for one scene that is pretty messed up at the end of this episode and the Power Broker lurking on the edges of the story. The thing that the Flagsmashers do at the end of the episode, however, isn't even presented as something the entire group likes. Instead, it's seen as extreme, which it was. So the show is even hesitant to demonize the entire group.

The Falcon and the Winter Soldier stumbled with this episode. While it was awesome to see Zemo and Sharon Carter again, the pacing is starting to feel a bit off. There wasn't any time for WandaVision to stumble when it came to pacing, and it really didn't, but there is something here that isn't quite working as well as WandaVision did. It truly feels like something we wouldn't have noticed as much if this came out before WandaVision, but that is the world we're living in now. It's not a bad episode by any stretch, but the next episode, they should really pick it up if they hope to stick the landing.

The Falcon and the Winter Soldier E03 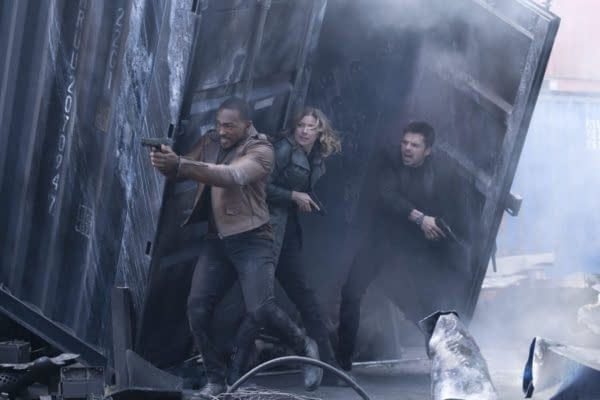 Review by Kaitlyn Booth
8/10
The Falcon and the Winter Soldier stumbled with this episode. While it was awesome to see Zemo and Sharon Carter again, the pacing is starting to feel a bit off. It's not a bad episode by any stretch, but the next episode, they should really pick it up if they hope to stick the landing.

Based on a recent production list, it looks like filming is taking place in April on HBO Max's It/Pennywise prequel series, Welcome to Derry.

Doctor Who 60th Anniversary Trailer: RTD Believes We Missed Something

Russell T. Davies shared some interesting insights into the Doctor Who 60th-anniversary trailer, teasing who it is we should be asking about.

In what feels like a very surprising move, Hulu confirmed that the adult-animated series Hit-Monkey will be returning for a second season.

Tony Khan is depicted as a virile warrior charging to the ring to take on WWE on the international cover to Business Week's latest issue.