Hey gang!  So on top of a number of NXT stars, I was also drafted to SmackDown and will now be doing the recaps for the blue brand in addition to NXT 2.0.  So if you hated my opinions before, now you have double to worry about, you lucky duck!  Now as for the actual show itself, WWE says we're in for a new era tonight as they not only handle the fallout of Crown Jewel but also welcome a new roster of superstars to Friday nights on Fox.  Enough out of me, let's see how things look in the new era of SmackDown on Fox!

We kick things off with "The Tribal Chief" and more importantly, the man who is still the Universal Champion, Roman Reigns as he makes his way to the ring with Paul Heyman. Reigns shows he's still feeling paranoid, as he questions whether Heyman is holding the belt for him or for Brock Lesnar?  He then moves on to calling himself "the best of the best" and almost breaks his arm patting himself on the back.

He goes through the list of all the big names he's beaten since Wrestlemania and then mentions a tweet where Lesnar made a threat towards him.

He calls out Lesnar, who after a long delay and some more trash talk from Reigns, eventually obliges him and storms the ring to start pounding the champ.

They fight at ringside, with Lesnar putting Reigns through the ring steps and then bashing him in the face with them.  As Lesnar preps the announce table for impact, The Usos run in and try to stop him, but Lesnar just clears them out as well. Reigns gets some shots in on Lesnar, but "The Beast" smashes him into the ring post, grabs a camera, and nearly misses Reigns with it.  Refs and officials try to stop him, but he starts beating them all up, which brings out the locker room to surround him and corner him into the ring, where he poses with the Universal belt.

A pretty good open here.  Lesnar is at his most fun when he's an unstoppable monster and this definitely played into that.

Adam Pearce now hits the mic where he condemns Lesnar for the destruction he just caused and suspends him indefinitely (there's your reason he gets to go home for months again).  This brings Lesnar back out from the back and he F-5's Pearce twice (and rips his pants).

We next see that there's mayhem in the back, as Sonya DeVille is on the phone with someone and promising she'll get the show back on track.  She's interrupted by Naomi, who demands a match with DeVille tonight.  DeVille tells her off and then turns around to find Drew McIntyre, who informs her that he's heading out to the ring to issue an open challenge to anyone on the roster.

And he does just that, making his way to the ring to make an immediate name for himself on the blue brand.

Who wants some? ⚔️@DMcIntyreWWE vows to issue an open challenge RIGHT NOW on #SmackDown!

He demands someone head out to get their ass kicked and Sami Zayn takes him up on the offer.

"I'm something of a locker room leader around here." 🙄#SmackDown @SamiZayn @DMcIntyreWWE pic.twitter.com/8wG19b0p4T

And it's an ok one.  Pretty by the numbers here, but Zayn plays the heel well against McIntyre's babyface.  McIntyre hits the Claymore after a few minutes to put Zayn away with a pinfall.

It really has to be said that McIntyre is the true workhorse of the WWE right now.  The dude wrestled a good one against Big E for the WWE title on the other side of the world yesterday, takes a 20-hour flight back to the U.S. for tonight's show, and is one of only three guys from yesterday's card to actually wrestle a match tonight.  This guy should be the face of the company without a doubt.

Kofi Kingston hits the ring now to officially crown his longtime New Day partner Xavier Woods as the new King of the Ring with a coronation ceremony.

Kofi gives Xavier a grand introduction, who then enters sharing lots of love with the fans in attendance.  He gets a big "you deserve it!" chant from the crowd and appears really touched by the reception he's receiving.  Kofi presents him with his royal accouterments and then the two have a funny segment declaring his gospel.

We now head backstage, where current SmackDown Women's Champion Becky Lynch cuts a quick promo hinting that she might not make a fair trade with Charlotte Flair for her Raw Women's Championship later.

Will there be a title exchange tonight… or will #Becky2Belts make a comeback? #SmackDown @BeckyLynchWWE pic.twitter.com/udDoxvDKKK

A rematch for Crown Jewel on SmackDown here.  They work a much quicker match tonight though, with a lot more big moves driving the action.  Ali tries a Sunset Flip from the corner on Mansoor, but Mansoor instead grabs Ali's legs to roll him up for the pinfall.

Former NXT star Ridge Holland cuts a backstage promo now, introducing himself to the SmackDown audience.  He is followed by Aliyah, Angel Garza & Humberto Carillo, and Sheamus, who all do the same.

Take a look at some of the new faces coming to Friday Nights! #SmackDown pic.twitter.com/OlbGadHv4X

It's Hit Row time, as the biggest faction in NXT makes their official SmackDown debut!

It's Hit Row vs a couple of local jobbers here to kick off their SmackDown careers and they don't waste their moment.

Total squash here, with Top Dolla at one point hitting a double bodyslam on both opponents at the same time.  Obviously, it's all Hit Row beginning to end in this one.

We now head backstage, where Kayla Braxton gets an update on Adam Pearce from Sonya DeVille, who says he'll be ok eventually.

Rick Boogs is on the stage, which means it's Shinsuke Nakamura time!  And that also means it's time for Pat McAfee to dance!

Eventually, there are some shenanigans on the outside and Corbin throws Nakamura into the ring steps, which for some reason doesn't draw a disqualification.  He gets him back in the ring and hits the End of Days for the pinfall.

They don't say after that Corbin is the number one contender now or anything, so what was the point of all that?  Who knows?

Next, we go to a backstage promo from Charlotte Flair, where she answers Becky Lynch's from earlier with condescending insults.

It's title swap time now, where Flair and Lynch will swap their respective Raw and SmackDown Women's titles due to each being drafted by the other brand in what we can only assume was a major oversight by the creative team and now they're trying to make sense of it the best they can without daring to have either of these women go a day without a belt on them.  Can you imagine the horror?!

Sonya DeVille is out here to moderate the whole thing and everyone has mics and none of this makes any sense.  Like why is this a thing?  What is the thought process here?  What is life?  These are the things WWE programming does to a person!

They argue over the belts and Lynch tries to grab both and a lot of awkward and not entertaining shit happens here.  Flair then challenges Lynch to a winner takes all match tonight, but this brings out Sasha Banks.

Banks and Flair start in on each other and Lynch literally just says "ok this is dumb so I'm out of here".

The other two have some more words and that turns into fists and that's it.  That's the ending.  Woof.

Four matches.  A whopping four matches, three of which probably weren't longer than five minutes each.

I don't know about this new era folks, seems like there won't be a lot of wrestling in it. 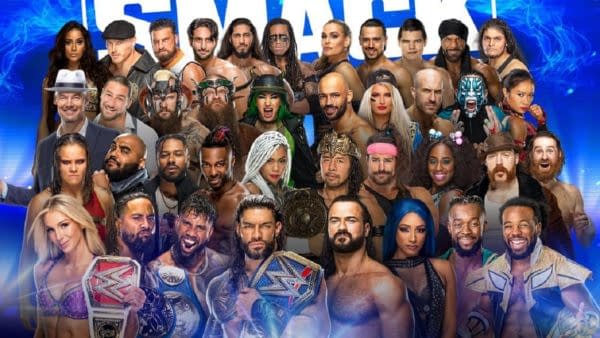 Review by Ryan Fassett
3/10
That was a big nothing burger folks. No good matches. No big developments. A really abundant supply of stupid occurrences. Not good, especially as the beginning of a "new era". The Brock rampage was fun enough and I'll give them some leeway tonight because of the crazy schedule they were on in the past day. But no matter how proud they were of yesterday's show in Saudi Arabia, this was definitely nothing to be proud of.

Our recap of this week's NXT 2.0 on USA, which featured Santos Escobar and Tony D'Angelo battling for bragging rights and control.

Our preview for tonight's NXT 2.0 on the USA Network, where we'll see some tag team matches with In Your House implications.

WWE SmackDown Recap 5/13: Was It A Killer Friday The 13th Episode?

Our recap of this week's WWE SmackDown on FOX, which saw The Usos answer RK-Bro's challenge to unify both of the Tag Team Championships.

WWE SmackDown Preview 5/13: What Will The Bloodline Look To Next?

Our preview for tonight's WWE SmackDown on FOX, where RK-Bro will march in demanding an answer from The Usos to their challenge.

Our recap of this week's episode of NXT 2.0, where Cora Jade faced Natalya and they paid homage to a Stone Cold and Bret Hart classic.

Our preview for tonight's episode of NXT 2.0 on the USA Network, where Cora Jade will take on her childhood idol, Natalya.