Showtime's Yellowjackets gave us a small storm of an episode with "Doomcoming", likely preparing us for the tidal wave that will be the upcoming season one finale. Plenty of noteworthy moments happened in the ninth episode, so major spoilers will be plentiful…you've been warned, buzz buzz.

Shauna, obviously never having addressed her intense PTSD from those months in the woods, not surprisingly goes into panic when confronting Adam about her journals that she believes he took from her safe. The mixture of moments between her thoughts and the situation at hand made for incredible tension-building television. I've come to understand to expect the unexpected with Yellowjackets, but not much prepared me for the knife stabbing Adam. Shauna reverted back to her survival mode, something she knows all too well, and it made sense in a truly bleak way. There's nothing like an immediate flip to intro credits allowing for the shock to set in, thanks so much for that.

We'll be stuck in your head for days 🤘

The #Yellowjackets main title theme "No Return" is now available to stream: https://t.co/m6L0Fa9lrO

When I told my partner (who took a course on history of cannibalism in college) that they began to cook grubs and insects at this point, they weren't surprised and I felt the unease of what may soon come after that source runs out. Jackie suggesting the party, specifically a "Doomcoming" because of the homemade booze is as suspicious as it comes, but a time away from the reality of things made sense. Shit hits the fan back in present day as Shauna and Jeff just straight up reveal away their hidden baggage to one another. Jeff apparently is in debt with some loan sharks, while not cheating I'm never ruling that possibility out with him. Shauna confesses about the murder of Adam (with a side of an affair) to Jeff, but revealing these secrets adds to more chaos. The funniest part had to be when Jeff was shocked "Book Club" wasn't a thing. Oh you poor dumb thing.

Homecoming decorations reminiscent of a depressing DIY crafting show follow the suggestion for a party. While I understand Ben trying his best to make Misty understand important boundaries, part of me wishes he would come out to her, but then again in this setting it's still 1996 and the homophobia is a continued unwanted party guest in society. While closeted Ben isn't able to reveal much, which could help him, Jackie is running a path of straight white teen girl path of destruction towards the camp with her sight set on having sex with Travis. Also no one should allow her to give advice, she knows how weird Misty is now being with Ben and still doesn't use the opportunity to steer her away from it. Misty, for the love of all things, you're underage and Ben is doing right by not accepting advances. Also, even if of age, Ben's preference resides with penis not vagina or the like.

It's fit for a King. #Yellowjackets https://t.co/jKtZoDrwd0

Misty grabbing a binder full of weird plant medical information, along with shrooms wasn't on my Yellowjackets bingo card but here we are. As Yellowjackets prepares for a cottagecore homecoming of nightmares in a 90s montage, my heart breaks with the sweet gesture from Taissa to Van of custom made eye masks, truly an act of service that shows us how Taissa is able to show love in certain ways. Nothing like shrooms in stew either, but not everyone in this camp is a context clues smarty, but apparently Misty was going to just drug Ben so I'm not mad with them being redirected.

I'll admit that seeing them walk into the decorated setting was sweet to see and it was cool seeing a second of these characters making something out of that environment, also got to love the sweet kiss between Taissa and Van in front of everyone. It's really interesting seeing the variety of crowns they were wearing, it gets me wondering if they could signal anything coming for them in the future such as power they hold or roles they end up taking. A Yellowjackets episode featuring a shroom tripping sequence makes absolute sense. The rubbing of Shauna's belly, poor Javi laying down followed by being ditched alone at the doom-coming, Jackie being a love debbie downer, and the hunting of Travis made for a weird couple scenes I won't soon forget. Also, witnessing that specific set of antlers on Lottie's head makes me thing she's the one in the middle, maybe the leader during those winter months. I continue to worry about Misty holding that "journalist" in her basement, we know she's oddly a smart kidnapper but she might get too in her head and slip up.

What's so amazing about Yellowjackets is the ability this show has in showing you the worst parts of these characters but then maintaining how much you end up caring about them afterwards. Angry at Shauna? You can be for her secrets but then you understand why the walls are there around her. It's similar for others too. In terms of theories and ideas, I still believe there is more to Adam that we are yet to see uncovered. It doesn't make sense for him to be so difficult to find online along with no records of him at art school. Now, I'm unsure if he was the one who killed Travis, that honestly may be a survivor we don't yet know about. What I do find hilarious is the way this group works in finding their solutions present day, especially with Natalie asking Misty how to get rid of a body. I just know they've done deplorable things and practiced questionable acts, but I find myself rooting for these women in their survival stories and present day struggles. I might not have gotten every piece of thought in my review, but anything I glossed over I'll be sure to bring up in the preview of the highly-anticipated Yellowjackets finale. Let me know in the comments what you thought and any theories you have! 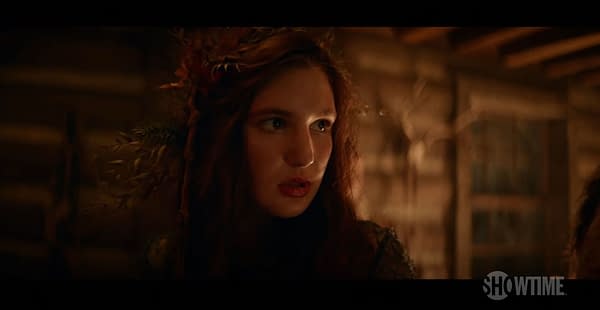 Review by Brittney Bender
10/10
Showtime's Yellowjackets produced a fantastic episode full of memorable moments of survival-level rage from the characters all while moving character development along at a perfect pace. A mix of mind-tripping visuals and phenomenal acting, this Showtime series is heading towards the season finale in the way it should be.
Credits
Network
Showtime