Bad Idea is the new publisher from former Valiant executives set to debut in May. That launch is now on hold a result of the coronavirus pandemic. However, the publisher, headed up by Dinesh Shamdasani, Warren Simons, Hunter Gorinson, Josh Johns, and Atom Freeman will be donating cash to over a hundred planned launch stores. While other publishers like Valiant pause production, Bad Idea keeps going. They told their creators to keep working, and are hiring more. Bleeding Cool understands that includes approaches to Valiant creators who had been told to stop work. They are full of all manner of cheeky ideas, but this may be the cheekiest. In a press release Hunter states:

Control of Bad Idea has been assumed by something that we only know as "The Button." We don't know why it's here or where it came from, only what it wants: one billion clicks, or Bad Idea will never be permitted to publish its first comic.

We tried clicking ourselves, but it wasn't enough. So we've built a website according to The Button's specifications at ServeTheButton.com to bring the effort online.

Once we reach one billion clicks, Bad Idea begins…but if, and only if, enough people mobilize to the cause. Along the way, we've been informed that The Button will be issuing commands and challenges, and revealing its many enigmas and mysteries, daily on Bad Idea's social media channels.

We don't know what the Button has planned exactly, but we're sure it'll be pretty impressive if its current track record is any indication.

We'll do our best to answer any questions you might have, even if we don't have all the answers ourselves.

In the meantime…spare a click for your old pal? You'll find it becomes almost something almost approaching "pleasant" after the first several hundred. 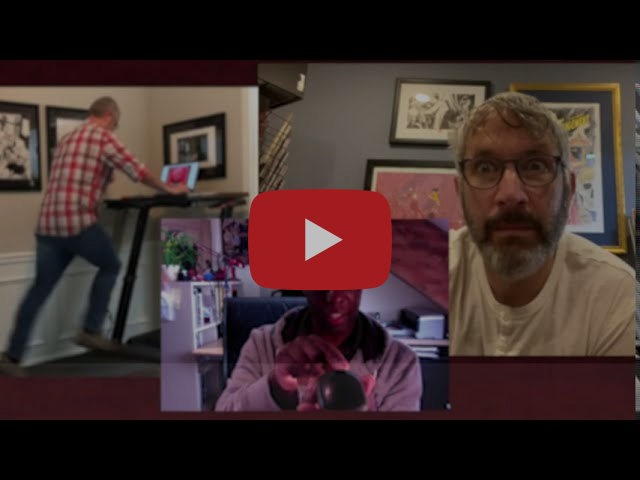 – WE HAVE BEEN SELECTED –

If you're reading this, you've probably heard of Bad Idea — the unruly and experimental comic book publisher that was just weeks away from releasing its first title earlier this year until…we were contacted by something we can neither rationally explain nor fully understand.

It calls itself "The Button."

For months, fans have been clamoring to know when Bad Idea will release its first comic. The answer is simple: We can't…because, seemingly overnight, The Button has assumed control of every facet of Bad Idea — commandeering everything from our publishing plan to our generous suite of employee perks. ("Ping-Pong Fridays," RIP.) But, most startlingly of all, it will not let Bad Idea begin its launch until it has collected what it wants — what it demands — from all of us:

At first, we started clicking ourselves. Then, our families, our neighbors, our pool boys, our paleo culinary consultants. Then, our writers, our artists, and on and on and on. But it wasn't enough.

Yes, friends — its magnitude The Button demands to be clicked, and it knows to whom it must now extend its burdensome grace: YOU. It has seen you. It has judged you. And it still likes you anyway.

To achieve its purpose, The Button has guided our hands in shaping ServeTheButton.com — something new that we're calling a "website," to coin a phrase (hope it sticks) — where its spectacular totality will receive your clicks, every second of every hour of every day, until it has sated its inestimable void. It also is a lot of fun to play with and looks pretty cool, if we're being honest about it:

So, starting this second, here's what you need to do:

1) Don't go home, there is no time. 2) Click it and don't stop, no matter what anyone tells you — especially us. 3) Follow Bad Idea on Facebook, Twitter, and Instagram to hear The Button speak and earn its favor. From time to time, The Button may issue new challenges, demand offerings, or reveal its manyfold enigmas. Make sure you are listening when it does. 4) Accept it.The Button is running the show now, and there's no going back, jack. Steel yourself for the months of The Button's domination that yet await.

We can only speculate as to The Button's true origin and motives, and we know neither how nor why it seeks this outcome. All we can say for certain is that we must comply to bring Bad Idea to comic shops as we've all long hoped, dreamed, and aspired…or face the grave consequences of cosmic imbalance.

What is the truer purpose: to push or to be pushed? This is the wisdom The Button yokes from those who attend it. It is the mystery of revelation, the intention of design, the servitude of purpose. Also, America's new favorite pastime. Click it! CLICK IT!

– WHAT HAPPENS NEXT…? –
Not gonna lie, it's probably going to get pretty intense from here on out, so get those game faces on.

We'll say it again: Earn The Button's favor by following Bad Idea on Facebook, Twitter, and Instagram. When The Button speaks, pay tribute to its magnitude, perform its challenges, and receive its gifts — those who do will be richly rewarded.

The Button will issue its first edict today at 12 noon ET/9 am PT. So it has been foretold.

In the meantime, surrender your email address to The Button's will, so you don't miss a single milestone on the march to one billion clicks.

Its magnitude The Button knows all. That means everything. Including that.
Recognize the circle inside yourself. Follow it all the way around. Then around again.
The Button contains multitudes and will also be formally recognized as The One Above All, Magic Mike XXL, and the Owner-Proprietor of Big Cheese LLC, in addition to a number of other quasi-legal, but mostly spiritual, aliases and sobriquets.
Keep telling yourself it's just a button. Trust us, we tried that.
Learn to recognize fellow Attendants of The Button. You may already know one. Perhaps several. They may be closer than you think.
You're kidding yourself if you thought Joker was any good, you fucking nerd.
The Button gets pretty crabby on Mondays, so let's try to keep it upbeat, okay?
Bad idea does not endorse the views of The Button or followers of the Remunerated Sect of Buttonology.
If the Button commands it, you better get on that.

They are currently up to….

Brittany Long Olsen Brings The Happy Shop to Oni in 2024

Brittany Long Olsen Brings The Happy Shop to Oni in 2024