With a host of derivative and uninspired ideas at its core, Batman/Superman #21 manages to follow because it has no idea how to lead. Channeling the early 20th century origins of its title characters into a cross-dimensional bit of frippery, it denies its solicitations (if you come looking for Alanna of Rann or El Diablo to have an impact on this story, you're not gonna be happy) while doing nothing to actually solve the problem this "saga" started.

A cosmic power called Auteur.io (which is supposed to be a tech reference or something) that has trapped the Dark Knight and Man of Tomorrow that we know while forcing action figure sized versions of themselves from what seems like the 1940s to hop continuities and interact … for some reason that doesn't really make sense. Then, because they won't do as he expects, he sends in Etrigan to whack them because, you know, why not? Along the way, there's an attack by Superman robots that somehow is battled effectively by a man in a costume and his less than coherent teenaged ward, a look at a version of the Fortress of Solitude that doesn't do much more than give Ivan Reis, Danny Miki, Sabine Rich, and Saida Temofonte a chance to spend some time making fine details that might pop up as an Easter egg for someone. Then, there's the solution here: punching, which did absolutely nothing effective before, but suddenly gets the job done. Ugh.

It's hard to tell what Gene Luen Yang intended to happen with this script, which is, in turn, baffling and exhausting. The conclusion — which has creates the duties of Marvel's First Race with none of the gravitas or clarity of Jeffrey Wright — smacks of "ooh, I can do that too"-ism with the culture checking Disney+ every Wednesday morning. Everyone here had the tools to make a good comic book … but somehow, it didn't happen. RATING: NO. JUST … NO.

Batman/Superman #21
By Gene Luen Yang, Ivan Reis
The dimension-shattering Archive of Worlds saga ends hereâand reverberations from this titanic tale last long after the dust settles! As the Dark Knight and the Man of Steel work to halt the villainous Auteur.io's plan here on Earth-0, the Batman and Superman of their respective archive worlds must team up with Alanna of Rann and El Diablo himself to save whatâs left of their homes. Etrigan and his demon hordes rain Armageddon down on their pocket universesâand the fate of the World of Tomorrow and the World of the Knight hang in the balance! 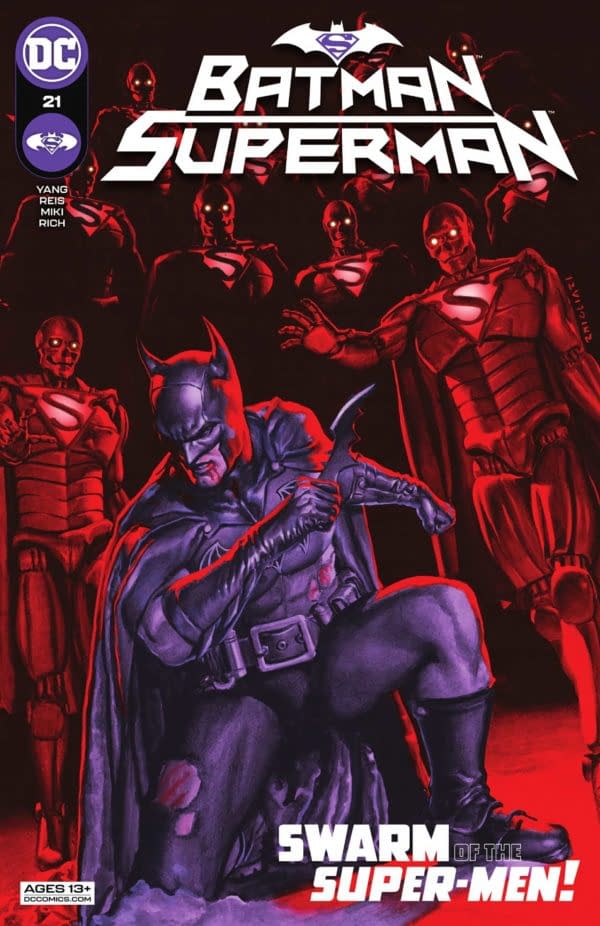 Review by Hannibal Tabu
3/10
This issue is a poor guide through vast new realities. If you follow it, and dare to face the unknown, you won't ponder the question: what if? You’ll wonder why.
Credits
Editors
Ben Abernathy, Paul Kamiski, Ben Meares

Archie Takes Over with Pep Comics #41, Up for Auction

Pep Comics #41 is a noteworthy moment for Archie because it marks the real beginning of his takeover of the Pep Comics title's covers.

ABLAZE Publishing's new collection of the classic newspaper strip Friday Foster: The Sunday Strips, by Jim Lawrence and Jorge Longarón, has been nominated