Oh had you forgotten all about 5G? Well, maybe in the light of the coronavirus pandemic, DC Comics has as well. But plenty of plans were already in place and have been moving forward. Including it seems, today's Legion Of Super-Heroes #5 by Brian Bendis and Ryan Sook. Now, those keen readers of Bleeding Cool's coverage of 5G and the then-planned new DC Timeline, will remember that this included the likes of Bruce Wayne being replaced as Batman by Luke Foz, Barry Allen being replaced as The Flash by Captain Boomerang's kid and Clark Kent being replaced as Superman by… Jonathan Kent. Who, in the Legion Of Super-Heroes is off in the future of the 31st century on a gap thousand-year. Of course that is a perspective where one can look back on the current timeline…

Such as the Justice League being remembered from the Grant Morrison/Howard Porter JLA era when Superman had a mullet, Aquaman had a harpoon for a hand and the Green Lantern was Kyle Rayner. But they also recall a Teen Titans from even earlier…

…straight from the Marv Wolfman/George Perez era. But what about the current era of DC? Well apparently it's ll up in the air, and that's not just down to DC's printer closing or Diamond shutting up shop.

With Brainiac 5, Querl Dox, seeing their own era as rather unstable, and totally reliant on what was going on a thousand years before.

Things do disappear. Because this Legion Of Super-Heroes relied entirely on what happened in Doomsday Clock. Where Dr Manhattan took the Legion in and out of existence by moving a Green Lantern in and out of reach of Alan Scott. 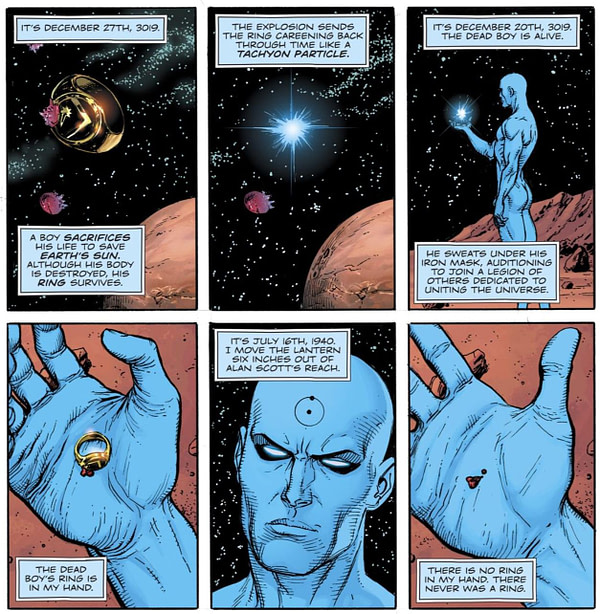 And with Superman seen as vitally important to the DC Universe, then and in the 31st century too. With that version of Saturn Girl telling Adrian Veidt what she knows. 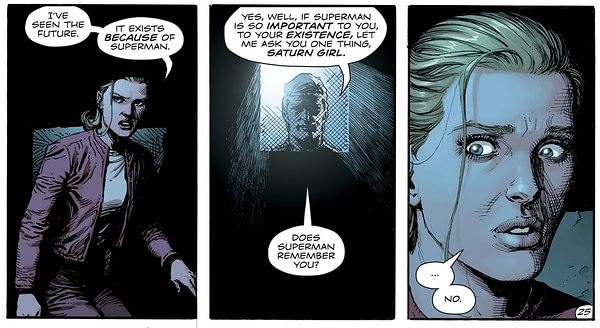 Because, yes, things to disappear. Like that version of Saturn Girl. 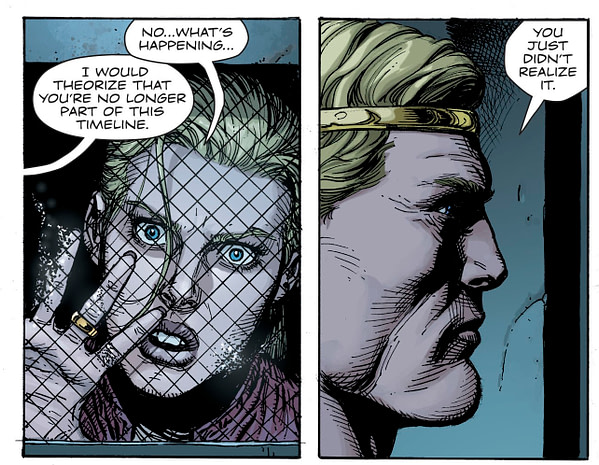 It is this that Brainiac is referring to. As well as how the DC Earth has been rebooted and relaunched, from one Crisis to the next…

'Like those poor Watchmen' – very good, Brian, very good, translated, interpreted, misinterpreted… and fictional? And Superman as the only one who can save the timeline. But… which Superman?

Jonathan Kent, destined to be Superman, and trained into that role by the Legion Of Super-Heroes – and that being the very reason and justification for their existence. As in, they won't exist, if Superman doesn't. This Superman.

No pressure, Jonathan… but Doomsday Clock did show us that 5G is coming. Or rather, it was coming.

And a nice big Crisis as well – and Bendis' involvement with a Crisis 2020 has been heavily rumoured. Does this start here as well? With Superman constantly being relaunched and rebooted for that thousand-year gap…

…and Braniac 5 does seem to have a legacy to uphold. 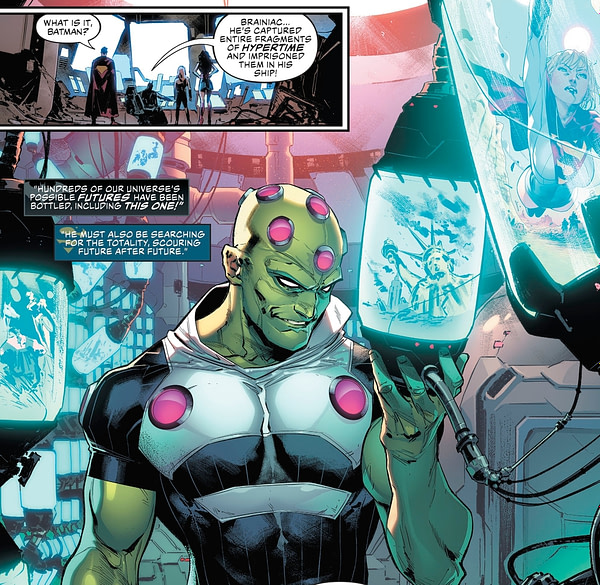 See, Synder wants in too. So 5G, Generation Five, Crisis 2020, it starts here. But will it go any further now?

LEGION OF SUPER HEROES #5
(W) Brian Michael Bendis (A/CA) Ryan Sook, Travis Moore
DC's far-flung future is happening right now! With the secret of Jon Kent revealed, the Legion of Super-Heroes is united to save New Earth from those who would destroy it. Will Aquaman's lost trident be the key to New Earth's demise? Plus, Mon-El comes clean about his connection to Jon, and Cosmic Boy and Ferro Lad find out they both have a crush on the same Legionnaire.
In Shops: Mar 25, 2020
SRP: $3.99

New York Comic Con - NYCC -  isn't quite the insanely massive party convention that San Diego Comic-Con was. But sure, there are plenty of things

Bleeding Cool got the scoop that the week before New York Comic Con, Editor-In-Chief of the comic book publisher AfterShock Comics, Mark Marts, is leaving

AXE: Judgement Day is playing out in comic stores right now. Dark Web is following. And in 2023 another X-Men event is coming. Previously teased as S.O.S,

PrintWatch: We are getting a third printing of Miss Meow #1, and second printings of Midnight Suns #1, End After End #1, Briar #1, Mighty Morphin Power

Marvel Comics has revealed solicitations for Captain America releases in January 2023, as part of the Cold War event. And promised more details to be