Today, DC has tipped the table. Shazam! #7 is still coming out on September 25th. And Shazam! #8 for October 9th.

But retailers have been told that all orders for Shazam! #9, #10 and #11 have been cancelled. They will be resolicited at a later date, but the earliest that could be for Shazam! #9 would be December. And no guarantees for that. 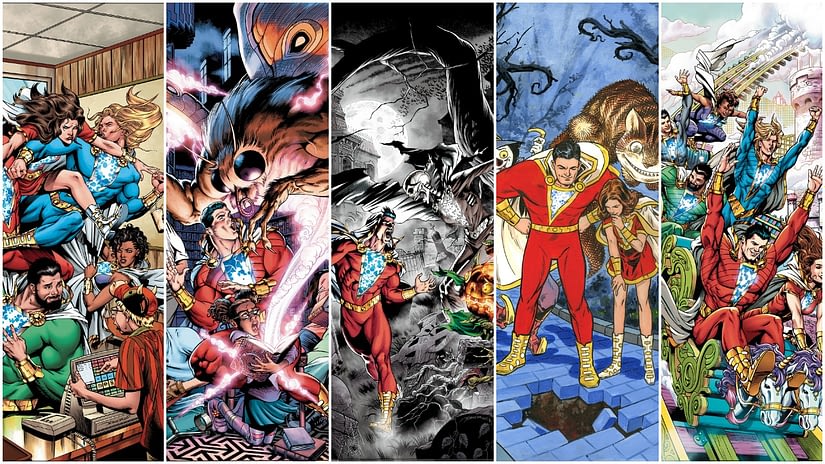 SHAZAM #7
(W) Geoff Johns (A/CA) Dale Eaglesham
"Shazam and the Seven Magiclands" continues as the shocking new member of the Shazam family is revealed! This mystery person will send shock waves through the entire cast! SRP: $3.99

SHAZAM #8
(W) Geoff Johns (A/CA) Dale Eaglesham
As Billy Batson and the rest of the Shazam Family are about to learn as they cross over into the Darklands, the Magiclands aren't all fun and games! In a world filled with all kinds of frightful creatures and haunts, nothing will compare to the horrors of Billy's own internalized fears.  SRP: $3.99

SHAZAM #9
(W) Geoff Johns (A) Dale Eaglesham (CA) Mark Buckingham
After their terrifying adventure through the Darklands, Billy and the rest of the Shazam family find themselves going over the rainbow and through the looking glass into the upside-down, topsy-turvy world of the Wozenderlands! It's a magical, multicolored metropolis where it's always time for a cup of tea, a game of croquet or even a stroll down the Blue Brick Road-but it's also ruled by the mysterious Wizard of Wozenderland, desperate for the power of the six champions! SRP: $3.99

SHAZAM #10
(W) Geoff Johns (A) Marco Santucci (A/CA) Dale Eaglesham
The magical superhero adventure continues as the seventh member of the Shazam Family is finally chosen-and it will change Billy Batson and his brothers and sisters forever! But can this new family come together to stop the deadly all-new Monster Society? Plus, Mary's pet rabbit, Hoppy, makes a startling discovery… SRP: $3.99

SHAZAM #11
(W) Geoff Johns (A) Marco Santucci (A/CA) Dale Eaglesham
Billy and his family have seen so many marvelous things in their journey through the Magiclands, while facing tough opponents and even tougher questions about family, loyalty and integrity. And they are about to face the greatest opponent of them all! Will they have the wherewithal to succeed? Find out in the penultimate chapter of "Shazam! and the Seven Magic Lands"! SRP: $3.99

Something Is Killing The Children and Blue Flame Top Advance Reorders

Greetings from the coal face of the direct comics market. Where retailers try to increase their advance reorders of certain comics ahead of sale. Where

Everything Is Meta – A Blatant & Wholly Transparent Appeal To You

With the Loki TV show about to drop on Disney+, Marvel has been pumping out a number of Loki graphic novels, might that reveal Lady Loki?

The Strangely Scientific Debut of Adam Strange Up for Auction

The debut of Adam Strange in Showcase #17 from DC Comics in 1958 came just as the space race was heating up.

Wonderbound, the Middle Grade and Young Adult imprint of Vault Comics, has announced HELLO MY NAME IS POOP, a new middle-grade graphic novel written by

The Future in the Hands of Red Hood? Future State Gotham #1 Preview

America Chavez: Made In The USA #3 Review: Disappointing

America Chavez has been astonished by her otherworldly origins, her overwhelming power, her brusque manner, and her striking style. What if, however,

In this preview of Wonder Woman #772, the titular Wonder Woman comes up against her greatest challenge ever: snake flatulence.