Bleeding Cool reported on DC Comics' plans to repackage old Steve Ditko comic books with The Question and Blue Beetle as 'The Road To Watchmen', noting their inspirations behind characters Rorschach and Nite Owl. This is what was planned for their first title. 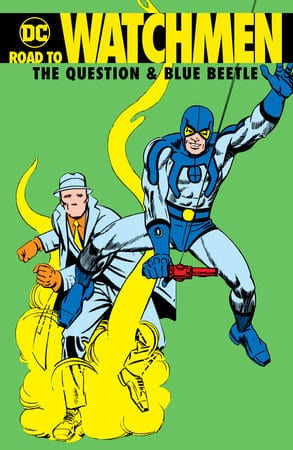 With a new HBO Watchmen series coming soon, DC collects some of the best stories starring the heroes that inspired the cast of the original WATCHMEN comic series.

At the height of comics' 1960s Silver Age, artist Steve Ditko was winning praise for his spectacular work on Marvel's Amazing Spider-Man and Dr. Strange. At the same time, Ditko was also creating powerful tales of other heroes: Charlton Comics' Blue Beetle, Captain Atom and the Question. Now, for the first time, DC collects stories starring these enigmatic heroes, plus the Peacemaker and others — the heroes that provided the inspiration for WATCHMEN team members Night Owl, Doctor Manhattan, Rorschach, the Comedian and more. This title includes CAPTAIN ATOM (1966) #83-86, BLUE BEETLE (1967) #1-6, MYSTERIOUS SUSPENSE #1, CHARLTON PREMIERE #3, THE CHARLTON BULLSEYE (1975) #1, #5, THE CHARLTON BULLSEYE (1981) #1, AMERICOMICS #3 and AMERICOMICS SPECIAL #1.

However, it appears that the listing has been removed from Edelweiss' catalogue and the Amazon listing has kicked it into 2080, usually referred to as being sent to the cornfield. We won't be seeing it's like…