Bleeding Cool reported earlier that despite the shutdown of the comic book industry, we somehow managed to find ourselves with new comics. Specifically, copies of Batman #92 and #93 from DC. Alongside Empyre: Fantastic Four #0 and Empyre: Avengers #0 from Marvel. Comics. Bleeding Cool has been able to confirm, that and they are all, every issue, marvelous. At Bleeding Cool, we have a tendency to like superhero comics, and the combination of Dan Slott and Al Ewing, Pepe Larraz and RB Silva, James Tynion IV and Guillem March has helped distract us from the current calamity but that's not all. As well as the Empyre #0, both of them, we also have Empyre #1, originally due for publication in a couple of weeks, with Slott, Ewing, and Schiti on equal form. Though currently, that schedule is all up in the air. We're not going to share any big spoilers, more of a flavour of what you can expect, but if you want to go in spoiler-free please stop now.

So again, reigning back on the spoilers but taking a little look for flavour and an indication of where Empyre is going and why. Incoming showed us a combined Kree and Skrull empire under the command of Hulking, and an Earth in which Skrull and Kree partners had been killed by a tree.

The Road To Empyre

It played out the origins of the Kree and Skrull war, as well as their relationship with the sentient plant race the Cotati, the history of the Celestial Messiah, and the presence of Skrulls and Kree on Earth

It took us to the Blue Moon where the war first began and where the Empire, where the Celestial Messiah is now and where the combined fleet of Kree ad Skrull are heading.

It introduces the Profiteer and shows the effect on the galactic economy without a Skrull/Kree war fueling it, and sees the Fantastic Four get a lift to the big battle. While picking up Skrull and Kree kids, forced to battle for those missing the War and now mirroring the Skrull and Kree solo fights that since were used to replace a full active war- and that led to the events in Incoming. 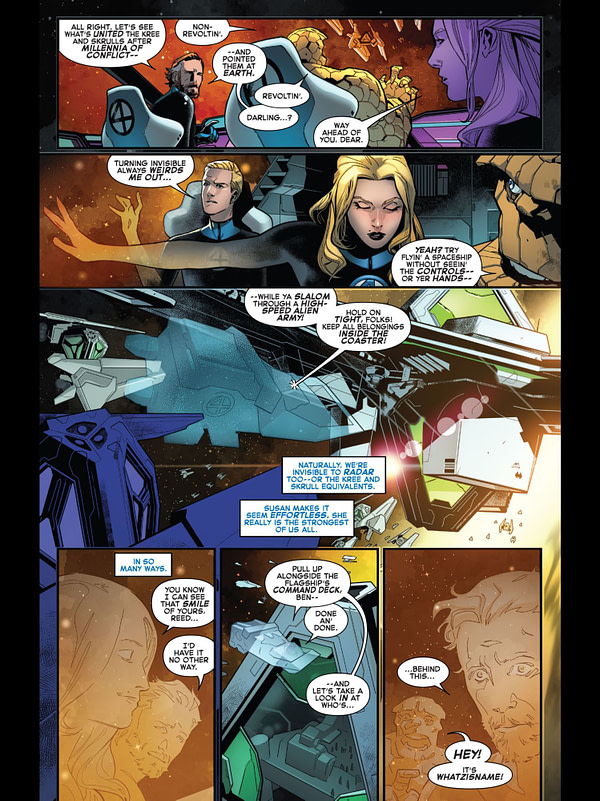 It starts off right in the thick of the armada, trying to work out a) what's going on b) what Hulking is doing there and c) discovering that the powers of the Super Skrull, tied to their own, is rather inconvenient. 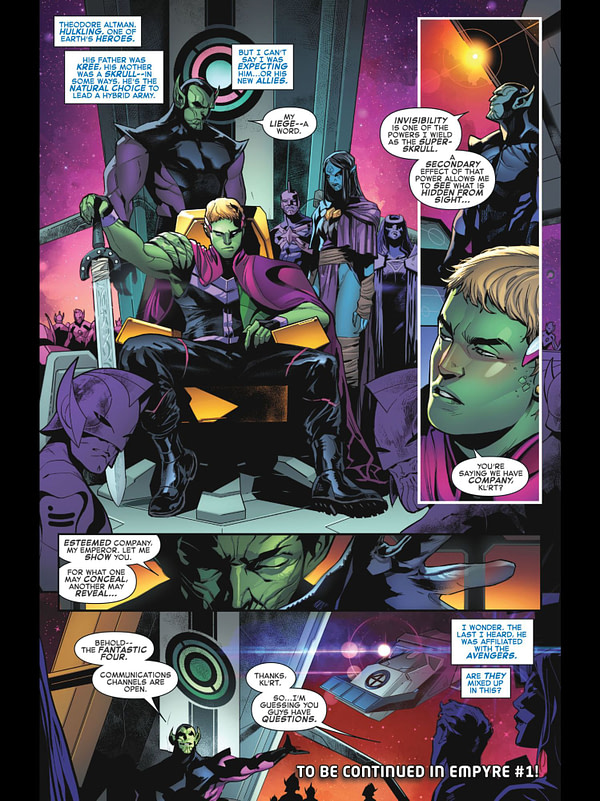 While the Avengers wait on the moon alongside the Celestial Messiah and the Cotati for the Kree and Skrull to turn up and wipe them out. She-Hulk gets a bit of a mental transformation courtesy of the Cotati. Such a peaceful race, so misunderstood, so poorly treated, hang on, hang on, is everyone forgetting how Incoming #1 ended? Beware the trees, indeed.

While the diplomats go to work trying to talk fast enough, cleverly enough, to prevent a war that seems to be steaming ahead, with what it represents far more important than any gains that might be gained. Not so much boots on the ground as it is the hearts and minds of those at home. With the presumptions and assumptions of all the superheroes, fitting the good fight, on the side they know to be right. Tony Stark even talks about having the opportunity to have a simple fight at long last. The good versus the bad, defending the bullied against the bully. All the time while the Avengers and the Fantastic Four, alongside the Swordsman, get the sudden realisation that may have been wrong all this time. Still, at least the Ghost Rider gets a brand new vehicle out of it all, and a potential new toy for Christmas. And we do get a reason as to why Empyre is spelled with a Y, just to keep Jude happy. However, there is a battle, conflict, twists and turns, and one glorious moment with Mjolnir that Thor fans will treasure. So, who's up for the fight?

EMPYRE #1 (OF 6)
(W) Al Ewing, Dan Slott (A) Valerio Schiti (CA) Jim Cheung
• The Kree and the Skrulls have united under a new emperor – and their war fleet is on a collision course for our world.
•  On the moon, the Avengers are ready to strike with the full power of Earth's Mightiest Heroes. Approaching from outer space, the Fantastic Four are seeking a diplomatic solution.
•  If the two teams can't work together to save the day, things can only get worse…
Rated T+In Shops: Apr 15, 2020 SRP: $5.99

Two weeks ago, Bleeding Cool reported that that week's DC Comics ads for Infinite Frontier had questions to ask. We did the same last weekend as well. And

Recently, Bleeding Cool reported more changes to the distribution of comic books to the direct market of comic book stores, as DC Comics and Marvel have

Acme Novelty Library is one of the most important comic books published in the last 25 years. Steeped in the past, reflecting cartoons and designs of the

Two weeks ago, Bleeding Cool reported that that week's DC Comics ads for Infinite Frontier had questions to ask. We did the same last weekend as well. And

The Notorious Eddie Bentz in Gangsters Can't Win, Up for Auction

Eddie Bentz pulled off some of the most legendary bank robberies in American history and some of the proceeds to fund his collecting habits.

The Justice League Gets Political in Action Comics #1033 [Preview]

Amanda Waller sparks an international incident in this preview of Action Comics #1033, and the Justice League is caught in the middle.

Recently, Bleeding Cool reported more changes to the distribution of comic books to the direct market of comic book stores, as DC Comics and Marvel have

Acme Novelty Library is one of the most important comic books published in the last 25 years. Steeped in the past, reflecting cartoons and designs of the