Entropy #1 asks the question, what if the Silver Surfer served an evil god? You'd get something like Entropy, the new limited series from Heavy Metal. In the comic, family man Henry Hanks is chosen and then killed by Kako, the living embodiment of chaos and misery, as the solicit puts it, to become Kano's herald. Legendary writer, Christopher Priest's main influence on the series, appears to be Jack Kirby's space bibliography, and Entropy #1 contains a couple of smart, respectful updates to the canon.

Maybe that should be the lede? Someone, presumably editor Joseph Illidge, said yes to Priest obeying and enjoying the influence of Jack Kirby?

Artist Montos' work is new to me, and Montos' strengths appear to be in the spacefaring sections of Entropy #1. The pre-rebirth scene reads a little uncanny valley to me; maybe that's by design? A visual hint that all's not right with what's in front of the reader? Priest has some fun with foreshadowing, too, whether it's the dog that recognizes the threat of Kako before Henry does or that Henry refers to his partner as his master.

Heavy Metal refers to Entropy as an event series, which might be what a publisher has to say these days. In plain language, Entropy #1 is a good cosmic comic that doesn't require knowledge of a gigantic universe to read or enjoy.

Heavy Metal's event series Entropy arrives from Black Panther and Justice League writer Christopher Priest and rising star artist Montos with covers by Bjorn Barends (King Spawn)! Breaking Bad meets Green Lantern in the origin story of Heavy Metal's ultimate supervillain! Henry Hanks had a good life, until he betrayed KAKO, the living embodiment of chaos and misery! With his whole world destroyed, Henry is killed and reborn as the newest herald of Kako, with the power to destroy entire worlds in his master's name. All issues of Entropy will have a special Breaking Bad homage incentive cover by special artist Antonio Fuso! 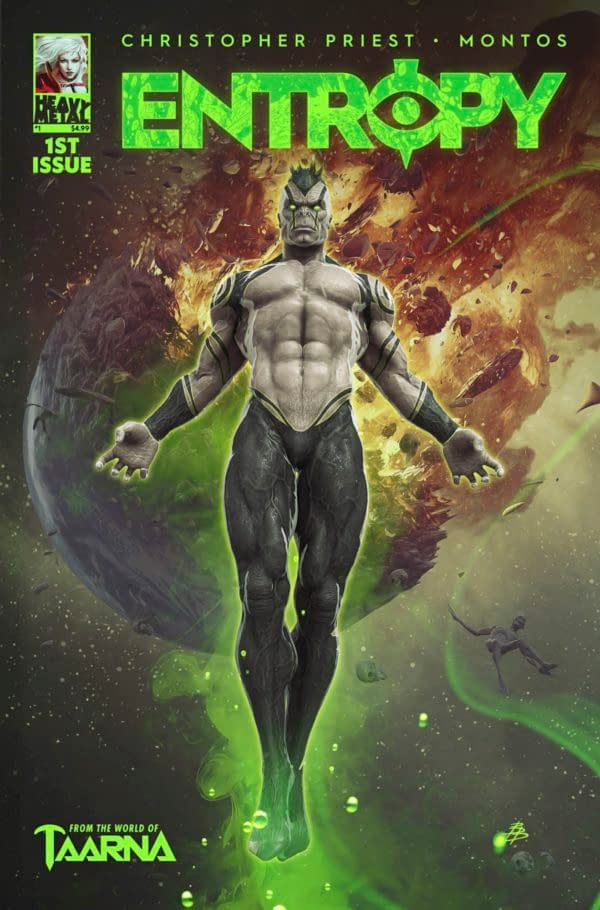