The struggle to be accepted by American society is one many marginalized communities have wrestled with throughout the country's history. In The Good Asian #5, police detective Edison Hark has that burden and balancing not being Asian enough for his own community, all while investigating mysteries and murders.

Through a series of flashbacks, this Pornsak Pichetshote script displays how that cultural wrestling match played out through multiple periods of Hark's life, and he tried to carve out a little joy here and there through drawing or a clandestine tryst that the world would frown upon. The artwork from Alexandre Tefenkgi, Lee Loughridge, and Jeff Powell establishes the stratified environments of this period piece with clean lines, unobtrusive lettering, and stark colors. Through it all, the pressure put on him is palatable — to be "good," to not offend, to make something of himself and prove the naysayers wrong, not only for his sake but as a proxy for an entire community.

The overarching mystery that funnels itself into this new story arc is fraught with tension as well, forcing Hark to make hard decisions as the scrutiny of law enforcement and two communities threatens to explode in manners that far outstrip the relatively smaller amounts of bloodshed that have occurred thus far. Balancing all of that with this cornucopia of characterization can't be easy, but it's done here with enormous skill and care. The research and striving for accuracy don't get in the way of powerful storytelling.

There is a literary level of quality here that should have all the awards hurling statues at this series. If you want a seat on the bandwagon, there's still room. RATING: BUY.

Good Asian #5
By Pornsak Pichetshote, Alexandre Tefenkgi
NEW STORY ARC Suffering a traumatic loss, Edison Hark relives the pivotal and contentious moments that led a Chinese-American to become a cop in 1930s America, as the 'secret origin of Edison Hark' is revealed. 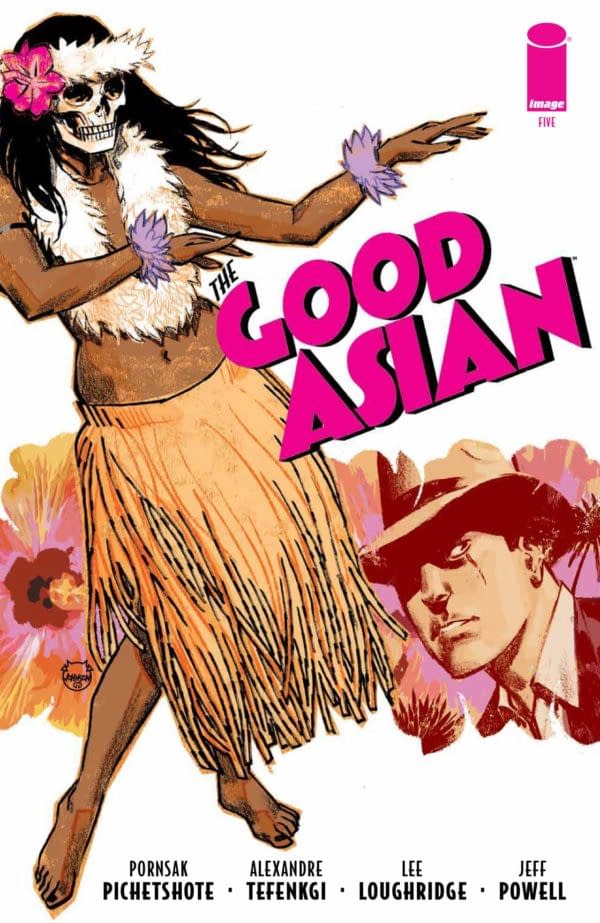 Review by Hannibal Tabu
8/10
Caught between the Chinese immigrant community’s expectations and the monolithic weight of 1930s American society.
Credits
Editor
Will Dennis

Introducing new characters in a day and age when we don't have the Order of Battle handbooks of yore or even file cards on action figures can be a chore.

Imagine if you will the concept of Luke Cage — wrongfully imprisoned, experimented upon, given superpowers — and then add a Latinx twist along with a

A mystery is hard enough to do, but veering between copaganda and glorifying crime enhances the level of difficulty. Newburn #1 spotlights Easton Newburn,

With a huge, splashy finale full of gigantic visual spectacle worthy of a Marvel TV series, Mister Miracle #6: The Source of Freedom closes down this

As a parent, Eddie Brock should know that the one way to guarantee your kid will bond with a symbiote is to tell him not to. Preview Venom #2 here.

Concluding the DC portion of Friday Night Previews this week is Wonder Woman Historia The Amazons #1, in stores on Tuesday.

Lady Lotus is the focus of this preview of The Marvels #6, which will explore the character's entire history, according to the solicit.

In this preview of Wonder Woman 2021 Annual #1, a mysterious man named Altuun will mansplain Amazonian history. What does Al know, and can he be trusted?

Darth Vader is really pissed in this preview of Star Wars Darth Vader #18, as you would be too if you just wasted all your time in a pointless super-mega-crossover event.

Wonder Girl #5 is in stores from DC Comics on Tuesday, and in this preview, Yara dumps an entire cup of ambrosia all over the floor of Mount Olympus.