Grim #4 delighted me with spectacle. The very first panel is a splash (cut from the top of the page to the bottom of the page) of a monstrous tower in the afterlife, and on the second page (which is a double-page splash), the crew jumps off of it.

After that, it's yet another double-page splash as Jess, Eddie, and Co. land inside a Las Vegas fountain. Death, apparently, ran away to Vegas. The team Dr. Stephanie Phillips, Flaviano, Rico Renzi, and Tom Napolitano always put in something a little bit extra (whether it's an instantly recognizable word balloon of Death speaking through a Vegas party girl), and it's becoming recognized as a calling point for Grim #4. Now that the series nears the end for the first arc, there's always something visually exciting going on.

This may be why readers are clamoring for the series. As Rich notes, Grim defies standard attrition:

Comic sales tend to follow a predictable pattern. The first issue gets the highest orders as retailers try to gauge demand in their stores and customers sample new series. There's typically a big drop on issue #2 followed by steady attrition as retailers finetune their orders and often readers lose interest or move to trades. Notable exceptions to this include The Walking Dead, Saga, and Something Is Killing The Children and even those saw single issue increases tied to the release of the first collection which creates a natural opportunity to onboard new readers. With an over 12% increase in orders from issue #2, and a 35% jump from initial orders to FOC, Grim is joining this rare club rather early.

And while Grim isn't my personal favorite series from the explosive publisher (that'd be the now-completed Faithless), it's a fine, reliable series nonetheless. Boom hosts a preview of the issue here.

With her very afterlife at stake, Jess must confront a dangerous figure, raising questions about her own death. Now a fugitive, Jess needs answers and is running out of options. Luckily, a new, powerful scythe might be the key to deciphering this entire mystery! 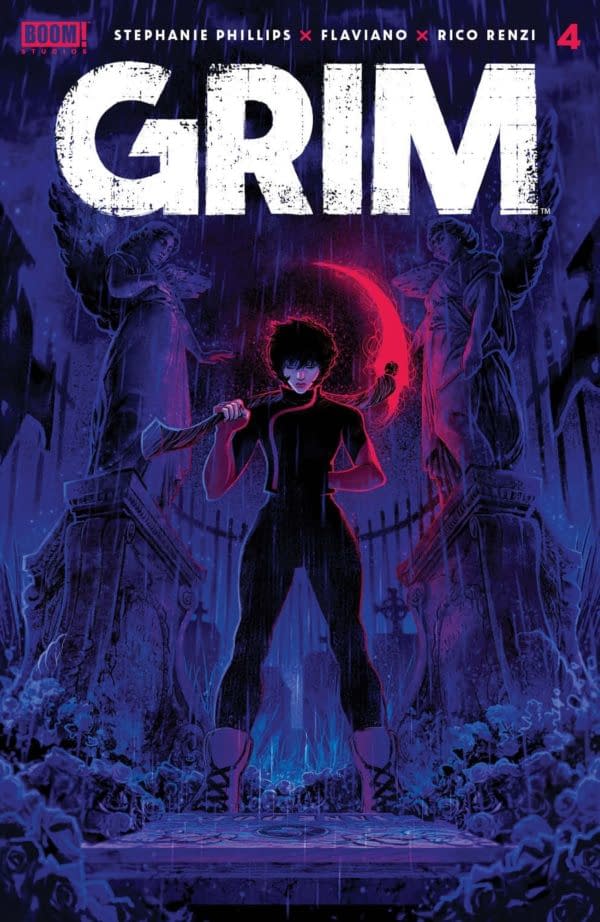 Review by James Hepplewhite
6.5/10
Grim #4 delighted me with spectacle. The very first panel is a splash of a monstrous tower in the afterlife, and in the next page, the crew jumps off of it.
Credits
Writer
Dr. Stephanie Phillips
Artist
Flaviano
Colorist
Rico Renzi
Letterer
Tom Napolitano

Mind MGMT: Bootleg #2 reunites the Crimson Flower team of Matt Kindt and Matt Lesniewski. In this issue, another recruit (this time in India) is brought aboard.