Last week saw the publication of Powers Of X #5, which laid out a redacted version of the members of the Quiet Council of Krakoa. Including the members from the Hellfire Club, three as requested by Emma Frost. 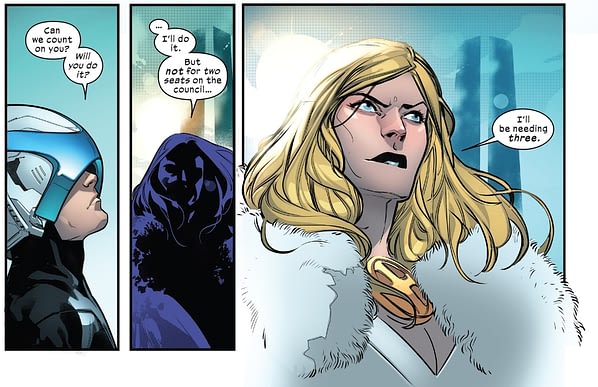 Herself, the White Queen, Sebastian Shaw, the Red King and… one other.

Some sites such as Comics Beat were sent digital versions of the comic book in advance by Marvel Comics (Bleeding Cool does not get such advance copies) and were able to use that to redact the redactions, posting the following:

With Marauders writer Gerry Duggan seemingly tweeting confirmation of this.

We've been telling you for months who the Red Queen would be. Folks, get your orders in for Marauders. pic.twitter.com/7dsSe3PeMf

And Marvel e-mailing out the following (which we did get), with Kitty Pryde meeting Emma Frost and getting 'An Offer You Can't Refuse'.

Well, with the release of House Of X's final issue #6 today we have an answer. No. Because while the list is only partially redacted and does not name the third member, we have a different title.

If she is the third member of the Hellfire Club that is part of the Krakoan Quiet Council, it's not as the Red Queen. But as the Red King.

House Of X by Jonathan Hickman and Pepe Larraz concludes today. Powers Of X #6 is published next week.

Today's Marvel Comics July 2021 solicitations has, as ever, much to reveal. In the case of Savage Avengers #22, the news that Conan The Barbarian,

Lourdes Chantel was a mutant teleporter and lover of Hellfire Club's Black King, Sebastian Shaw. She tried to keep Shaw from the Hellfire Club but failed,

It's Shang-Chi Vs Wolverine From Marvel in July

Today's Marvel Comics July 2021 solicitations has, as ever, much to reveal. In the case of Savage Avengers #22, the news that Conan The Barbarian,

Is Extreme Carnage a new event from Marvel, or the latest in a long line of mutations of a single event that has become a crossover pandemic?

Lourdes Chantel was a mutant teleporter and lover of Hellfire Club's Black King, Sebastian Shaw. She tried to keep Shaw from the Hellfire Club but failed,