Doomsday Clock #10 was originally intended to be out in October 2018 and it should all have been over by Christmas, giving plenty of scope for the return of the JSA, Legion and Shazam.

Doomsday Clock #10 was solicited for the last week of March 2019.

On February 28th, it slipped from 27th of March to the 3rd of April.

On March the 7th, it slipped back to the 10th of April.

On March the 13th it slipped back to 17th April.

On April the 3rd it slipped another week to May 8th.

Last week it slipped another week to May 15th.

Can you guess what happened this week? Can you? That's right… May 22nd.

Which was also the date that Doomsday Clock #11 was meant to come out. That has now slipped a week to May 29th.

As for Geoff Johns' other comic for DC (say what happened to the Killing Zone titles?), Shazam #5 and #6 remain at their current positions, 8th of May and 22nd of May. I will keep an eye out… 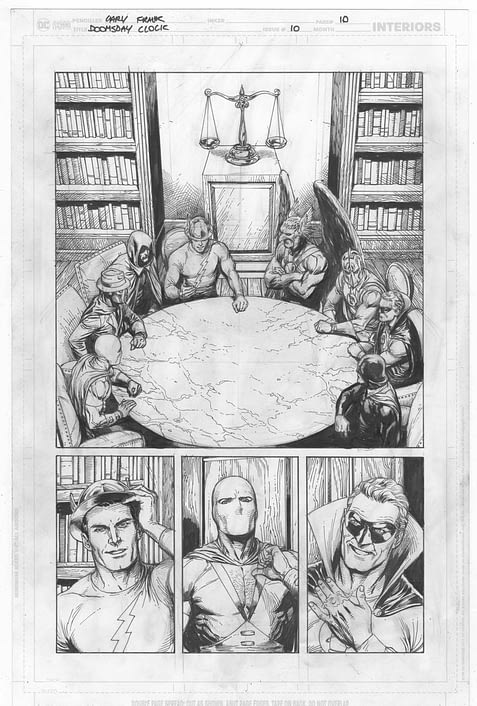 DOOMSDAY CLOCK #10 (OF 12)
(W) Geoff Johns (A/CA) Gary Frank
This stunning issue of the critically acclaimed hit maxiseries reveals the secrets behind Dr. Manhattan and his connection to the DC Universe.In In Shops: May 22, 2019
Final Orders Due: Apr 29, 2019
SRP: $4.99

DOOMSDAY CLOCK #11 (OF 12)
(W) Geoff Johns (A/CA) Gary Frank
The critically acclaimed series by the renowned team of writer Geoff Johns and artist Gary Frank marches toward its conclusion. In this penultimate issue, the truth behind "Rebirth" is revealed as Batman searches for the one person he believes can help him save the world…Rorschach!In Shops: May 29, 2019
Final Orders Due: Apr 29, 2019
SRP: $4.99