We were just pointing out that Marvel had released one Inferno house ad that we talked about last week as coming, and that we expected the second with Destiny, Mystique Emma Frost to follow. But rather than that, we got a third one with Psylocke, Bishop, and Colossus who have all been working for Krakoa on a variety of missions, and have suffered in the process.

And we can't trust them either? And what about the anticipated "Mystique, Moira MacTaggert, Destiny – Our Enemies Cannot Be Trusted". Well, on the current form, we will be updating this article shortly to include that. But until then, here is something we should definitely not have seen, that features all three. Shhhh… you didn't see this here, right?

This is also the week that lots of comic shops switch over their Marvel orders from Diamond to Penguin Random House, so Marvel really want them to be aware of this one, I guess. UPDATE: Here we go, as predicted.

A week ago, Bleeding Cool told you that Marvel Comics was planning to run two house ads ahead of the launch of Inferno, and they seem to harken back a little to the classic New Mutants – Do You Know What Your Children Are? house ads back in the day. The first shows Magneto, Emma Frost and Professor X, side by side staring at the camera, with the headline "Xavier, Emma Frost, Magneto, Our Leaders Cannot Be Trusted" with Inferno starting in September. This is followed by another house ad with Mystique, Moira MacTaggert, Destiny in a similar pose with the legend "Mystique, Moira MacTaggert, Destiny – Our Enemies Cannot Be Trusted" and now Colossus, Psylocke, Bishop. Our Allies Can't Be Trusted." There's really not a lot of trust around right now.

Because up to this point, Moira MacTaggart was seen on the side of the leaders, albeit it, hidden in the bowels of Krakoa. What if that wasn't true? What if she was buried there by the Quiet Council? We had been led to believe that it was Moira who forbade the Quiet Council from resurrecting Destiny for Mystique, as pre-cognitives could foil the Krakoan plans. And that Destiny had previously commanded Mystique that if that request was refused, she should burn the place to the ground. And that may have started with the Marauder boat. But here it appears that Moira, Destiny, and Mystique are on the same side, opposed to the Quiet Council. Did something else go down that we are unaware of? Possibly, this is a Jonathan Hickman-showrun operation after all. Inferno is coming… 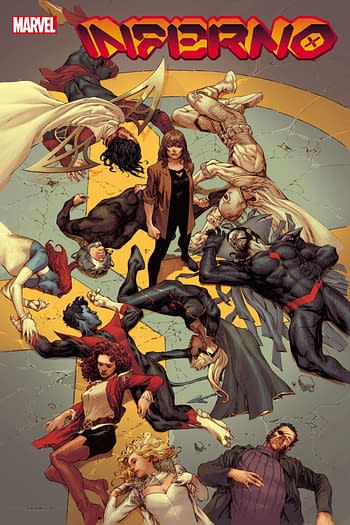 INFERNO #1 (OF 4)
MARVEL COMICS
JUL210520
(W) Jonathan Hickman (A) Valerio Schiti (CA) Jerome Opena
THE CULMINATION OF JONATHAN HICKMAN'S X-MEN BEGINS HERE! "There will be an island-not the first, but the last…" Promises were made and broken. The rulers of Krakoa have been playing a dangerous game with a dangerous woman, and they are about to see how badly that can burn them. Mastermind of the X-Men JONATHAN HICKMAN brings his plans to a head, joined by an incredible lineup of artists beginning with VALERIO SCHITI… as one woman follows through on her promise to burn the nation of Krakoa to the ground. Rated T+In Shops: Sep 29, 2021 SRP: $5.99

INFERNO #2 (OF 4)
MARVEL COMICS
AUG211082
(W) Jonathan Hickman (A) Stefano Caselli (CA) Jerome Opena
FEEL THE FIRE! Secrets. Lies. They have a way of coming out and biting you when you least expect them. The secrets and lies of Krakoa will shake it to it foundation. Head of X Jonathan Hickman, continues a tale of consequences with one of his first Marvel collaborators, artist Stefano Caselli! RATED T+In Shops: Oct 27, 2021 SRP: $5.99

Advance Reorders Time! Greetings from the coal face of the direct comics market. Where retailers try to increase their orders of certain comics ahead of

Now The Comics Industry Is Running Out Of Bags And Boards

Bleeding Cool has previously reported that the comics industry in the USA is running out of paper. And around the world, there are serious shipping,

Marvel's Masked Raider To Be Revealed In 2022

Here are the full Marvel Comics January 2021 solicitations, which begins with the X Lives Of Wolverine (which stands for the Te Lives of Wolverine) and

French Senagal comic book creator Juni Ba, creator of the graphic novel The Unlikely Story of Felix and Macabber, the comic Djelilya from TKO, and

Bolero is a one-movement orchestral piece by the French composer Maurice Ravel, originally composed as a ballet commissioned by Russian actress and dancer

Advance Reorders Time! Greetings from the coal face of the direct comics market. Where retailers try to increase their orders of certain comics ahead of

Now The Comics Industry Is Running Out Of Bags And Boards

Bleeding Cool has previously reported that the comics industry in the USA is running out of paper. And around the world, there are serious shipping,

Marvel's Masked Raider To Be Revealed In 2022

Marvel to Collect Everything They Published in June 1962 as Omnibus

Celebrating the debuts of Spider-Man, Thor, and Ant-Man, Marvel will collect every comic they published in June 1962 in an omnibus.