By framing the story in relatable, genuine character moments, Nightwing #89 does a rock-solid job of creating room for a friendship between Dick Grayson (Nightwing, ICYMI) and Jonathan Kent (son of Kal-El), scions of the "World's Finest" heroes. Unfortunately, this issue does such a great job setting the table that it doesn't serve enough food to fill you up.

Years ago, Batman and Nightwing tracked down a lost pre-pubescent Jonathan Kent who'd gotten lost flying at night after being warned that's exactly what would happen. With a little bit of candy and a little bit of juggling, Nightwing was able to calm the pint-sized weapon of mass destruction, and a friendly bond was formed.

Fast forward a few years, and Jonathan Kent has experienced spacetime distortions that have aged him to college-aged adulthood. Nightwing is still, clearly, in his prime and now has a billion-plus dollars inherited from the dearly departed Alfred, one of his father figures (no idea how Julia Pennyworth, Alfred's actual daughter, feels about that). Nightwing (as Grayson) is the largest investor in The Truth, a Greenpeace-meets-Wikileaks organization dedicated to the true ideals of the fourth estate that has a few super-powered people on hand in case stuff gets real.

Grayson and Kent run into each other in their alter-egos just as a spate of super-powered people are murdered around the world. They just begin their shared investigation when the issue comes to an abrupt stop, and you'll have to continue the story in the next issue of Superman: Son of Kal-El.

Let's be clear — Tom Taylor does some of the best character writing in the industry right now, and the team of Bruno Redondo, Adriano Lucas, and Wes Abbott are making luxury car-class comics art. However, the challenges with the momentum of "rich Dick Grayson" getting established keep popping up when he has to hang out with the bigger licensed icons. It's not a bad thing, but it'd be nice to see this just run in its own lane for a while. RATING: HONORABLE MENTION.

Nightwing #89
By Tom Taylor, Bruno Redondo
Superman/Nightwing crossover! Years ago, when Robin took his first uncertain steps away from Batman as his own hero, Superman stepped in and offered Dick Grayson crucial advice, support, and a name: Nightwing. Now it's time for Nightwing to return the favor. 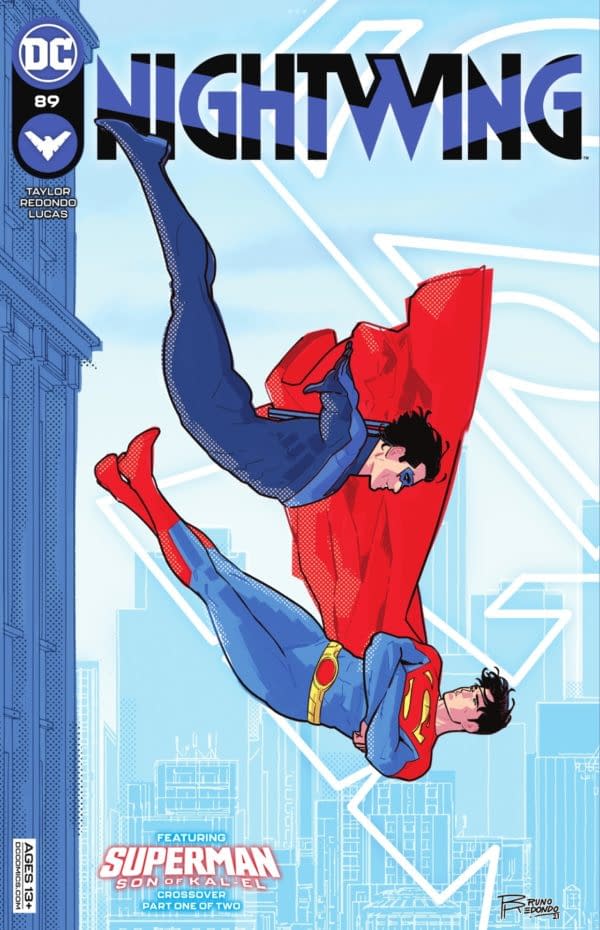 Review by Hannibal Tabu
7.5/10
Dick Grayson’s heading to Metropolis, Jonathan Kent remembers an old friend and the key to the problem is exactly as predictable as you might expect.
Credits
Editors
Ben Abernathy, Jessica Chen, Jessica Berbey