Rebellion has released the first-ever collected edition of Fran of the Floods, a 1970s disaster comic original serialized in the weekly girl's comic Jinty. 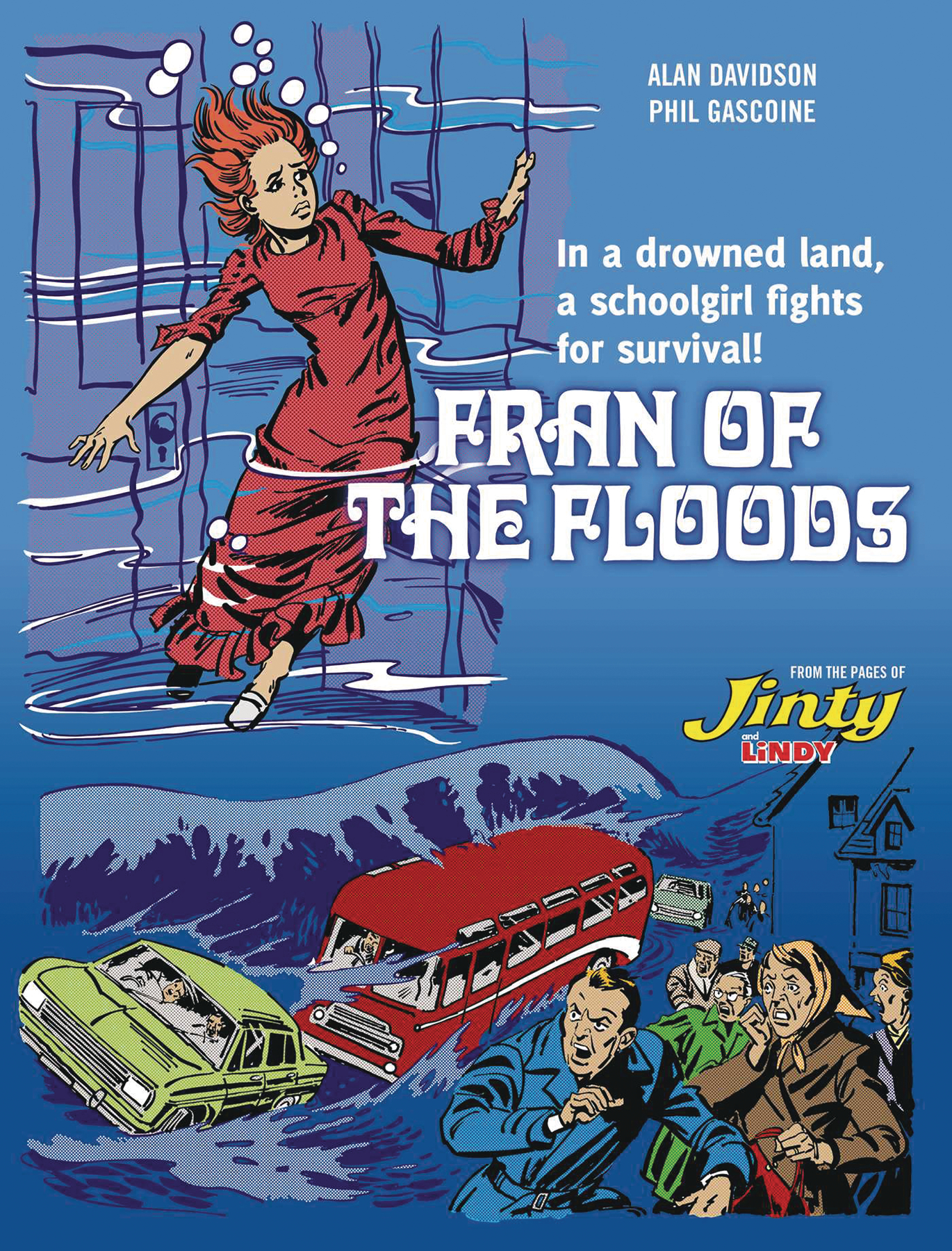 Written by Alan Davidson and drawn by Phil Gascoigne, who would go on other types of British comics including 2000AD, football and war comics, Fran of the Floods is about a middle-class English girl from the suburban town of Hazleford facing a disastrous flood that's a result of an unending rainstorm covering all of the United Kingdoms. As food shortages deepen, essential services and the government break down and people deteriorate into looting, crime and mob violence, Fran has to leave her home and make her way up to Scotland to find her missing sister. Along the way, she encounters all kinds of people, good and bad, all coping with the floods, rain, starvation and disease. Just your everyday British dystopian road movie story.

It's a shame there aren't any girl's comics in Britain anymore. Titles like Jinty and Misty used to be a normal sight next to Beano, Beezer, Topper, 2000AD and a whole sundry list of comics you could find at the newsagents in the UK. They were cheap and kids had easy access to them. They were often the gateway to many kids getting into reading. Alan Moore laments the loss of comics that are easily available to working class kids who can't drop up to four or five quid on a single issue of a comic anymore. And the British comics industry was a fairly small circle – the same writers and artists often worked on all the comics. Creators like Pat Mills, John Wagner, Alan McKenzie would go from girls' comics to creating characters like Judge Dredd, Rogue Trooper and so on at 2000AD a few years later.

That means that many of British girls' comics of the 1970s were very weird.   Fran of the Floods could be considered a typical entry in the pages of Jinty, which often features dark and gothic stories. It's very much in the zeitgeist of the dystopian Seventies when awareness of Climate Change and Global Warming was starting to hit the popular consciousness. There were a lot of disaster stories in Seventies British TV, movies and comics.

There's a lot of John Wyndham in Fran of the Floods, with its themes of a preternatural disaster bringing down civilization in a few short strokes as people turn into a mob. Fear of the mob is a common theme in British disaster fiction from the 70s, and with its publication in 1976, Fran of the Floods comes at the same time that Punk began to rise in the UK. Fran Scott finds her safe, bucolic middle-class life collapse as the floods drive the water levels higher and higher and she's forced to take to the road to find her missing sister up in Scotland. Along the way, she encounters a quasi-fascist commune, a plague-ridden village that's been quarantined, wild animals, the city of Glasgow empty save for one deranged guy who declares himself the King of Glasgow. There's a surrealism and oddness, even some dark comedy, to the situations Fran finds herself in and the situations are darker and harsher than you might expect from a girls' comic. This is decades before the current trend of gritty, dark Young Adult dystopian novels.

The best part of these serials from British weekly comics in the Seventies is the finite nature of the stories. They have a beginning, middle and end, and usually have a satisfying ending, sometimes tragic, sometimes hopeful, but never sell the themes or characters short. Fran of the Floods is no different – Alan Davidson and Phil Gascoigne take the ideas and characters as far as they can go before an ending that feels both earned and complete. It's a masterclass in storytelling, pacing, dramatic and thematic progression and character motivation. This comic is not just a piece of history or storytelling exercise, it's an example of the types of things comics can do that not many current titles do anymore.