For many issues, Vader was tested by his master. Forced to operate without many of the advantages and weapons he's come to be known for, he has fought his way to the edges of the Emperor's secrets and recognized the wheels within wheels, bending the knee once again. In Star Wars: Darth Vader #14, he is restored to his fully armored glory, and he again prowls the familiar halls of Coruscant, ready to serve Imperial justice as he deems fit.

Good news for the Empire, but bad news for certain parties the Emperor promised power … if they could kill Vader. One of his intimates, Administrator Sly Moore, is an Umbaran, "shadow people" able to see the ultraviolet spectrum and rumored to be able to influence and manipulate others. She's part of a cadre of conspirators who seek greater power at the expense of the Dark Lord of the Sith, and they are up against the wall.

Greg Pak's script doesn't actually give Vader many lines, letting Ochi of Bestoon to speak on his behalf and act as a plenipotentiary with a wry sense of humor, narrating things and mocking the players as he goes. The art from Raffaele Ienco, Jason Keith, and Joe Caramagna does simply miraculous things with Moore's facial expressions and the moments of tension and shock, totally grasping the Star Wars grandeur.

The main complaint one could make is that Vader is a supporting character in his own title. Even cowed, determined to fulfill his eventual note, "I must obey my master," he needs more agency and urgency to make his bluster and bravado work. Nothing bad here, and this came closer to the power and the glory, but only in passing. RATING: HONORABLE MENTION.

Star Wars: Darth Vader #14
By Greg Pak, Raffaele Ienco
'THE BLADE BEHIND THE CURTAIN' For decades, no figure has stood as close to the EMPEROR with so much mystery surrounding her. Who is the UMBARAN? What is her role within the EMPIRE and in the WAR OF THE BOUNTY HUNTERS? And what happens when she emerges from the darkness to challenge Darth Vader himself? Featuring an unprecedented look at the inner workings of the Emperor's inner circle – and the return of IG-88! 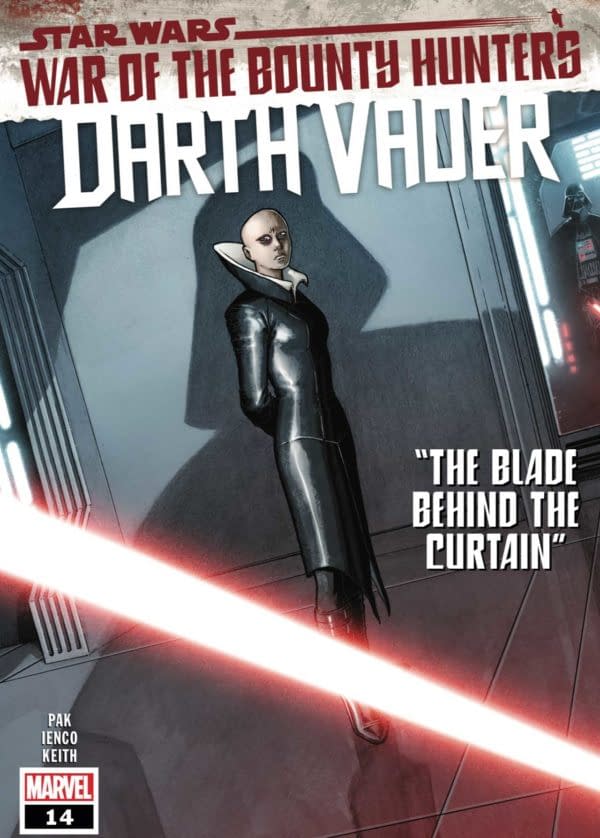 Review by Hannibal Tabu
7.5/10
Vader is back in black and on his way into the big crossover, but it’s not Crimson Dawn’s game if Vader’s ready to flip the board.
Credits
Editors
Akira Yoshida, Mark Paniccia, Tom Groneman

Ever since we got the first inkling of what Marvel was planning for Free Comic Book Day, Bleeding Cool has been telling you it was a big Spider-Man

DC Comics Cancel The Joker As Well As The Justice League

Who can follow James Tynion IV and Guillem March on The Joker? Nobody it seems, their final issue of The Joker in April, issue 14, will be the final issue

Welcome to the full solicitations for DC Comics for April 2022. Keep checking back as we will be adding imagery and updating this post. And yes, not just

Here are the full Image Comics April 2022 solicits and solicitations, including... Ninjago Lego? What a 30th anniversary year it will be for Image Comics.