Sunday morning at NYCC, Saturday Night Live actor Taran Killam showed off his new IDW comic The Illegitimates to a full panel of enthusiastic fans. Well, after talking to most people in line, they actually went into the room to get a good seat for The Hobbit panel that was taking place after this one. This had me taken aback, and also feels a little rude, but hey: I guess that is comic-con.  The members of the panel themselves took it all in stride, even joking about how the book was inspired by Tolkien and spoiling The Hobbit books. But by the end of the panel, Killam seemed to have everyone over to his side and interested in his clever new book. He was joined on the panel by writer Marc Andreyko, and IDW's Dirk Wood and Chris Ryall.

The panel opened up with Taran giving a little insight into how the book came together, and it turns out it was a very long process. He came up with the idea 4 or 5 years ago, being a big James Bond fan (his favorite Bond being Sean Connery and loving Goldfinger) and a big fan of team movies. Because of schedules and lack of funds (he had not gotten hired at SNL yet), it took him and Marc awhile to get the first issue done. When Taran approached Marc with the book, Marc stated that the first arc was pretty well planned out already. Since they are friends, the collaborative plotting of the issues went very smoothly, with Marc claiming Taran does most of the heavy lifting and him "mostly just sanding the edges". Artist Kevin Sharpe is handling the art duties, hand picked by Taran himself. According to the panel, by the time the first issue hits in December, the first arc should be completely finished and ship on time, which garnered much applause. According to Taran and Marc, IDW is where the book was always going to go, calling it a love affair from their first meeting in San Diego and Taran's love for the Ninja Turtles sealing the deal (IDW publishes the TMNT comics these days). Chris called it a no-brainer from the first pitch of the comic.

The concept of the book is very original. It starts out by showing a spy named Jack Steele. This is not a spoiler, but he dies very early on in the opening issue. To replace him, the agency he works for replaces him with a team made up of five of his bastard children, who all inherited one of his abilities. Seems that agent Steele had quite a weak spot for the ladies and not a lot of love for protection. The agency decides these five need to be trained to take care of the book's main villain, Dannikor. Both Taran and Marc seem to be quite excited to continue the book after the initial arc as well, claiming to have many stories to tell about each individual character on the team.

After reading the first issue (there were exclusive copies available after the panel with a special wraparound cover by Bill Willingham), the series really hits the ground running in the first few pages, showing us Jack meeting the five women who will become the mothers of the children, then straight into a fight between Steele and Dannikor that leads to his demise. It feels just like reading a Bond script straight from the early, endearingly cheesy days of the franchise. The comic then begins to introduce the five children on gorgeous splash pages, allowing Sharpe to flex his artistic muscles a bit. The care he puts into each intro page is very evident, as each character is given a bio and very distinct features that set them apart from each other. Killam and Andreyko give you more than enough information on each character here as well, providing everything you need to know about each of the five team members. It was very easy for me to get lost in thematic feeling of a team coming together; this is one of my favorite scenes in any good team story. The sinister Dannikor is then alerted at the end to hold up, he may not have won just yet, ending the first issue with enough intrigue that left me instantly wishing issue 2 was also available.

Between the crisp writing, the quick pacing, and beautiful art, it looks like the world will be in quite capable hands moving forward.  Give it a look, you will not regret it. Maybe even a few dwellers of Middle-Earth will be checking it out as well.

The Illegitimates #1 comes out on December 18. 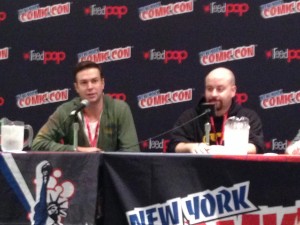 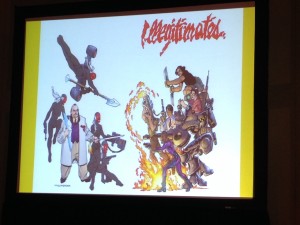 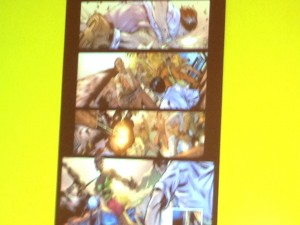 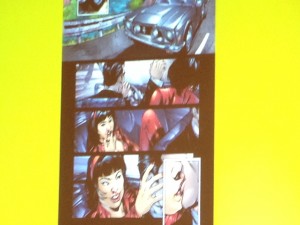 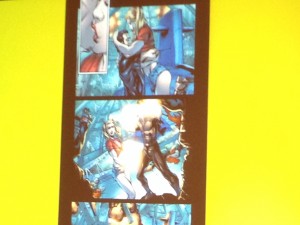 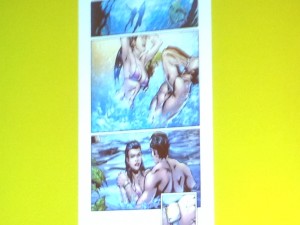 Will the New Avengers attempt to overturn the results of the New York City mayoral election in Amazing Spider-Man #66? Check out a preview here.

Time Corps is a science fiction series from Venice, California-based publisher Wunderman Comics, offering a dramatic slant on what happens after we die