It's a bit of a trip to think that LEGO Star Wars video games have been around 17 years this year and are almost as well-known as the films and TV shows. Traveller's Tales, now known as just TT Games, basically became the end-all-be-all developer of all things LEGO games once the first game in 2005 became a smash hit. It brought the world of Star Wars to a younger generation, enraptured current fans with a nonsensical version that was fun to play, it even helped sell game consoles at one point to people who only wanted to play these titles, and ultimately helped make the company a powerhouse within WB Games' network of developers. Now, nearly two decades later, we're practically looking at the company's magnum opus with LEGO Star Wars: The Skywalker Saga. But after nearly three years worth of waiting for this game to come out, was it all worth the wait? We took our time with this one to properly review it (sorry for the delay).

So getting to the heart of the matter, the game is a complete rework of previous games in the series. This is not like previous collections where it's a rehash of the older titles, this is a completely new system and way of doing things. That doesn't mean it doesn't retain the charm of previous games, it just means that whatever you think you know going into it you might as well tear apart like that classic medieval LEGO castle set and be prepared to have the devs rebuild it into an X-Wing. No longer is the camera just stationary for blaster battle, it's now an over-the-shoulder third-person view.

No longer are you just slashing at things with the lightsaber, now you have an array of attacks to utilize against enemies and use for puzzle solving. No longer are droids just used to open doors, now they have an array of functions to get you through the open maps and goal-centric levels. Even The Force has been given a total rework as to how it works in this world and what you can do with it. This made for greater gameplay experiences and a lot more challenging times than just mashing the attack button.

The LEGO Star Wars storyline allows you to take on all three trilogies in whatever order you see fit, however, you must go in order. If you pick the original films, you'll need to start with Episode IV before you're allowed to go onto Episode V and VI. From here you'll find yourself going into two different types of modes: Straight-Forward and Open-World. The Straight Forward moments are must-play content, such as Princess Leia giving the Death Star plans to R2-D2 and C-3PO to escape the ship with them. You have to play this and succeed at the mission to move on. However, once you hit the planet and become Luke Skywalker's droids, the game shifts to Open-World where you have the ability to go explore a region of that world to find secrets, unlockables, and Kyber Bricks to help open up new options for your characters. (More on that later) Ultimately, if you want to progress, you have to play through the story pieces, but it's nice to break up the monotony sometimes with a random search of the desert.

But don't think of a second that the story here is boring or the same 'ol you've heard before. True to LEGO Star Wars fashion, the game has taken much of the original script for all nine films and spiced it up with some humor throughout the game. Even in the most serious of situations, the team has managed to plant a few well-crafted jokes in the mix to lighten the mood and remind you that this is not that serious of a video game. You're literally playing with toy versions of the characters who can take their heads off their bodies, build weird objects in seconds, and question whether or not the fourth wall actually exists. Which we found to be one of the best parts of this game and a real unsung bonus that makes this enjoyable for not only adults but for kids as well. It makes for an experience you can enjoy together.

One of the more interesting aspects of the game is going around collecting Kyber Bricks, and as we mentioned before, they make for a great way to break up the usual gameplay. If not for the fact that they are nearly essential, you could practically skip them and just run around having fun with some of the weird stuff they programmed into the game. But this way you at least get rewarded for your efforts in what is essentially a long series of minigames. Like locating power supplies to unlock chests, vaulting up a series of polls to find them in hard-to-reach places, playing soccer using The Force, weird futuristic versions of the Shell Game, making Wookies sing, target practice of various types, searching through dirty laundry, and more.

The Bricks are used in the game to upgrade your characters and their abilities, and depending on what you put them into, you can either level up everything gradually or make a specific kind of class super powerful. There are nine classes you can upgrade: Jedi, Hero, Scavenger, Scoundrel, Bounty Hunter, Villain, Dark Side, Astrometric Droid, and Protocol Droid. And much like the ever-present skill trees you see in almost every RPG these days, you'll put Bricks into different skills to make each of these classes better at what they do. There are specific ones you need to snag, such as being able to collect LEGO studs from great distances or build objects faster. But the majority of them are basically upgrades that make things easier in a game that's technically already a piece of cake. Unless you amp the difficulty up, then you might actually need rapid-fire blasters to take out an enemy that is taking forever.

The last aspect of this LEGO Star Wars title that really shines is the character collection. Much like previous entries, it's satisfying when you collect new characters from completing missions and finding them out in the wild in various ways. However, and we say this with all the love for collecting, it's best to wait until you finish the game to take this on. A lot of the characters are a pain to collect when you don't have easy access to bounty hunters and dark side Force users, let alone a supply of studs to pay for some things and some enhanced abilities. As tempting as it is to go run off and collect that version of a Sith Trooper who is carrying a sword instead of a staff, the reality is most of them are unnecessary to complete the game, and are only really obtainable after you get the right set of characters for easy access to everything on all 20+ planets in the solar system.

Overall, LEGO Star Wars: The Skywalker Saga was an amazing experience. I could sit here and sing the game's praises for hours, but let's be real, what am I really going to say here that hasn't been said above? This was an absolute joy to play, and furthermore, a joy to see others play. One of the reasons our review is a little late is because I wanted to see how well kids could adapt to it by having some of my friends with kids come by and play it for a bit (before their parents took the other controller to join in 10 minutes later). When you create a game that is fundamentally enjoyable, easy to learn, not too complicated in the side content, and attracts the interest of everyone from a five-year-old to a 60-year-old grandpa… It's a winner regardless.

Anyone claiming this game missed the mark or hates it for the inclusion of certain movies or can only focus on the imperfections is missing the point. And to a greater extent, missing out on the fun. Which is fine, if they wish to be that kind of fan that can find no joy in anything made after 1983, so be it. It just means there's more to love for the rest of us, and that includes this game. 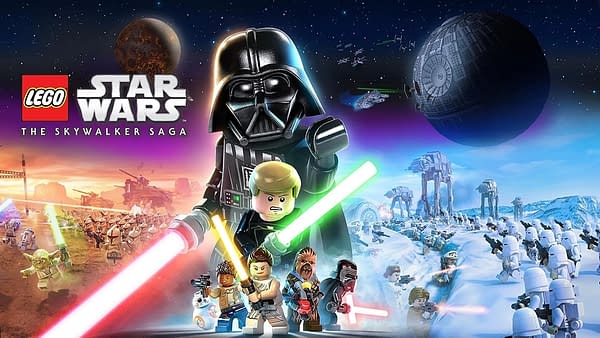 INDIE Live Expo 2023 Dates Revealed For This May

INDIE Live Expo 2023 will be taking place in May, as the summer showcase looks to capitalize on the successful winter event.

Dive into a ton of new content for The Seven Deadly Sins: Grand Cross, as Netmarble has released Chapter Six for the game.

Fireshine Games Announces Reka To Be Released In 2024

Fireshine Games and Emberstorm Entertainment have revealed their new game Reka is coming to PC sometime in 2024.

Yager has shown off a preview of what's to come for Season 3 of The Cycle: Frontier as a brand new monster has been revealed.

Would you like to try out the new online RPG World Eternal Online? The devs are currently running an online alpha.

Get a better look at the world in general as Nintendo reveals a new trailer for Kirby’s Return To Dream Land Deluxe.

INDIE Live Expo 2023 Dates Revealed For This May

INDIE Live Expo 2023 will be taking place in May, as the summer showcase looks to capitalize on the successful winter event.

Dive into a ton of new content for The Seven Deadly Sins: Grand Cross, as Netmarble has released Chapter Six for the game.

Fireshine Games Announces Reka To Be Released In 2024

Fireshine Games and Emberstorm Entertainment have revealed their new game Reka is coming to PC sometime in 2024.

Yager has shown off a preview of what's to come for Season 3 of The Cycle: Frontier as a brand new monster has been revealed.

Would you like to try out the new online RPG World Eternal Online? The devs are currently running an online alpha.

Get a better look at the world in general as Nintendo reveals a new trailer for Kirby’s Return To Dream Land Deluxe.