This year, A Castle For Christmas is one of the big Christmas offerings from Netflix, an answer to the Hallmarks and Lifetimes of the world by throwing a huge budget and casting big names in the lead roles. The factory productions these holiday films have become are laughable, yet people lap them up in droves. So, when one sees Castle, you would be forgiven for thinking that this is just going to be a cookie-cutter holiday romance. That is where you would be wrong, as this sweet and charming film slowly, and I do mean slowly, wins you over.

A Castle For Christmas Is A Fun Little Movie

When famed author Sophie Brown (Brooke Shields) blows up on her friends on national television over decisions she made in her latest novel, she retreats to Scotland and decides to buy a castle. The owner, Duke Miles (Cary Elwes), does not want to sell, especially to a foreigner, but decides to take her deposit and attempts to drive her away so that he can keep the lights on. However, little do they realize that as she spends more and more time there, their relationship takes a turn that neither of them was expecting for the holidays.

A Castle For Christmas is an actual film; let's get that squared away right now. This is not one of those cookie-cutter, low-cost, cheap-looking holiday films, this is a film with a real budget, and it is apparent pretty much right out the gate — nice cameo at the beginning too. The set-up is groan-inducing, but the film comes to life once we get over to Scotland and Elwes joins the fray. He is great here, and as he and Shields grow on each other, their chemistry gets better. It takes a good long time, but when it happens, the film really takes off, which is good, because there are also some problems. The ensemble is enjoyable, if unmemorable. None of them make an impression, and that really makes the film feel like it is dragging for the first half, and our couple is still learning to love each other. There is even a moment where a traveling couple is introduced and clearly given a villain's entrance, only to disappear and never show up again. It is pretty bad, and the editing here is all over the place.

But Elwes and Shields really end up going for it in this one, and it ends up working. This is the kind of movie that is not made much anymore for theaters, just a solid adult story about two people who are a little older falling in love. There is a sweetness in A Castle For Christmas that really ends up winning you over, and by the end of the film, you would want to move to this little area of Scotland yourself. In a sea of Christmas romance films, seek this one out and give it a watch.

A Castle For Christmas is available to stream on Netflix Friday, November 26th.

A Castle For Christmas 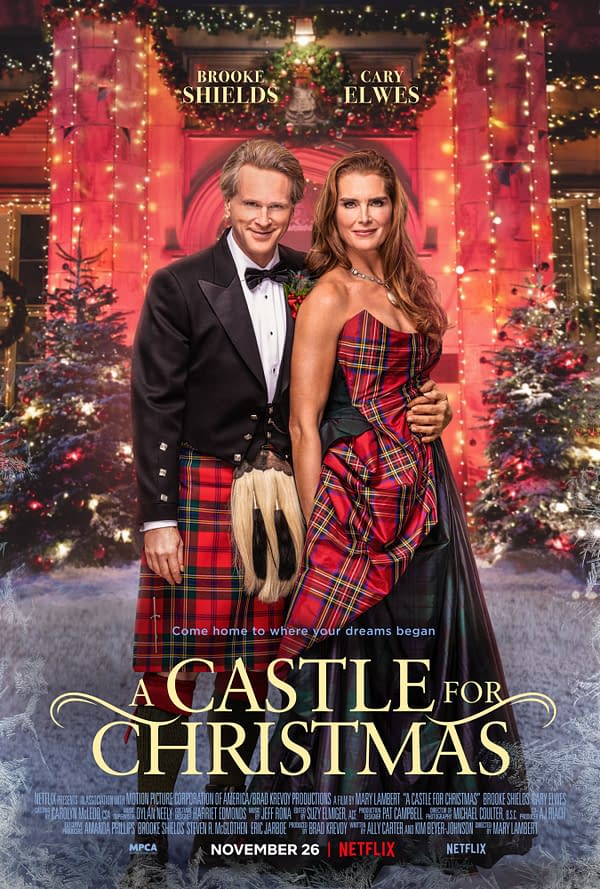 Review by Jeremy Konrad
7/10
A Castle For Christmas is far from a cookie-cutter holiday film, featuring great performances from Brooke Shields and Cary Elwes.

Man, this line of NECA Universal Monsters Ultimate figures are something else. Check out their new black & white The Mummy figure.

The packaging for the upcoming TMNT Universal Monsters mash-up figures is here, and it looks like NECA knocked it out of the park.

The details for the Halloween Kills 4K Blu-ray release are here. Watch the extended cut on digital next week, and buy the disc Jan. 11th.

Super7 has revealed and put up for preorder Ultimates Animaniacs and Pinky And The Brain figures for 2022! Check em out!

The fourth Hotel Transylvania film is out on Prime Video on January 14th, and we have a trailer for it right here.

GI Joe fans came together last night, and funded the Skystriker HasLab project, plus almost all the tiers as well. Yo Joe!

Nightmare Alley Review: An Eerie World You Want to Immerse Yourself In

In the interest of full disclosure, I have not watched the original Nightmare Alley. I did no research going into this movie about the plot and only

The details for the Halloween Kills 4K Blu-ray release are here. Watch the extended cut on digital next week, and buy the disc Jan. 11th.

The fourth Hotel Transylvania film is out on Prime Video on January 14th, and we have a trailer for it right here.

Dwayne Johnson calls Black Adam "a bad motherf***er" and talks about what drew him to the character and made him fight to get this movie made for ten years.

A new Scream tv spot debuted today, with our first look at a new, metal Ghostface mask, and some other things. The film opens on January 14th.

The first poster for Sonic 2 is here, and the first trailer will debut tomorrow at The Game Awards with Jim Carrey and Ben Schwartz.