Who says action has to be overly indulgent CG and special effects-laden affairs? Not the fun crime thriller Copshop. The film follows a wily con artist Teddy Murretto (Frank Grillo), who devises a scheme to hide inside a small-town police station by punching a rookie cop (Alexis Louder) and getting himself arrested. Little does the station realize, Teddy has a giant target on his back, a price on his head, and assassins on his tail. Gerard Butler plays Bob Viddick, a mysterious stranger who smuggled himself inside the prison by getting himself arrested.

Tensions brew as we find out the truth behind the players involved. Not precisely heavy in twists and turns, the script written by Kurt McLeod, Mark Williams, and director Joe Carnahan allows the core cast to shine as a character-driven piece enhancing the charismatic performances of Grillo and Butler. Louder more than holds her own with her male counterparts considering her previous standout performances in Watchmen, The Originals, and The Tomorrow War. The most pleasant surprise is Toby Huss, who plays assassin Anthony Lamb in the most playful and sadistic way possible. I feel Huss' role in Copshop is as refreshing for an actor of his talents as Nobody was for Bob Odenkirk.

There are lots of brainless scripts full of clichés and drivel from soulless action films, but Copshop achieves the rare balance of style and substance. Sure, it's not heavily thought-provoking, but it promises a devilishly good time that allows all involved an opportunity to shine. The Open Road Films and Briarcliff Entertainment's film, which also stars Chad L. Coleman, Ryan O'Nan, and Jose Pablo Cantillo, comes to theaters on September 17. 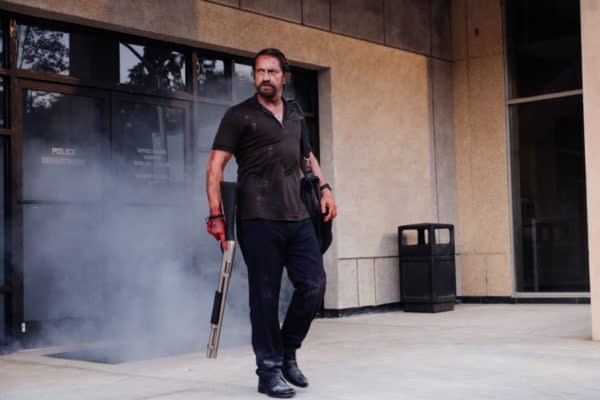 Review by Tom Chang
7/10
Copshop doesn't require any deep thought to appreciate the crime thriller. Playful, intense, and cerebral performances by Gerard Butler, Frank Grillo, Alexis Louder, and Toby Huss proof how fun action films can be without the over-the-top pomp and circumstance of tentpole blockbusters.