When Dear Evan Hansen swept the Tony Awards in 2017, it was new, novel, and had a lot to say about the current zeitgeist. Mental health, social media, suicide, parents desperate to relate to their Gen Z kids: it was all in there. In retrospect, it was also fundamentally cursed as a concept– so cursed that it's worth remembering those Tony awards were hosted by Kevin Spacey.

Since then, we've had time to re-evaluate some of the flaws of the musical: a trite tale that "the truth comes out in the end" and where the main character is maybe a bit of a sociopath? So could a filmed version with the original Evan Hansen, Ben Platt, and a completely stacked supporting cast rescue some of the more problematic elements of the source material and make it accessible to a mass audience that aren't musical fans?

Sadly, no. Even worse, they seem to have lost some of what made the stage musical so effective. There are, however, some bright spots led by the women of Dear Evan Hansen. Julianne Moore and Amy Adams shine as the mothers of two of our main characters, and Kaitlyn Dever and Amandla Stenberg bring a lot of pathos to their roles. Moore's number in the film's second act is one of the only times the movie really feels human.

Interfering with that humanity is the much-vaunted age of the cast, who are all closer to 40 than freshman year of high school. And while, yes, that is an obstacle, we should also step back and remember that people in their late 20s playing high schoolers is as American as apple pie, Happy Days, and Beverly Hills 90210.

But it does stick out a little more, as Platt's specific sweaty energy in this role plays extremely well on stage when you're watching him perform from the mezzanine– you buy that he's a socially anxious teenager. But in close-up on camera makes it seem like he is, in fact, Old Gill from The Simpsons trying to sell you a timeshare development. Yikes.

Amazingly, I still stan Ben Platt. This stems from seeing him on Broadway, specifically as Elder Cunningham in The Book of Mormon but also his other work. And ultimately, he is as much Dear Evan Hansen as Lin-Manuel Miranda will be Hamilton, no matter how many other people take up the roles. But maybe we all have too much of Platt's energy as a sociopath from The Politician in our collective memories? Or is that just his energy and persona now? And is that a fundamental part of Dear Evan Hansen?

Is it maybe a bad idea to have him in this role and an even worse idea to try to cover it up with digital de-aging jiggery-pokery? Yes, but a perspective from two actual teenagers (my kids, aged 16 and 13) who watched with me? They liked Platt. Platt's voice is the one who they listen to when they repeat the Broadway cast recording on Spotify. So maybe we middle-aged cynics all need to take a step back for a moment. It's still cursed, mind you, but maybe we can try to see beyond it.

Unfortunately, though, the film misses some really key themes and messages. Right from the get-go, the movie opens with "Waving through a Window," where Evan is actually literally tapping on the glass pane of the window of his bedroom. But that's not what this song is about, or even the story: it's about social media's false and performative nature and how disconnected it makes us from each other. You can see from the original staging, which uses actual giant screens. It's not subtle.

Therefore, the film also really fails to crystallize around a very key concept, and I can't emphasize this enough: Evan Hansen is a little bit of a sociopath, but so are we all. The film doesn't lean into the pressures created by social media and its performative nature at all. The moral of Dear Evan Hansen isn't "don't tell lies because the truth will always come out." It's that "social media platforms demand we lie to each other in subtle ways until finally they're not so subtle anymore and we're all living atop bullshit mountain together."

Nearly every character in Dear Evan Hansen not only engages in lies but demands easy answers and lies from each other. The world is a cold, cruel place full of randomness and tragedy. But what we want most of all is someone in a time of insanity to bring context to all of it with simple narratives. And a lie will not only make it halfway around the world before the truth laces ups its shoes. It will start dozens of Facebook groups, and TikTok challenges, and YouTube react videos.

We're the monsters. We're the sociopaths. Evan Hansen is just a kid with crippling anxiety and depression. Ok, a 28-year-old kid, but you get what I'm saying. Maybe it's just living through the disinformation age of the last several years, where social networks spread conspiracy theories, destroy democracy, and prolong pandemics. But someone telling a lie to make a grieving family feel a little better (and get closer to a girl you like. . . shudder) seems a lot less bad when people are eating horse dewormer instead of getting a widely available and safe vaccine.

So the problems with the film can't be fixed with recasting or digital de-aging. It missed the zeitgeist and didn't address the problematic elements of its narrative. While it hit on a very specific nerve just a few years ago, since then, we've also had other entertainment about the convergence of social media and youth. And yet, the filmed version of Dear Evan Hansen seems unaware of the new context that we're all viewing it in.

There are still good things hidden in here, and I'm still going to tear up when I hear "You Will Be Found," but this is a forgettable movie. 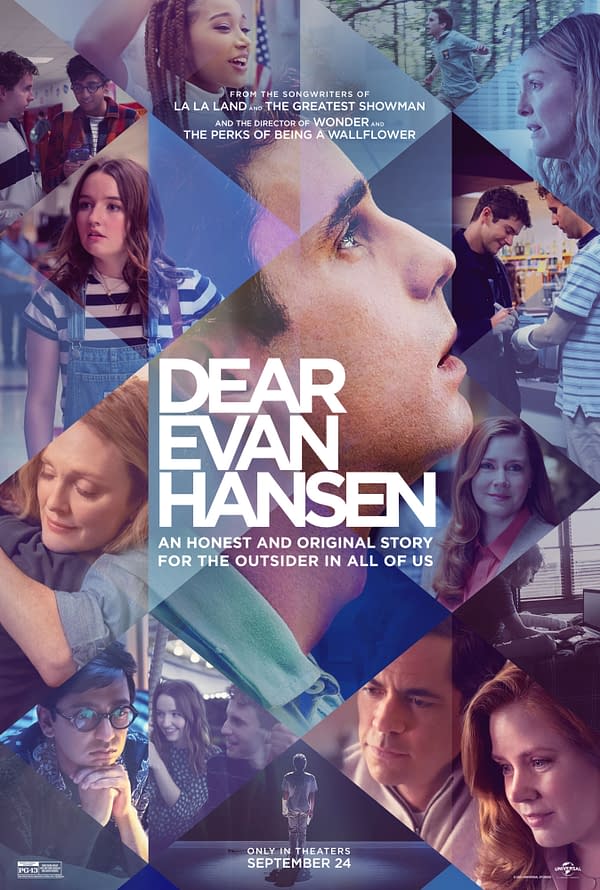 Review by Andy Wilson
4.5/10
So much of what made the stage play effective is gone from the filmed adaptation, blunting what might have been an interesting movie into a weird, cursed film. Not for fans of the musical, and not for people unfamiliar with it, begging the question: who is this even for, and what is it?

The Last Duel Review: Why Men Need To Put Their Goddamn Swords Away

You can't claim your movie is feminist if you center your male characters for the entire first ninety minutes and the climactic "last duel."

Mayor of Kingstown Shares Official Trailer Ahead of November Premiere

Ted Lasso is a masterclass in story, theme & character development, with a heel turn we're all talking about that's been a long time coming.

Puppet History covered the witch trials in 17th century France with an ending that claimed a major character is now "canonically dead." What?!

James Bond goes to space as producers try to chase Star Wars, creating one of the silliest movies to date as the franchise goes campy.

007 Bond Binge: The Spy Who Loved Me Gives Roger Moore His Propers

Roger Moore's best outing as Bond is a lot of fun, and for better or worse became a template for future Bond series tropes.

Director Matt Peters on Injustice: 'A Valentine Sent To Superman'

Dune is awkwardly paced and has the problem of very much feeling like half of a movie, but everything else on screen is so good that it's worth sitting

Everything Coming To Netflix In November

Here is everything coming to Netflix in November, including Red Notice, Masters Of The Universe, Arcane, and so much more.

It feels like Resident Evil: Welcome to Raccoon City was announced, filmed, and is coming out in a little over a month within the span of about a week.

Quentin Tarantino might make a Kill Bill 3, but he has another comedic project he'd like to tackle before that becomes a reality.

How Ghostbusters: Afterlife star Bill Murray compares the proton packs from the 1984 Ivan Reitman film to the 2021 Jason Reitman sequel.