Out of the Blue is a movie that should not exist. It was brought into existence through sheer force of will by director Dennis Hopper. It started as a Canadian Public Service Announcement movie about a troubled teenage girl who gets helped by a kindly psychiatrist played by Raymond Burr. Hopper was only hired to act in it. Instead, it ended up a searing masterpiece of family dysfunction, teenage alienation, and Punk nihilism, a seminal movie of the Punk subculture.

How did this happen? Shortly after production, the original director was fired, and somehow Hopper took over as director, rewriting the script and holding it together through sheer force of will. He centered the movie around the late Linda Manz, who was previously in Terence Malick's Days of Heaven. Manz plays Cebe, a troubled girl whose alcoholic, semi-criminal dad (played by Hopper) goes to prison for plowing his truck into a school bus that was not empty at the time. Her mother descends into sleeping around and drug addiction. Cebe only cares about Elvis, Sid Vicious, and missing her dad. Then her dad comes home from prison, and things get even worse.

To watch Out of the Blue now is to step into a past that's almost Science Fiction, a lost world of filmmaking that may be gone. Out of the Blue is steeped in 1980, a time when filmmaking was looser, more unpredictable, especially in the hands of Hopper. As a hardcore follower of the Lee Strasberg School of Method Acting, Hopper encouraged a sense of freewheeling improvisational madness in the actors that still feels precise and controlled enough to tell the story. Sharon Farrell plays Cebe's mother with a tragic desperation, a woman trying to deny the cycle of abuse and addiction she's trapped in. Don Gordon plays one of the most predatory sleaze bags in the history of Cinema. As the director and ringleader of the set, Hopper improvises his way into one of the most messed-up abusive dads and husbands in movies, only a few steps to the depraved Frank Booth in David Lynch's Blue Velvet 6 years later. Then there's Manz. Hopper rewrote the script around her personality, and the movie becomes a record, a monument to her time in this world. Hopper was also one of the few directors who shot in long, uninterrupted takes at the time when film reels could run out, and cameras were large and bulky.

The movie is Linda Manz's show through and though: full of bravado on the one hand and wounded the next; the film captures all of her awkward outsiderness that Hopper seemed to identify with. The middle section of the movie feels like a documentary about the Punk movement in 1980 Vancouver. Dennis Hopper only directed six films in his career, and all his main characters, from Easy Rider to The Last Movie to Out of the Blue to Colors to The Hot Spot to Backtrack, are outsiders uneasily trying to find their place in the world. And Linda Manz is the most complete of them all, the most uncompromising, in Hopper's best and most complete movie.

The 4K restoration of Out of the Blue is now playing at the Metrograph in New York City. It will be released in Blu-Ray at a later date.

Out of the Blue 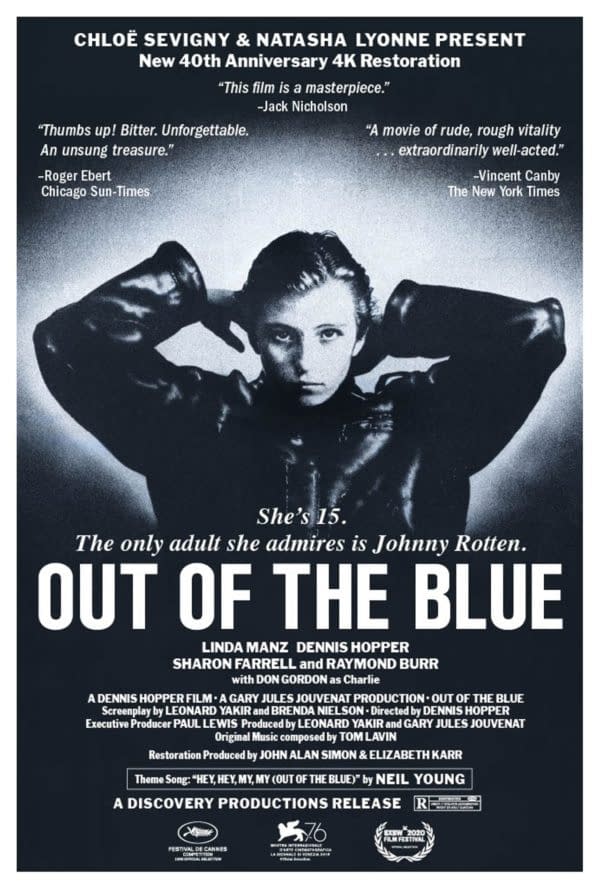 Review by Adi Tantimedh
9/10
Dennis Hopper's best movie, a dark tale of a teenager lost in a cycle of family dysfunction, addiction and abuse is a seminal Punk movie, a masterpiece with an astonishing performance by Linda Manz, is now restored to 4K and ripe for rediscovery.
Credits
Directed by Dennis Hopper

HBO & Steven Moffat's adaptation of The Time Traveler's Wife feels like an inferior retelling of River Song's story from Doctor Who.

ABLAZE has a sizzling roster of titles for August that include titles for diverse fans of action/fantasy, horror/sci-fi, gaming, and teen coming-of-age

Starting today, Hulu & Xbox are partnering up to offer streaming subscribers in the US a great deal of 3 free months of Game Pass on the PC.

Gangs of London, the hit cult ultraviolent gangster series from Gareth Evans, will return on AMC+ in 2022. Now here's a look at the teaser...

Neil Gaiman's The Sandman Act 1 will be getting a Hindi language audio drama version from Audible featuring a voice cast of Bollywood stars.

Thor: Love and Thunder: How Star-Lord is Different Plus 2 Images

Chris Pratt talks about how Peter Quill, aka Star-Lord, is different in Thor: Love and Thunder from the Guardians movies, plus two HQ versions of images.

We are less than a month away from the release of Jurassic World Dominion, so that means it's time for a whole bunch of posters.

Coming out of Lake Como Comic Art Festival is the news that Dave McKean, of Sandman, Mirrormask, Cages, and Neverwhere fame, is working on the new