The Last Duel might have good intentions, but the execution of everything from the script to the multiple points of view to the duel of the title seems to contradict those good intentions.

Director: Ridley Scott
Summary: King Charles VI declares that Knight Jean de Carrouges settle his dispute with his squire by challenging him to a duel.

For those who need a warning, The Last Duel contains a graphic rape scene shown not once but twice. If that is the sort of thing that triggers you, by all means, skip this one. You aren't missing anything. There isn't any better way to garner critical praise than a historical movie based on a true story. It's a tried and true formula that has worked countless times over the years, and The Last Duel is no different. By that notion alone, it is utterly unremarkable, but things do get worse from here. All of the pieces of this movie should work. It has a great cast that is putting in some amazing work, specifically Jodie Comer. It has one of the great directors of the last decade Ridley Scott behind the camera. It has two award-winning academy writers working on the script. Yet none of it comes together, and the very film itself contradicts the things that this movie is trying to say.

The first thing this movie intends to do is give Marguerite de Carrouges (Comer) a voice. As detailed in the book by Eric Jager and based on a true story, Marguerite was raped by Jacques Le Gris (Adam Driver) and went public with the accusation. This led her husband, Sir Jean de Carrouges (Matt Damon), to challenge Le Gris to a duel to the death so judgment could be determined by divine right. The issue is that no one has really told Marguerite's side of the story. The book in question tells Jean and Jacques, but screenwriter Nicole Holofcener had to basically write a script from nothing. The movie is told in the Rashomon effect where first we see Jean's truth, then Jacques', and finally Marguerite's. However, if the intention was to give Marguerite a voice and point out how the woman of this story is often shunted off to the side, why does she still feel shunted off to the side? If the intention was to make this about her, then why isn't her POV not only considerably longer but simply stated as the truth, not the truth according to anyone. Yet The Last Duel, for its good intentions of giving this woman that was horribly violated a voice and making a point that victims are so often ignored, is undermined by how much the movie doesn't dedicate itself to telling her story.

The trial that occurs is another moment in The Last Duel where good intentions are foiled by bad execution. Marguerite has to go before the court and tell everyone what happened to her. However, the men of the court use the fact that she once said Jacques was handsome against her. They ask her whether or not she felt any pleasure during the rape because that would have made it not rape. They grill on whether or not she orgasms when she has sex with her husband. They use the fact that she is pregnant against her. The intent here is to make a statement about how little has changed when it comes to how we talk about rape. The concept of orgasm, whether or not the victim expressed any sort of attraction to the abuser, these are all things that people familiar with rape culture know continue to happen in the court of law. People who know already know that nothing has changed, and victim-blaming continues to be a thing. This is very much preaching to the choir.

However, that is only apparent to someone who is familiar with rape culture. These sorts of warning signs are apparent to anyone who has been abused in this way, had to go to court, had someone judge them for what they wore when they were assaulted, said they deserved it; we all know these things. Someone who is unfamiliar with this would not make that connection. The way everything is worded makes it seem barbaric, and someone unfamiliar with this could easily walk out of The Last Duel relieved that rape trials aren't like that anymore. Once again, good intentions are crippled by poor execution.

Then there is the duel itself which takes up roughly the last thirty minutes of the movie. The duel is, for all intents and purposes, a dick measuring contest. Jacques and Jean are there to battle each other because they want to prove that they are better than the other. Marguerite and her violation are only the excuses that these two needed to cross swords. This is very apparent even in the movie itself, as Marguerite is not told that if Jean loses the duel, she will be burned alive for false accusations since him losing it proves that Jacques was innocent by the law of the time. Jean just wants to kill his rival and doesn't care that his obsession with honor could make their child an orphan should he lose. If the duel itself is essentially a dick measuring contest and more or less called that in the narrative, then why is the duel shot like it's some big, epic, and meaningful thing? Why does the marketing, camera, and score all want to emphasize this duel when it's a farse? Intention undermined by execution.

This is not to say that the multiple POVs shouldn't have been a thing. The differences between them are important, and it is those differences that really bring home the final point that all men, but precisely these two, are complete trash. Marguerite's should have been longer, with hers being a full hour and the other two spread out over the additional hour. The differences in the narratives are both subtle and completely obvious, which means that everyone involved did not think the audience was comprised of idiots and could recognize those differences. The rape scene in question is handled about as well as it could have been. There is zero nudity, so no titillation, and even in Jacques POV, it is clearly rape.

The cast, overall, is strong but there is one massive miscasting that really hurts the entire production. Comer, in particular, is absolutely stunning in this role, and Driver makes for an excellent example of a trash human being. Ben Affleck wrote Jacques POV and then cast himself as Pierre d'Alençon, who manages to not be the biggest blowhard in the movie by Jacques being a literal rapist. But while Damon's section is well written, he is miscast as a French knight, and there isn't a moment where he is believable in the role. Harriet Walter also puts in a fantastic performance as Jean's mother, Nicole de Carrouges. She, much like Marguerite, is living in a world that doesn't care about her well-being, and she has chosen not to fight back for completely obvious reasons.

The Last Duel likely wants to be many things; an Oscar contender, the return of the Damon/Affleck dream team, giving the many women who were violated by Marguerite but couldn't speak up a voice. Still, those intentions don't match up with the movie that we got on screen. Everyone involved clearly had the best of intentions, but sometimes there are issues when it comes to making them a reality. The Last Duel should have been good, all the pieces are there, but instead, we're left with a frustrating movie that really wants to say something and then mumbles to the point that no one can understand the words. The only thing that we do know by the end of the credits is that all of the men in Marguerite's life were utter trash, and she deserved so much better. 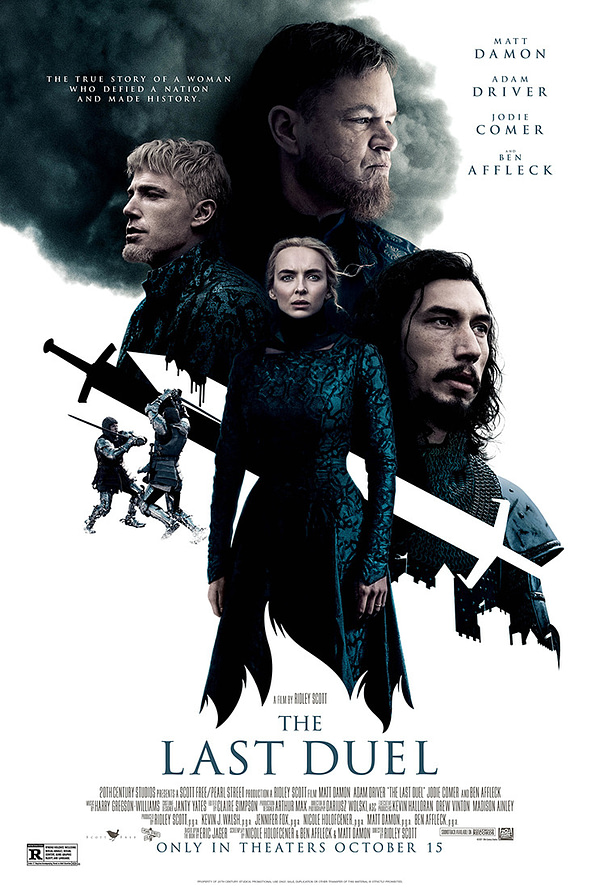 Review by Kaitlyn Booth
4.5/10
The Last Duel might have good intentions, but the execution of everything from the script to the multiple points of view to the duel of the title seems to contradict those good intentions.