The Little Things starts off as a paint-by-numbers cop thriller that is utterly mediocre aside from good performances from its main cast until the end when it completely falls apart.

Director: John Lee Hancock
Summary: Kern County Deputy Sheriff Joe "Deke" Deacon (Washington) is sent to Los Angeles for what should have been a quick evidence-gathering assignment. Instead, he becomes embroiled in the search for a killer who is terrorizing the city. L.A. Sheriff Department Sergeant Jim Baxter (Malek) is leading the hunt, and unofficially engages Deke's help after becoming impressed with his cop instincts. But as they track the killer, Baxter is unaware that the investigation is dredging up echoes of Deke's past, and uncovering disturbing secrets that could threaten more than his case.

When it comes to jokes, everyone knows the classics, but good delivery can make something as simple as "why did the chicken cross the road?" funny again. A new take doesn't need to remake the wheel to be good or even be innovative. If the presentation and delivery work, then you won't feel like you wasted your time even if the project doesn't change your life. In the lead up to The Little Things, that is very much what the movie looked to be; another cop and serial killer movie elevated by an extremely fantastic cast. For most of the runtime, that is exactly what is going on. The three leads all do a fantastic job of bringing life to the archetypes that we have seen a million times in these movies. Denzel Washington, Rami Malek, and Jared Leto are all putting their best foot forward to try and make this the best movie it can possibly be, and they all do an admirable job. It's just a shame how badly it all falls apart in the end.

This weekend, there will be an in-depth spoiler-filled analysis about why the ending of The Little Things is not only bad but incredibly tone-deaf. This is one of the first star-heavy cop movies that we have had after the #BlackLivesMatter protests over the summer, calls to defund the police, and holding the police accountable for their actions. However, this genre of detective movie isn't about accountability, and The Little Things had a very careful line to walk before the summer of 2020 — but after? The Little Things managed to walk off the line and then right off of a cliff.

Director John Lee Hancock does an admirable job of presenting The Little Things with all of the grime that one would expect from this sort of genre. The murders in question focus on young women, but Hancock does not focus on the brutal things that are done to their bodies. He keeps his camera pointed away from the bodies that we see, and the most "lurid" shot is from across the road and doesn't seem like titillation. They are there, we see them briefly, and then we move on. It's a calculated move that makes more sense as the movie goes on. The detectives start out handling things rather by the book and going about this in the most professional and unaffected way possible. As time goes on and they become more and more invested, everything about the movie feels like it takes on more emotion. It's as if the production itself is evolving as these two detectives slowly start to spiral with a need to catch this killer and their focus on Leto's suspect.

A cop movie is all about the mystery that is to be addressed in the end. The Little Things is about a former detective and a young all-star teaming up to try and track a killer down that is haunting their streets. However, when you're centered around solving a mystery, the answer needs to be worth it, and that is where The Little Things stumbles the most. The ending does not live up to the mystery that came before it. If they had managed to stick the landing, The Little Things would be that sort of movie that you'd watch, and then when you stumble across on cable late at night, you'd watch again because you're bored. But as soon as that ending came into play, everything before it fell apart, and no amount of good performances from Oscar winners can make up for that. 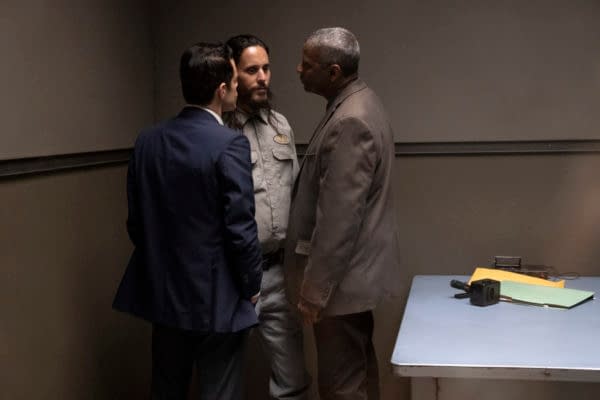 Review by Kaitlyn Booth
3.5/10
If they managed to stick the landing, The Little Things would be that sort of movie you watch and sometimes see on cable late at night, and you watch because you're bored. As soon as that ending came into play, everything before it fell apart, and no amount of good performances from Oscar winners can make up for that.