The Protégé isn't going to change anyone's life, and it isn't unique enough to really stand out amongst the rest, but it has some great action beats anchored by an excellent performance from star Maggie Q.

Director: Martin Campbell
Summary: Rescued as a child by the legendary assassin Moody (Samuel L. Jackson) and trained in the family business, Anna (Maggie Q) is the world's most skilled contract killer. But when Moody – the man who was like a father to her and taught her everything she needs to know about trust and survival – is brutally killed, Anna vows revenge. As she becomes entangled with an enigmatic killer (Michael Keaton) whose attraction to her goes way beyond cat and mouse, their confrontation turns deadly, and the loose ends of a life spent killing will weave themselves even tighter.

When it comes to the assassin and spy genre, we've pretty much seen it all at this point. We've seen the good, we've seen the bad, and we've seen the movies that really stand out among the rest and become cult classics. Unfortunately, The Protégé likely won't be a cult classic, but it does what it sets out to do, and it does it well. The thing that really makes this one stand out is one single part of the plot, and that is our heroine is fighting for revenge, and she is fighting for herself. So often, women in spy and assassin action movies are protecting someone; a weaker man, a child, someone that needs protecting, and the movie becomes them putting themselves in harm to protect others. Anna, played by the always fantastic Maggie Q, is more here to protect anyone. She found the man that saved and raised her dead, and now she wants answers, she was revenge, and she wants the people who killed him to pay. It's a tale as old as time, but it's unique in the sense that we don't see that narrative applied to women in action movies.

The Protégé doesn't hold back just because Anna is a woman either. We see her brutally tortured; we see her shot; we see her go through all of the things that her male counterparts go through. She doesn't have to go undercover in a strip joint or anything like that. That's not to say it's a sexless movie, not at all, but aside from a dress that Anna wears to dinner, her body isn't being used as a sexual object in that way. She's a woman wearing an eyecatching dress because she wants to be noticed, and that's all. It's a nice change of pace, and if everything else around the movie were a little better, it would really make the movie stand out.

The story, as previously mentioned, does stand out in how it treats Anna as a character and how she moves through this world, but the world itself is every spy and assassin movie we've ever seen. Aside from Anna being able to do what all of the boys do in their movies, there isn't a unique story point in this entire production. Even the second act twist is one that you can see coming from a mile, and the movie does so little to hide it that it is spoiled in the officially released images on the Lionsgate website. Maggie Q is a movie star, she always has been, but writer Richard Wenk isn't giving her any original material to work with. It makes the second act drag and makes a movie that is under two hours feel much longer. That means pacing issues, and there are absolutely some in this.

Director Martin Campbell does know how to direct an excellent action scene, and with Maggie Q as your star, they all look brutal and realistic. This is the sort of action movie that makes you wince when you watch it because that looked like it hurt. Much like other recent action scenes, there isn't anything overly flowy about these fights. Anna goes for the headshot whenever she can, much in the same way John Wick does in those movies. This isn't someone trying to injure their opponent; Anna is a killer, and she isn't willing to hold back. Then there are the scenes with Michael Keaton. Despite turning 70 next month, Keaton still looks like he could kick some serious ass. Campbell holds his camera steady, and it's easy to follow the fight scenes. You know where each person is, and you aren't ever c0nfused about the locations. Keaton is excellent in this role, but this isn't his movie; it's Maggie Q's, though you'd never know that judging by the billing order, which puts him above her for some reason.

The Protégé could be the solid start to a new franchise if it manages to find an audience. All of the pieces are there for a great movie in the future if Maggie Q and others are given more to work with. A truly original screenplay with Campbell's directing and Maggie Q's scene-stealing performances could easily create one of the best action movies of the last ten years. However, The Protégé in its current form brings very little to the table that's new and in a saturated market with people hesitation to even see a movie, which might not be enough to get them the sequel they deserve. 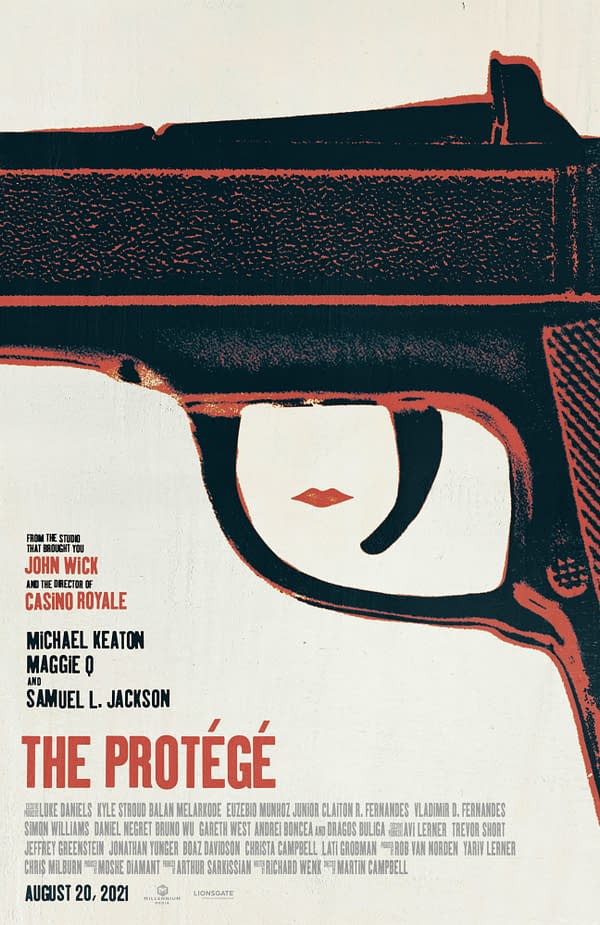 Review by Kaitlyn Booth
7/10
The Protégé isn't going to change anyone's life, and it isn't unique enough to really stand out amongst the rest, but it has some great action beats anchored by an excellent performance from star Maggie Q.