There's a line two-thirds into The Show, the first movie by Alan Moore and Mitch Jenkins, that may be the most important. Nicky Matchbright, both the Devil and an old music-hall comedian played by Robert Goodman, tells the hitman/detective Fletcher Dennis played by Tom Burke "pay attention to the background, it's just foreground trying to hide." And that is so much The Show right there. The film will deserve repeat viewings, there are some aspects that only make sense if you read newspaper headlines on hoardings, adverts in the newsagent window, or pieces of graffiti around Northhampton. An entire world of businesses and brands, websites, and musical tastes have been created from whole cloth to stitch this place together.

The trailer to The Show did not do this film many favours – it was in keeping with Show Pieces, and painted The Show as a full-blown horror movie – fine for FrightFest where this movie premiered in the UK, but not great for the actual film. Sure, there are horrible things that happen in this movie, freakish oddities in real life and in dreams, but the trailer had nothing of the comedy in this movie, throughout. It is a very a funny film, with some frankly hilarious performances. Principally Bradley Johnas as Elton Carnaby, a nightclub bouncer who is two minds about everything, the hospital portee in a Bauhaus shirt who brings to mind the porter from Macbeth, Antonia Campbell-Hughes as a mesmerising and wise Monica Beardsley, and Ellie Bamber as Becky Cornelius, the insecure Northampton tour guide, which is handy for dropping the kind of information about Northampton that Alan Moore loves to drop at every chance he gets.

And then there's Alan Moore himself, playing Frank Metterton, both God and the other music-hall comedian in glittery gold paint in a moon hair/beard style, who is a far better actor than anyone could have expected, funny, dark, and convincing, a little like the film itself. I went into this film expecting something good, but also really disturbing and not enjoying it in the classic sense expecting it might even be a worthy ordeal. Instead I found myself with belly laughs, something closer to Hot Fuzz than Blue Velvet, with a classic gangster/detective/revenge plot dropped on top of the town of Northampton, which responds with its own madnesses. And what is also clearly intended is that this doesn't just mean the denizens of Nighthampton Below, but everyone who lives in the regular town as well. The retired superhero from Soho who has adapted to modern times, playing the role of the watcher. The Hitlerian pop star for whom it's all just a laugh. The detectives who meld Bugsy Malone with Ramond Chandler but need paying, as they say, "the solar panels on the roof don't pay for themselves". The regal drug dealer/manufacturer who is a font of knowledge. The taxi drivers who will scream anything to be first in the book, while hanged men and crows take the place of fluffy dice. While, all the time, the outside world continues to threaten to break in. But all within that classic movie plot structure, with Tom Burke filling the role as a plodding reluctant gumshoe admirably, heading straight to wherever the plot will lead him. There's even a gunfight. The film tries to repeatedly show division, that there is black and white and nothing in between, but then shows us that the division is a myth and there is no such thing. We are all one reality, live with it.

And finally, for those who have been watching the previous short films known as Show Pieces, it all makes sense. You will gasp at what happened to Faith Harrington, played by Siobhan Hewlett. You will see just what happened to James Mitchum, played by Darrell D'Silva, and why he was there in the first place. And you will know the secrets of Jimmy's End, Metterton, and Matchbright. Because, in The Show, Alan Moore has written an origin film for Show Pieces. Which means, yes, there is plenty of weirdness in the world of St Jimmy's End, but we learn a) why everything in Show Pieces was happening b) what you can do about it, and c) where it could go, going forward. It's not necessary to enjoy the film, at all, but it will give you payoffs that some of us have been waiting for, for a decade. I do hope we don't have to wait so long for the TV series. Alan has already written the first episode…

The Show played on Spanish streaming services last week, in US cinemas on the 26th, and at Frightfest yesterday. There is a live streaming from Frightfest planned for 6pm BST, on Wednesday, the 1st of September, and wider streaming from the 18th of October. Other opportunities may be made available – I suggest you take them. 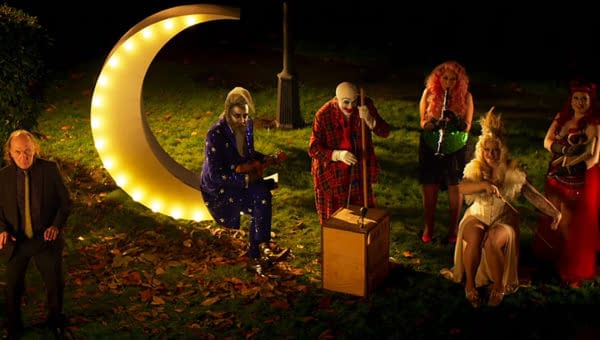 2000AD publishers Rebellion are diving into their IPC archives to deliver something very different, a collection of what they describe as Britain's

Visions of the Daughters of Albion was a 1793 poem by William Blake, in which Oothoon, the "soft soul of America", is raped and loses her virtue,

Sparks Of Chaos #1 launches from CEX Publishing in September 2022, by Temur Schelm, Alexander Malyshev and Gleb Melnikov, a steampunk tales of ancient

Benjamin W Morse is not Ben Morse, former staff writer at Wizard and then Editorial Director of Digital Media at Marvel Comics. But it must be a common

Dark Crisis is coming, the solicits run below, previews of Dark Crisis #1 abound, and DC Comics wants you to know all about what's going down in the

The writer behind the 2002 film Jason X celebrated its anniversary by discussing details including the consistent rules of Friday the 13th.

The Flash star Sasha Calle shares how she reacted to seeing herself in costume as the first Latina Supergirl of the DCEU.

Avatar producer Jon Landau offers his thoughts on the previous 3D trend in movies, and where several of them may have gone wrong.

Top Gun: Maverick star Glen Powell recently shared that both the first film and Tom Cruise contributed to his aspirations as an actor.

Zeus, Gorr in New Trailer for Thor: Love and Thunder, Plus Poster

Marvel Studios and Disney have released a new trailer for the upcoming Thor: Love and Thunder, and it looks awesome. It will be released on July 8th.

Paramount Pictures has released a Top Gun: Maverick behind-the-scenes featurette showing how they got some of those insane shots inside the planes.