Venom: Let There Be Carnage knows exactly what it wants to be, shows up, and then ends before it gets overly long. While not a great movie, it's much more tonally consistent than the first one and leans into the things that worked.

Director: Andy Serkis
Summary: Over a year after the events of Venom (2018), investigative journalist Eddie Brock struggles to adjust to life as the host of the alien symbiote Venom, which grants him super-human abilities in order to be a lethal vigilante. Brock attempts to reignite his career by interviewing serial killer Cletus Kasady, who becomes the host of the symbiote Carnage and escapes prison after a failed execution.

There were a lot of things that made Venom a frustrating experience, but the biggest one came down to the fact that star Tom Hardy seemed to be acting in a completely different movie from everyone else around him. It made his performance stand out but not really in a good way. He was going for it, but it didn't mesh with everything else around it. Venom: Let There Be Carnage has gone the opposite route and instead has leaned into that completely buck wild performance and made it the centerpiece of the entire movie. The script has taken Eddie and Venom's back and forth and made it the most entertaining part of the whole movie. They bicker like an old married couple, and Hardy's exasperated face as CGI black goo moves around him is commendable, to say the least. His performance is just as good as the first one, only this time, everyone around him is at least in the same stratosphere.

That's to say that the best moments in Venom: Let There Be Carnage go to any moment Eddie and Venom are just hanging around and having arguments that only Eddie hears both sides of. A good portion of the movie is the two of them bickering as they really come to terms with each other. Sometimes, you fight with your other half, these things happen in relationships, and the movie goes out of its way to say that Eddie and Venom need some couple's counseling. They aren't wrong.

The problem with making this the primary focus of Venom: Let There Be Carnage while keeping the runtime under 100 minutes is that some people get a little lost along the way. This is the Eddie and Venom show, and there isn't really much for anyone else to do. Michelle Williams is on hand as Anne to do absolutely nothing but be an eventual damsel in distress. Peggy Lu manages to poke through the Eddie and Venom show as the store owner who knows about Venom and seems weirdly all right with it. At the very least, Reid Scott is not kicked to the side as the man not good enough for Anne and steps it up. It's the villains; however, that really get the short end of the stick.

Woody Harrelson is probably one of the only actors who could have thrown himself into a role like this and meet Hardy on that insane level, and he really does. He plays Cletus as part romantic while also channeling every single serial killer known to man. He's given a decent amount of screentime, but he requires a lot of explanation, unlike Eddie. Carnage doesn't come into play for a good third to a half of the entire movie. He's in the title, but he very much doesn't feel like part of it, which is kind of a shame for fans of the character. Carnage is less of a character in his own right in this movie and more of just an obstacle that Eddie and Venom need to get through so they can come to terms with each other. Shriek is another character that gets almost no buildup and no screentime. She has a whole subplot that feels like it was a much bigger deal in previous drafts, but it very much gets sidelined in this one. The relationship between these two characters is supposed to be extremely important, but the movie doesn't give us the time we need to really see that.

Director Andy Serkis does a pretty good job with this production, but unfortunately, with both Venom and Carnage being CGI, the screen can get overly busy when they are fighting each other. In particular, that final fight scene becomes a bit tiresome after several minutes of goo monsters throwing each other around a room. The most interesting thing they do in that scene is probably one of the best moments in the movie, and the stakes are really felt. However, that gimmick doesn't last very long, and then Carnage and Venom are throwing each other around the room again. That final fight scene could have been shortened by quite a few minutes, and that time would have been better served by giving Cletus or Shriek more screentime. There are quite a few scenes with Venom that also could have been significantly shortened to give Cletus or Shriek more time since the runtime and pace actually fit the movie quite well.

Venom: Let There Be Carnage isn't going to change anyone's life and doesn't bring anything new to the table when it comes to the superhero genre, but it does what it wants to do and doesn't stretch itself needlessly out. The tonal consistency really helps shine a light on how much fun Hardy is having with this completely insane performance which is a good thing. The filmmakers seemed to have realized that the best scenes are Hardy playing off a voice that only he can hear. If they get a third movie, maybe they'll strike the perfect balance. For now, this one is fine, and fans are sure to enjoy it. Also, stay through the credits.

Venom: Let There Be Carnage 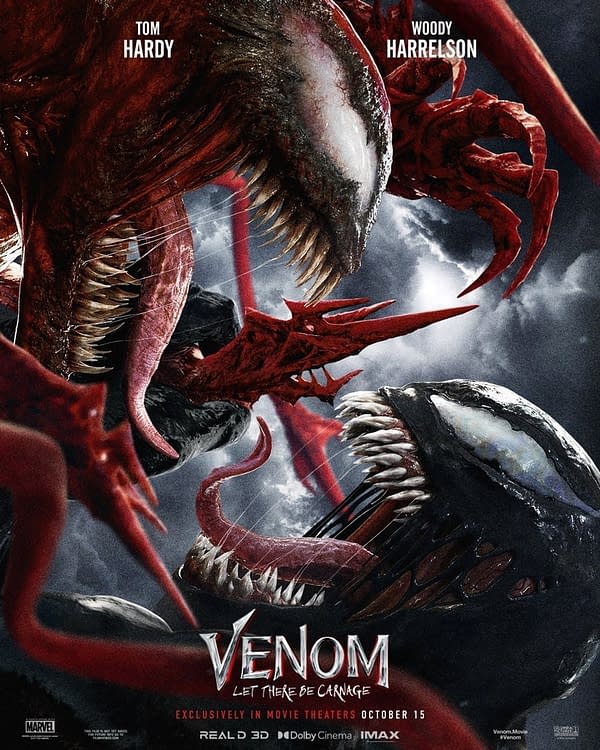 Review by Kaitlyn Booth
6.5/10
Venom: Let There Be Carnage knows exactly what it wants to be, shows up, and then ends before it gets overly long. While not a great movie, it's much more tonally consistent than the first one and leans into the things that worked.

The trailer for the live-action film Root Letter, based on the Japanese video game, is finally here, with its own original story.