Avant-pop artist Will Wood is a name that has been seen quite a bit on our site as of late. With a new album, In case I make it, and a whole tour underway now, Will's career is headed across the contiguous United States before slowing to a seeming halt due to "indefinite hiatus" at its conclusion. This is all well and good, but we needed to ensure we saw this tour in action before that point. As such, we got tickets to the In case I make it, tour leg at the Rapids Theater in Niagara, NY, for August 17th, and here's what we thought of the event!

The Rapids Theater in Niagara, NY, is situated in a fairly unsavory part of town, it would appear. The venue itself is likely in need of a bit of renovation and preservation. When my associate, fellow Bleeding Cool contributing writer Brittney Bender, and I got there, there was already a small but sizable line formed out front. The event staff was a bit short with us when discerning VIPs from General Admission. We were initially unsure about our role, being press, and the first event staff member we saw was rude and relatively unhelpful to that end. However, other event staff treated us quite a bit more respectfully, which was important to us. We soon got ourselves seated and situated for the first opening act.

Endless Mike, also known as Mike Miller, is the frontman for the band Endless Mike and the Beagle Club. His music was poignant and punky, with a whole slew of folk rock mixed in, which was quite reminiscent of The Decemberists. The music performed was often morose and despondent, but that's what we were getting ourselves into when attending a concert by Will Wood, right? There were a couple of issues with Endless Mike's mic having to do with reverberation, but this may have been wholly intended unless the mic check was done by somebody else. Unfortunately, Britt had a few focus issues with her camera, so we couldn't get a good shot of Endless Mike during this time, but we still enjoyed what we were listening to.

The next opening act for Will Wood was a fellow named Matt Pless. Matt Pless gave Britt a bit of a Simon & Garfunkel vibe during his set, in which he utilized his guitar for its first half and a recording of music in its second. Pless's guitar work was pretty great, and his lyrics were often edgy and angsty, which did well for him. During the recording-accompanied half of his set, we were a bit confused about the tone shift, but he did well with his vocals in that portion, so it was fine (I was reminded a bit of early Jason Mraz – which felt a bit out of place but not horrible). Overall, Matt Pless is an entertaining individual to watch; I just wish we got more of his guitar work during the act.

Shayfer James, an indie musician, known especially for his darker songs, was the last opening act before Will Wood was set to perform. His music was fun and lively, and his stage presence can best be described as "highly darkly charismatic." What took me quite by surprise were two particular moments during his set: one was during his song "God Forbids," a song he put together during the COVID-19 pandemic. In the middle of his performance, he stopped and praised his violinist for the studio recording, who was seated in the audience. This was endearing and heartfelt. The other time was when he performed "Pile of Bones," a song he wrote as part of a musical about the mythical hero Beowulf, entitled The Ninth Hour. The performance of that song was very memorable.

Finally, Will Wood's headlining act began at about a quarter to 10 in the evening. He opened his performance with a bit of comedy, namely discussing the "elephant in the room," his fade haircut. He then went on to perform his song "Cicada Days" on a baritone ukelele (which was remarked upon as a "small guitar."

After this, he performed another song, "Becoming the Lastnames," from his new album In case I make it, before pivoting to his keyboard for his song from 2020s The Normal Album, "Marsha, Thankk You for the Dialectics, but I Need You to Leave." The concert went on with many memorable songs like "Against the Kitchen Floor," "The Main Character," and "White Noise." All the while, Will Wood made many quips at the expense of conservative ideologues such as Jordan Peterson and Ben Shapiro (all of which were absolutely scathing).

At the conclusion of the concert, Will performed a few more of his staple selections, finally wrapping the night up with "Thermodynamic Lawyer Esq, G.F.D.", a very angst-filled and raucous piece that was uncharacteristic of the prior songs in the concert. It was a sight to behold. Contrary to what we had come to believe, maybe that side of Will Wood's music will return again in years to come.

Ultimately, we'd love to see Will Wood's career flourish further with new art and music produced, but as with all other living things, sometimes they have to take a breather. And that's who Will Wood is. He is a living, breathing human being and is deserving of breaks where he needs them. This tour was an amazing time, and Britt and I had an absolute blast attending it. We hope anyone interested in his music will do the same on future tour legs.

Will Wood's "In case I make it," Tour 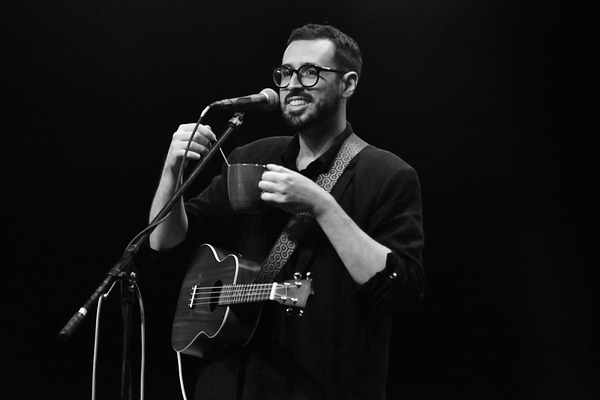 Review by Joshua Nelson
8.5/10
While the venue left something to be desired, each of the four acts performing was something worth seeing. Shayfer James and Will Wood particularly delivered witty, emotive, and often powerful performances.

Josh Nelson is a Magic: The Gathering deckbuilding savant, a self-proclaimed scholar of all things Sweeney Todd, and, of course, a writer for Bleeding Cool. In their downtime, Josh can be found painting models, playing Magic, or possibly preaching about the horrors and merits of anthropophagy. You can find them on Twitter at @Burning_Inquiry for all your burning inquiries.
Comments will load 8 seconds after page. Click here to load them now.

Magic: The Gathering: Top Five Cards We Would 100% Eat, No Cap

There are many Magic: The Gathering cards we would love to get a bite of, but these ones are the most delectable in our opinion!

In this first official part of our series on Magic: The Gathering's Archenemy: Nicol Bolas schemes, we analyze how the first two work.

We were offered a chance to preview a card from The Brothers' War, Magic: The Gathering's next set. Here it is!

In this first of eleven installments in our series on Magic: The Gathering's Archenemy: Nicol Bolas set, we discuss the release's history.

Magic: The Gathering: The Brothers' War Preview Season Kicks Off!

Preview season for The Brothers' War, Magic: The Gathering's newest set, has kicked off at last. Let's take a look!

Have you ever wanted beer that tastes like chili cheese dip? Well, now you have it as Hormel has a new drink for you to buy.

Check out excerpts about Lilith & Lagertha from Women of Myth, Simon & Schuster's new illustrated guide, ahead of its February 21st release.

Rockstar Energy has a couple new flavors for you to try from the Recovery line, highlighted by Strawberry Lemonade.

Looking to see several YouTube, Twitch, and social media creators duke it out in boxing matches? Creator Clash is coming back.

Looking to add the heat with a bit of Baja Blast? Mountain Dew will release a new hot sauce next week with their famous flavor.