Channel 4's Don't Hug Me I'm Scared is a series that perfectly responds to the absurd and nonsensical horrors of the modern world. Originating from the series of videos that began on YouTube over 11 years ago, the story would go on to have six episodes on the channel. A good recommendation would be to go back and watch those videos before proceeding with the new series so you'll catch the hilariously twisted Easter eggs.

To get things started, here's a quick look & overview, so that everyone's on the same page:

It's the mixed-media trip that moves from kids-show pastiche to fever-dream horror in the blink of an eye. Building on the cult YouTube show, which has been viewed over a quarter of a billion times, the Channel 4 series will follow Red Guy, Yellow Guy and Duck as they continue their disastrous learning journey. This puppet musical extravaganza is helmed by original creators Becky Sloan, Joseph Pelling & Baker Terry.

Don't Hug Me I'm Scared, being given the resources and more to expand upon what made it so great on YouTube is fantastic to witness. The details in what could appear to be such a simple show are what make the series so outstanding compared to other dark comedies surrounded by multi-colored contrasting horrors. Themes are present in each episode while also dropping hints at the existential story being told.

Breaking apart the constructed expectations of puppetry from childhood, Don't Hug Me I'm Scared comforts the senses with the familiar while disrupting the moment with some of the most hilariously dark moments ever witnessed. While shocking at times it also becomes a series to watch over and over again just to catch the referential Easter eggs that develop such an odd yet lovable world. Anyone can relate to being one of the characters at any moment in their lives. The series has commentary which produces some profound inner dialogue over the big parts of modern life, such as work, death, resources, and more.

Don't Hug Me I'm Scared continues to surprise during each episode of season one and leaves room for wanting more answers to the questions left dangling at the end.  The jokes inside other jokes continue to bring priceless moments to the screen. The changes to the introduction and theme at the beginning of each episode as the season continues are so amusing and incredibly smart. There is a quick wit and insane level of creativity in the series that leaves me begging for another season of this off-the-wall trio.

Don't Hug Me I'm Scared is directed by Pelling, Sloan & Terry. The three also worked on writing the episodes alongside Charlie Perkins, Natasha Hodgson, and Sam Campbell. The incredible voice work and puppeteering include some of the creators as well. The season can be streamed on Channel 4 now. 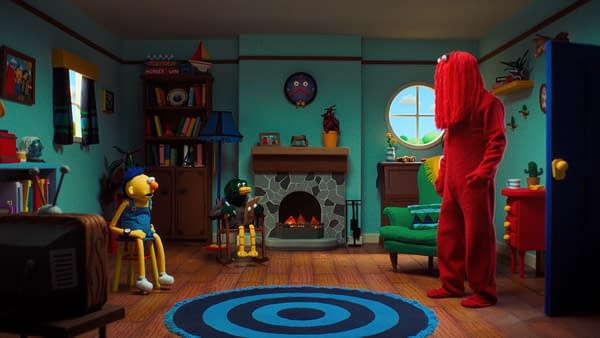 Review by Brittney Bender
10/10
The first season of Don't Hug Me I'm Scared perfectly encapsulates the absurdity and horror of the modern world through the lens of a multi-colored puppet nightmare of epic proportions.
Credits
Network
Channel 4

We've learned that four WWE Hall of Famers will join "HBK" Shawn Michaels in announcing who will be in the NXT Iron Survivor Match.