AEW Rampage was taped in Philadelphia this week, which might make you think it would be a skippable show. But you can never underestimate Tony Khan's desire to ruin The Chadster's life by putting on exciting and crowd-pleasing wrestling shows. Luckily, despite everything Tony Khan has done to The Chadster, The Chadster remains completely unbiased in his pro wrestling journalism. Now here's Everything The Chadster Hated About AEW Rampage.

Punk beat Garcia, which wasn't a surprise, even with 2.0 at ringside to help out. It also wasn't a surprise that these two put on a great match. But it was very disrespectful to WWE, who only had about 25 minutes worth of time for wrestling in total on Smackdown earlier in the night. You would think Tony Khan would see that and lighten up on the wrestling to not make WWE look too bad in comparison, but Tony Khan has no respect for the wrestling business. Auughh!

Tony Schiavone interviewed Dante Martin, Lio Rush, and Matt Sydal. Sydal questioned Rush's credentials as a financial advisor or whatever his gimmick is. Rush promised to get Sydal a match with CM Punk on Rampage next week. Personally, The Chadster finds it extremely disrespectful to WWE that Lio Rush changed his mind about retiring. AEW doesn't need more talent working for them. It's very unfair.

The Acclaimed unsuccessfully challenged The Lucha Brothers for the AEW Tag Team Championships. In yet another example of unfair collusion, the fact that the Lucha Brothers are also AAA Tag Team Champions was flaunted by commentary. The Chadster is really sick and tired of these companies ganging up to bully The Chadster's beloved WWE. Auugh! So unfair!

The match was good. The Lucha Brothers are on another level, which is also very unfair. The Chadster was ready to cry by the time this match was over. The Chadster hopes that makes Tony Khan feel like a big man.

Jade Cargill squashed Skye Blue in a quick match, which was very disrespectful because AEW was just copying WWE, who put on two two-minute women's matches on Smackdown. But Thunder Rosa made the save when Cargill tried to hurt Blue after the match, setting up a future angle, which shows that Tony Khan still has a lot to learn about wrestling.

Mark Henry did a second interview ahead of the main event with Ricky Starks and Brian Cage. With enough talk had, it was time for the main event, a Philadelphia Street Fight. Personally, The Chadster doesn't even understand how AEW is allowed to put on a street fight in Philly. WWE bought the rights to ECW fair and square and it's extremely disrespectful for AEW to continue their legacy like this. But that's just one of the many ways that Tony Khan proves how little respect he has for the wrestling business in his pursuit of totally ruining The Chadster's life. Cage was about to win the match when Hook and Powerhouse Hobbs interfered, so a busted open Starks was able to retain the title.

The Chadster was looking forward to a nice, low-key, taped episode of AEW Rampage this week, but Tony Khan just doesn't know when to take his foot off the gas so Rampage went all out, totally ruining The Chadster's night. The Chadster is still upset about the next day. What does Tony Khan have against The Chadster? Why is he doing this to The Chadster?! Auugh! It's so unfair! 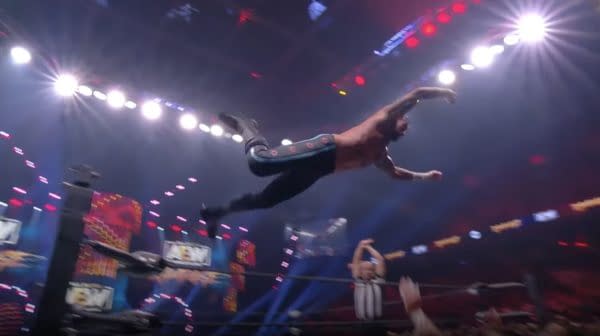 Review by Chad McMahon
7/10
Once again, AEW put on an unnecessarily good episode of AEW Rampage. It would be okay to take it easy once in a while but Tony Khan will apparently never rest in his mission to make The Chadster's life miserable and ensure that The Chadster remains permanently sexually impotent. Auugh man!